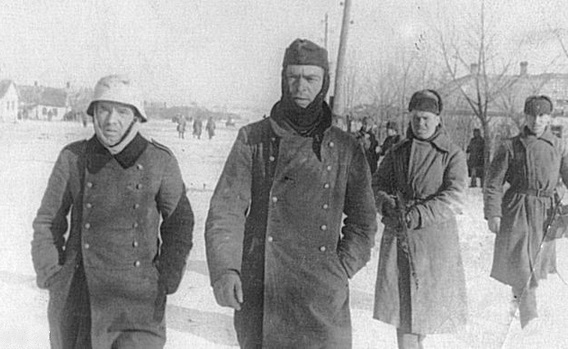 In the form in addition to the external aspect of important and functional. Soldiers of any country on the battlefield should be convenient and practical outfitted.
According to art historian M. R. Kirsanova, the war in blue to recognize friends and foes. S. V. Struchev, costume designer completes this statement as: “To see whom to shoot. Because the contact between the shooter and opponent visual”.

Soldiers of the red Army was well equipped at any time of the year. In the summer of used caps and helmets. The most common were helmet SSH-40. In its creation participated Semyon Budyonny, check the helmet blows of bombs and firing of the revolver. Introduced winter hats with earflaps with the descending headset, which is well protected from frost. Part of the lightweight uniform also consisted of a cotton shirt with chest Welt pockets, harem pants. Things could be stored in backpacks or duffel bags. Drinking water out of glass flasks, hung in the bag to the belt. Garnets were also worn on the belt in a special bag. In addition, the kit included a bag for gas mask and ammunition. Ordinary soldiers wore a raincoat-tents, which could be used as raincoats. Winter form was supplemented with a coat or cotton coat jacket, fur gloves, boots and cotton trousers.

Uniforms of the red army, it seemed, was left to chance: in the haversack of a sample of 1942 there was even a compartment for an axe. Described the condition of his clothing in a letter to one of the soldiers: “My clothes are pretty shabby and for home values is not.” As well talked about army uniform Professor P. M. Shurygin, member of the Rzhev battle, “Soon get quilted pants, jackets, warm underwear. With the snow will give boots. The material is sturdy, so you wonder how much of this prethe red material comes from.” From the memoirs it is evident that the uniform of the red army was high quality and practical. Numerous pockets, bags for ammunition, they have considerably simplified military life.

German soldiers were made at the factory of Hugo Boss. It included: a steel helmet with two-sided cover, overcoat, gas box, sword belt, rifle ammo pouches, a Cape, a bowler hat. Uniforms of the Wehrmacht was full for the European territory. Frosty the Eastern front demanded a completely different approach. The first winter the soldiers were freezing. The second has already prepared: in the uniform was introduced, insulated jackets, down pants, wool gloves, sweaters and socks. But it was not enough.

Despite the fact that the Soviet form was much heavier and easier to manufacture, it was considered more suitable for military operations in winter. Reconstructor club “Eastern frontier” Yuri Girev commented on the difference in the uniforms of key stakeholders: “the Form of a soldier of the red Army was much warmer form of the Germans. On the feet of our soldiers wore barren boots. Often used boots and puttees”. One of the German representatives of the Wehrmacht in the close message wrote: “Passing through Gumrak, I saw a crowd of our retreating soldiers, they are trailing in a variety of uniforms, wound on themselves with various items of clothing just to stay warm. Suddenly one of the soldiers falls into the snow, the other indifferently pass by.”

British soldiers wore a field uniform: a blouse with a collar or a wool shirt, steel helmet, loose pants, gas bag, a holster on a long belt, black boots and overcoat. By the beginning of the Second world war it adopted a new uniform. Regular units of the British army received its last because we first had to equip new recruits and those whose clothes had already lost a decent look. During the war, there were minor changes: the collar and other clothing items appeared lining that does not RUB andLa rough twill, buckles were produced with the teeth.

British soldiers Often had to wear a heavy cloak “tropal” with feather lining. To keep warm, they were worn under helmets knitted balaclavas. Russian historian Igor Drogovoz appreciated British uniform: “the Uniforms of soldiers and officers of the British army became a role model to all the armies of Europe. In Frenchy khaki soon began to change all of the European military caste, and the boots and puttees Soviet soldiers took Berlin in 1945”.

the Uniform of an American soldier is objectively considered the most comfortable and sophisticated for the circumstances of the Second world war. She focused even in the development of uniforms in the postwar period. Part of the form consisted of a wool shirt, lightweight field jacket, trousers with canvas gaiters, brown low boots, helmet or field cap. All of these things replaced overalls twill. Functionality differed all the clothes of a U.S. soldier: jacket fastened with a zipper and buttons, was fitted with slotted side pockets. The best equipment of the Americans was the Arctic set that consists of warm jackets, parkas and lace-up boots with fur.

during the Second world war, the Japanese have had uniforms of three types. Each of them consisted of tunic, trousers, overcoat and cloak. For warm weather, cotton was provided for the cold – wool. The kit also had a helmet, shoes or boots. Japanese soldiers for military operations in winter conditions are the operations in North China, Manchuria and Korea. There was used the maximum of the insulated form. Of course, for the harsh climate she didn’t come because he had an overcoat with fur cuffs, a quilted woolen trousers and pants. In General, it is difficult to call the Japanese outfit functional. It is suitable only for certain latitudes with a tropical climate.

Italian soldiers in BPemya Second world wore a shirt and tie, single-breasted jacket with a waist belt, breeches and puttees or wool socks, knee socks, shoes ankle. Some soldiers preferred to wear breeches. Uniforms are not suitable for winter campaigns. The overcoat was made of cheap coarse cloth, absolutely no heating in the cold. Army was not equipped with winter clothing. The warmed variants had only the mountain troops. The Italian newspaper “Province of Como” in 1943, noted that only a tenth of the soldiers in the period of stay in Russia was supplied with proper uniforms. In his memoirs, the soldiers wrote that sometimes the temperature reached minus 42 degrees, so many died from frostbite, and not in the course of military operations. Italian statistics command reports that only during the first winter from hypothermia suffered 3 600 soldiers.

French soldiers fought in the colored uniform. They were outfitted in a single-breasted jacket buttoned, double-breasted overcoat with side pocket flaps. The floor of the coat could be buttoned back to make it easier to walk. The clothes there were loops for a belt. Foot troops wore breeches and puttees. Headdresses were of three types. The most popular was considered a cap. Actively wore helmets and adriana, whose front was a picture of the emblem. In addition to appearance, this helmet could hardly boast of something else. It does not provide protection from falling bullets. In very cold weather French uniform has expanded its range to sheepskin coat. Such clothing is difficult to name the best for different weather conditions.

the Best form of American soldiers became the prototype of all modern field of clothing. It is distinguished by functionality and sophisticated appearance. It didn’t freeze, and it was one of the decisive factors in the war.