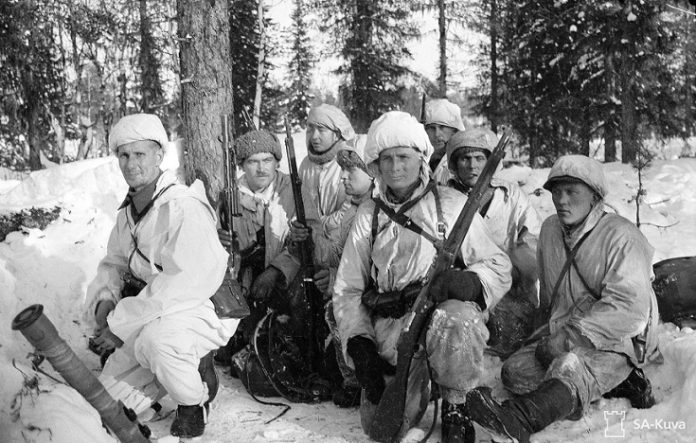 Immediately after the beginning Soviet-Finnish war, a former rebel chieftain kholodnohirsko Yuri Gorozanin-Lisowski, known under the pseudonym “horlis-Gorsky” arrives in Helsinki. Nationalist together with his colleague Alexander Shulgin offers Finnish government form of captured Ukrainians from the red army and the OUN (banned in Russia organization) volunteer unit that would fight against the Bolsheviks.

the Tragedy of the 44th infantry division

At the end of December 1939 from Ukraine to Eastern Karelia in full force translates the 44th Kievskaya of the red banner infantry division of a name of Shchorsa. 17 thousand red army soldiers without winter uniforms, and the street was cold as -40°C, landed on geleznodorognoe Kem station. Hence moravci along with 163rd Tula rifle division was to attack on the Finnish town of Suomussalmi.

the Offensive was appointed on new year’s eve and the fighting 1-7 January in the snowy Karelian forests 44 division surrounded by Finnish troops. During the weeks of confrontation, the division lost 70% of personnel, and in General the battle of Suomussalmi cost the red army of 23 thousand people. The loss of the Finns amounted to 800 men. 1200 enlisted men and officers of the 44th Kievan division was captured and it is from them horlis-Gorsky forms its unit.

the consciousness of the squad

Information on creating the Finns Ukrainian side confirms the message to headquarters, which sent the commander of the 9th army Chuikov. In it, he was told that agents horlis-Gorsky by agitation and propaganda to recruit prisoners of war born in Kyiv and Zhytomyr region. The telegram Chuikov noticed that the reason for the defeat of the 44th army of the shameful cowardice of the brigade commander Vinogradov and Commissioner Pakhomenko and the lack of winter uniforms from the red army.

Finnish General Hjalmar of siilasvuo, which broke the 44th Soviet division, recalled that the red army from Ukraine gladly accepted the idea to join the squad horlis-Gorsky. At the end of January 1940 the Finnish army was a Ukrainian regiment under the command of ataman Yuri horlis-Gorsky. Originally it was listed as 450 fighters, but by March the number of units has doubled. The soldiers were dressed in Finnish uniforms and wearing caps, “mazepintsy” with the Ukrainian symbolics.

the Battle path of the unit

it is Known that the Ukrainian regiment fought in the area of the Karelian isthmus near the villages Kiviniemi and Viitasaari. In the snowy Finnish woods Horlis-Gorsky used the same methods of war, and in the Kholodny Yar. The volunteers avoided a direct clash, and exhausted enemy ambushes, exits to the rear, flank attacks. Ukrainians skillfully used the marshy terrain and complicated landscape of Karelia. There is information about the participation of the regiment in the defense of Vyborg.

the clash with the regiment in his memoirs, wrote the commander of the 7th Soviet army Kirill Meretskov. After his men overcame the main line of the Mannerheim they stumbled upon a new line of defence that the words of the commander of “defending gang hohlyatsky emigrants-defectors”. The commander also said that the Ukrainians did not want to fight for the Soviet Motherland and massively surrendered to the Finns.

This opinion was shared by leader of the OUN* Bogdan Ketrzynski, who lived in Helsinki and was engaged in the registration of volunteers. Nationalist, interviewing the prisoners were Ukrainians, noticed that they massively hate the Bolsheviks because of the arranged in the villages of the famine and collectivization. For the Soviet command the dangerous situation: rumors about the unit horlis-Gorsky, decomposed red army soldiers recruited from the Ukraine. The Ukrainians did not want to fight, especially against fellow countrymen, which reduced the fighting efficiency of Soviet troops operating against Finland.

After the Finnish campaign Yuri horlis-Gorsky made a bet on germania. In 1938 he had a conflict with the Bandera wing of the OUN*. In 1945, Yuri, along with his wife was sent to a camp for displaced persons in the town of Neu-Ulm. Here the words of the canadian historian Sergei Calcica former chieftain and the head of the Finnish volunteers were killed by Bandera and his body cemented into the floor of one of the barracks of the camp.