Home Breaking The Board of Elections expedienta to Pedro Sanchez by using pork-barrel of... 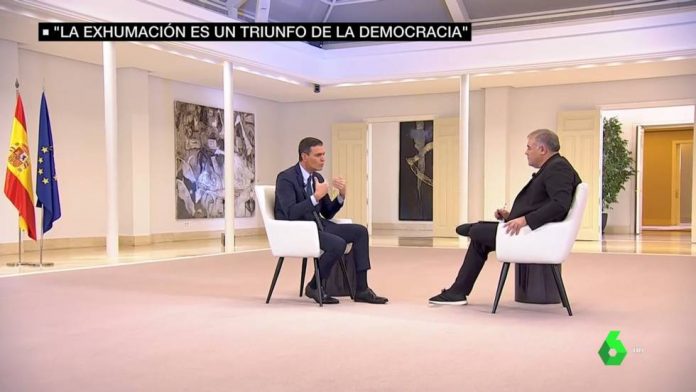 The Central Electoral Board (JEC) has opened proceedings to the acting president, Pedro Sanchez, for use in elections of the halls of The Moncloa for an interview in The Sixth in the that boasted, at various times, of the economic progress of the country. The resolutions also include the minister spokesman of the Government, Isabel Celaá, who last October 2, the national electoral commission as he prepared to do, “electoralismo” in the Council of Ministers, in this case by some of its later operations to the meeting of the Friday following the exhumation of dictator Francisco Franco. The Government has issued a brief statement after the release of the record to Sanchez, which ensures that the national electoral commission “allows” the president to do interviews in The Moncloa, “as did their predecessors,” and adds that the resolution is in question “only the scenery, so that in the future you will care even more for all the details in order to avoid misinterpretation unwanted”.

The JEC will process both records and to its end will decide whether to impose a penalty and of what type, as stipulated in articles 139 and 153 of the Organic law of the Electoral Regime. The 153 says that “any violation of the mandatory rules laid down in this act that does not constitute a crime shall be sanctioned by the electoral board has jurisdiction. The fine will be from 300 to 3,000 euros if it comes from authorities or officials, and from 100 to 1000 if it is performed by individuals”.

The agency, which monitors the proper functioning of the system in election periods has been estimated in part a denunciation of the PP against an interview of the president of the Government on functions, Pedro Sanchez, in the Sixth, on the 25th of October, from one of the official lounge of the palace of the Moncloa. In it, according to the national electoral commission, the president made several demonstrations with “connotation electioneering”, as denounced by the PP.

The national electoral commission sets out a statement of Pedro Sánchez in the adventure that the problem in the elections convened for November 10, is not if you are going to win the PSOE by more or less margin: “We need a parliamentary majority wide that guarantees the necessary stability to be able to draw forth all the problems. And that’s not going to be able to address if what in the end wins is the lock and a fragmentation of parliamentary which has led to precisely the 28th of April to see us doomed to a repeat election”.

Sanchez also stated: “that is why it is very important to move forward, that is why it is very important, especially to the people undecided to be very aware that the next 10 of November we have to give an answer to a question quite simple, and that is if we want Spain to progress or continue mired in the lock”. And he also stressed: “I Insist, we need a strong Government, a stable Government with a parliamentary majority is solid, and that is what I ask to the Spanish.”

The complaint made by the PP also indicates that the transcription of that interview was available on the institutional page of the Presidency of Government on the internet (www.lamoncloa.es), a fact that is considered “crucial” to determining whether it has violated the prohibition of article 50.2 of the Organic Law of the Electoral Regime (Goel).

The Board points out, in this sense, that in the pleadings of the president of the Government recognizes that the transcription of this interview was broadcasted on the mentioned page public of Internet of The Moncloa, but then was withdrawn. For the national electoral commission, “that fact is evidence of the use of a public page official for the dissemination of expressions of content electioneering, which violates the principle of political neutrality that arises from the art. 50.2 of the Goel”.

For all these reasons, the national electoral commission determines that such demonstrations of Sanchez not had the article 153 of the Goel, but the article 50.2 “to be carried out by making use of institutional means and, uniquely, to be broadcast on the official website that the president of the Government has on the internet.” And agree that that transcript and the dissemination of that interview should “remain withdrawn from the official page mentioned above, at least until the end of the electoral process.” Finally, the Board proceeds to initiate proceedings to Pedro Sanchez, especially by understanding that it had already been a warning issued recently to all the members of the Government “to refrain from infringing the principle of neutrality, which the public authorities are obliged to respect during the electoral process.” The JEC has appointed as instructor vocal of this record to Eduardo de Porres Ortiz de Urbina and as secretary Carlos Gutierrez Vicén.

The note issued by The Moncloa after the record states that the Government will submit claims, on the conviction, he adds, “that finally the national electoral commission shall find that the action has been the correct one.

In the case of the open file to the minister, spokesman in functions, Isabel Celaá, the JEC understands that he could use an institutional ceremony, as is the press conference after the Council of Ministers, for breaking the law by issuing “manifestations assessment of achievements in the field of employment, with a clear connotation electioneering”. And points as a first example his comments at the publication of the economically Active Population Survey: “unemployment has been reduced below 14%, namely to 13.9%, one-tenth, but in economy the tenths matter, which means the lowest rate in the last decade and the occupancy reaches almost 20 million people.”

The Board argues that this event, and others like to emphasize that the active population had increased by 25,000 people, and that there had never been many people in the labour market, the made the minister Celaá before giving account of the content of the agreements of the Council of Ministers, “with what in any way it should think that they were the spontaneous result of the questions asked by the journalists, but rather that it is about some manifestations previously developed”.