Home Breaking The capture of Plevna: how the Russian broke the 50-strong army of... 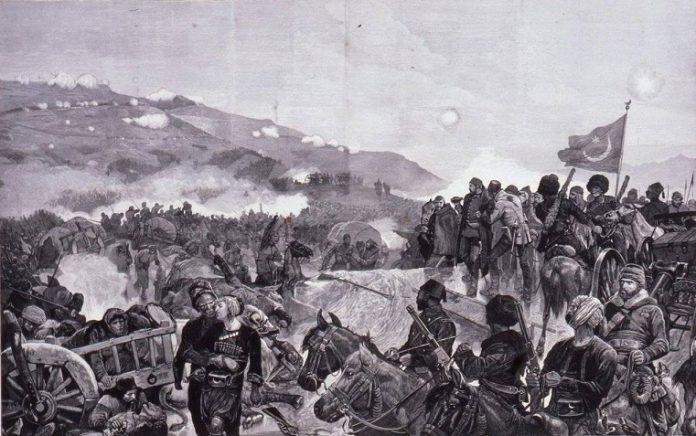 History 26/03/20 the Capture of Plevna: how the Russian broke the 50-strong army of Osman Pasha

10 Dec 1877 during the Russo-Turkish war of 1877-1878, Russian troops after heavy siege captured Plevna and forced to surrender the 50-strong Turkish army. It was important for Russia to win, but it was given a considerable price.

Heavy fighting at Plevna, which cost the Russian army of tens of thousands of dead and wounded, were reflected in painting. The famous painter V. V. Vereschagin, a former member of the siege of Plevna ( one of his brothers was during the Third assault of the fortress killed and another wounded), devoted to this event painting “is Defeated. Requiem “. Much later, after the death of V. V. Vereschagin in 1904, another participant in the events at Plevna scientist V. M. Bekhterev responded to this picture with the following poem:

the whole field covered with thick grass.
Not roses, and the bodies of its carpet
Priest stands with a naked head.
Shaking a censer reads….
And the choir behind him in unison, slowly sings
One after the other prayers.
He is the eternal memory and grief pays
to All the fallen for the Motherland in battle.

Under a hail of bullets

One of the factors contributing to the high losses of the Russian army during three unsuccessful storming of Plevna and other battles for the mastery of the Turkish outposts around the fortress became a high density of fire of the Turkish infantry. Often the Turkish soldiers had a sample of two firearms at the same time — the American rifle Peabody-Martini for long-range shooting, and semi-automatic carbines a Winchester for close combat, allowing for short distances to create a high density of fire. Of the famous battle paintings, where the Turks are depicted at the same time with rifles and carbines is a picture of A. N. Popov “Protecting “the eyrie” orlovtsami and brancati 12 Aug 1877″ (the events in SHIPKAm pass) — the same was the appearance of the Turkish soldiers at Plevna and.

In the 16th division of the

With the name of Mikhail Dmitrievich Skobelev linked to a series of striking episodes of the Russo-Turkish war. Noteworthy is the preparation of the 16th division Skobelev to the crossing of the Balkans after the capture of Plevna. First, Skobelev rearmed his division rifles “Peabody-Martini”, which was taken in huge numbers in the arsenals of Plevna. Most Russian infantry units in the Balkans were armed with a rifle Krynka, and more modern rifles Berdan was only the Guard and the Grenadier corps. Unfortunately, this example was not followed Skobelev and other Russian commanders. Second, Skobelev, using the stores (warehouses) of Plevna, provided their soldiers with warm clothing, and when they move to the Balkans and even wood — so moving on to one of the most difficult parts of the Balkans — Metliska pass the 16th division did not lose a single man frostbitten.

the Supply of troops

the Russian-Turkish war and the siege of Plevna was marked by enormous difficulties of military supplies, which under very dark circumstances, was entrusted to the “Association Greger-gerwitz-Kogan”. The siege of Plevna was fought in extremely difficult conditions which began autumn slush. Increased disease and there was a threat of famine. Daily was out of action for up to 200 people. During the war the number of Russian army at Plevna is constantly increasing, and the demand increased. Therefore, in September 1877 the formation of two civilian transport among 23 offices 350 two-horse carts each, and in November 1877 two further transport of 28 branches of the same composition. By the end of the siege of Plevna in November, transportation was attended by 26 thousand 850 civilian wagons and a large number of other vehicles. Fighting the autumn of 1877 marked the first appearance of field kitchens in the Russian army much earlier than other European countries.

After the Third unsuccessful assault of Plevna 30-31 August 1877 for handsthe contents of this manual the siege-works were caused by a well-known engineer, the hero of defense of Sevastopol E. I. Totleben. He was able to establish a tight blockade of the fortress, to destroy with the reset flow of water from open dams Turkish water mills in Pleven, denying the enemy the opportunity to bake bread. An outstanding fortification has done a lot to improve the everyday life of troops besieging Pleven, preparing Russian camp to rainy fall and the impending cold weather. Abandoning frontal attacks of Plevna, Totleben organized permanent military demonstration in front of the fortress, forcing the Turks to keep the first line of defense and substantial forces to bear heavy losses from the concentrated fire of the Russian artillery. Totleben himself said: “the Enemy holds only defensive, and I will bring against him a continuous demonstration that he assumed on our part an intention to storm it. When the Turks is filled with men redoubts and trenches, and their reserves are approaching, I ordered to fire volleys of a hundred or more guns. Thus try to avoid casualties on our side, causing the daily loss of the Turks”.

After the capture of Plevna to Russia once again the looming threat of war with England, painfully perceiving any Russian gains in the Balkans and the Caucasus. In July 1877, the English fleet was introduced in the Dardanelles. And after the fall of Plevna, the Prime Minister of England, Disraeli even dared to declare war on Russia, but the support in the Cabinet is not received . 1 Dec 1877, Russia submitted a Memorandum with the threat of declaring war in case of an occupation by Russian troops of Istanbul. In addition, was launched an active organization of collective international mediation (intervention) for the conclusion of peace. However, at the time Russia rejected such a development, indicating agreement to direct Russian-Turkish negotiations.

the Siege and capture of the Russian troops has become one of the key events of the war of 1877-78, After the fall of the fortress of RussKim troops, the way was opened through the Balkans, and the Ottoman Empire lost for an 50-thousand army. Further rapid action of the Russian forces allowed for a rapid transition through the Balkan mountains and to be signed for the lucrative Russian San Stefano peace. Nevertheless, the siege of Plevna became the national military history as one of the most bloody and severe. During the siege the loss of Russian troops were over 40 thousand people killed and wounded.