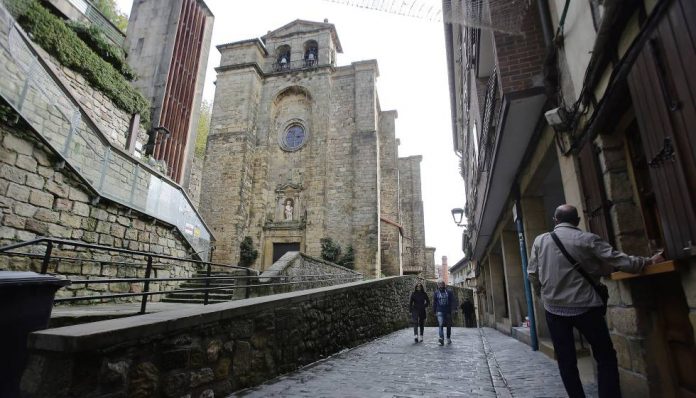 there Was a time in which to know the social stratification of a town was enough with a mass. There, on the side of the church, reposed in the chapels of the deceased of the clans powerful. Under the slabs of the floor, the more rich the more close to the altar, they had the rest of the families. And the poor, without the means to purchase a grave, they lay in the courtyard annex. “All were buried in the grounds of church and the money was the way to have close to of the saints the souls of the loved ones”, sums up Mercedes Granjel, professor of History of Medicine at the University of Salamanca.

known as The plague of Passages, a virulent epidemic that ended in a few months in 1781 with more than 10% of the population of the strategic port of Gipuzkoa, marked the beginning of the end of a tradition just as unhealthy as deep-rooted in the Iberian peninsula. And gave rise to the creation of the modern civil cemeteries outside the walls. The importance of this episode was included in 1787 in the Royal Cedula by which king Carlos III banned in Spain the burials in the churches, on the occasion of the epidemic experienced in the Village of Passage […] caused by the stench intolerable that he felt in the Parish Church of the multitude of corpses buried in it.”

Despite its historical significance, little more was known until the date of the episode. “Now we know that it affected more women than men, and poor to the rich. We have until the surname of the deceased,” explains Adrian Hugo Aginagalde Llorente, researcher at the Basque Museum of the History of Medicine of the University of the Basque Country (UPV-EHU). He is the principal author of a research —presented at the congress of the Spanish Society of Epidemiology held in Oviedo (spain)— based on the leaves and parochial documents found in the archivo General de Gipuzkoa, that allows you to shred the historic event. “The data reveal a crisis of subsistence typical of the EIGHTEENTH century, with peaks of mortality in the several towns of Gipuzkoa, on the onset of the great plague of Regions”, he adds.

The coefficient of mortality —in which 100 indicates the deaths to be expected, and the values of 80 to 120 the fluctuations usual— began to rebound in the last quarter of 1780 and fired on the new year, when it remained during the first nine months, above 500 (five times more). “Died, 83 people a census of 775,” says Aginagalde, which qualifies the plague of “great crisis” demographic.

The pathogen causative, however, has not been able to be determined. “We rule out yellow fever because the mosquito that transmits it does not survive the cold. Also the anger, because their buds differ a little by social class and will not be extended during the winter,” explains Aginagalde. “It is possible that it was the typhus, jail fever epidemic or typhoid. To be a port, nor can we rule out the bubonic plague, but the record of the Health Board and local is very limited to describe the symptomatology of those affected”, adds the researcher.

“The plague of Passages was the trigger that led the State to move to banish this habit,” explains Granjel. “Some authors had warned about the need to create cemeteries outside the walls. But it was not until the epidemic the government of Carlos III, in its pursuit of modernization, became aware of the need to do,” he adds.

The cemetery of the Royal Site of San Ildefonso, driven by the monarch in 1783 in the sierra of Madrid, and in barcelona’s Poblenou in Barcelona, opened eight years earlier by the enlightened bishop Josep Climent, were the first examples of a new current that advocated cemeteries sections of the population in well-ventilated areas. “The new measures put the focus on the pollution of the air, the vapors created by the decomposition of the body, as cause of disease,” says Esteban Rodríguez Ocaña, professor of History of Science of the University of Granada. “The goal happens to be to maintain a clean atmosphere in a time in which the monarchy is aware of the economic value of the population as an asset whose health should be protected”, adds Rodríguez Ocaña.

The Royal decree of Charles III was not able to end up with a tradition that in some places of Spain lasted until well into the NINETEENTH century. The delay, according to Granjel, has two explanations: “With the death of Carlos III loses strength the impulse of modernization of the State. And the Church is opposed to almost block the measure because with the new cemeteries under the civil power, loses an important source of income from the sale of graves”.

Even today, as a stronghold of another time, a hundred families still preserved in Spain the right to bury their deceased in the cathedrals, convents or churches which are spread throughout Spain. In their majority, are the lineages of the nobility, who were able to maintain their privileges, although the list also includes surnames in the world of finance and industry who have made a hole in sacred space to hit book.