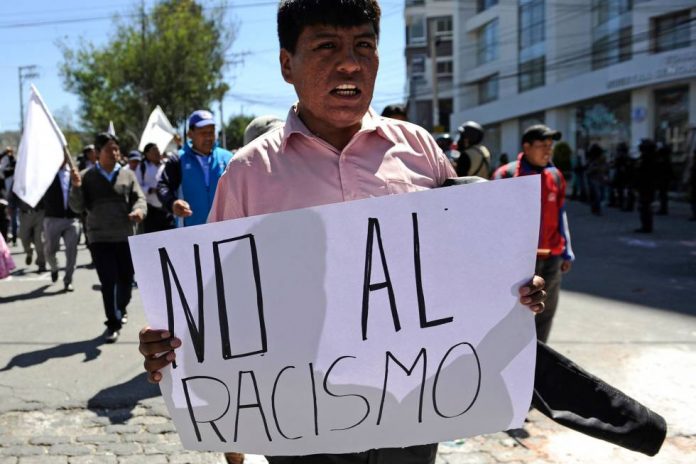 Yolanda Mamani, an activist and journalist, went to a rally in La Paz, convened in response to allegations of fraud against the Movement To Socialism (MAS) —the Government party— in the elections of October 20. This woman, who is identified as chola (female, mestizo, indigenous), says that many of the slogans that you heard that night, the 23rd of October, the indignant tone of racist and homophobic: “he who does not jump is a chola mas” or “indian shit”, could be heard.

In recent days, social networks, and concentrations have served as a battleground for that supporters of the ruling party and the opposition are insulted with all sorts of expletives making allusion to his origin, social class or ethnic group to which they belong. Have been recorded, in addition, attempts of destruction of national symbols like the whipala, flag that represents some of the ethnic groups of the Andes.

Yuri Torrez, doctor of Cultural Studies in Latin america by Simón Bolívar Andean University of Ecuador, explains that the racism in Bolivia is structural. Coming from cologne, has set up a society not only socially inequitable, but, above all, racially discriminatory. “In this context, the privileges of access to spaces favored, among which were, logically, the spaces of power, was only for the sectors creoles-mestizos of the bolivian society with an exclusion evident in the indigenous sectors of the country,” added Torrez.

The Republic of Bolivia was called a Plurinational State, the 22 of January of 2009 to recognize and remember as well the cultural diversity and the importance of indigenous and farmers in the country’s history. Torrez explained that this change in the Constitution was intended to remove that exclusion and segregation structural.

however, since the formation of a Constituent Assembly in 2006 to draft a new Constitution has remained in Bolivia, a social polarization. This, added to the indigenous presence in the power, personified in the figure of the president, Evo Morales, has brought back “the spectra segregationist”. However, only changes have occurred “in a formal way, with the promulgation of the Law Against Racism and other forms of discrimination, but, paradoxically, in the imaginary of the sectors creoles and mestizos there is a sense of racism schizophrenic against the indians. Perhaps it is for this reason that the president is hurt in the face of these racist attitudes and, in his speeches, especially in times of social conflict, alludes permanently to this racial harassment and are victimised as part of its strategy of discursive and, therefore, political,” says Torrez.

Morales, in a tweet published on October 23, defended himself against allegations of fraud, arguing that the opposition does not want to recognize the vote of the indigenous people and that their only crime is “being a president indian”. The president, in more than one speech, has warned his supporters about the intentions of the right of return to a neo-liberal model, and leave aside the symbols and the conquests of the Plurinational State. Andrea Barrientos, senator elected by Community Citizens —training that leads the opposition, argues that the president’s statements of “return to the past” demonstrate that the Government party, Movimiento al Socialismo (MAS), wants to build a political enemy to create a scenario of polarization.

“The enemy of the MORE have been the entrepreneurs, the neo-liberal model, to the right,… but has also tried to incorporate a sector of the middle and upper middle class of the population. However, you would have sought the unity between the bolivian and bolivian. For us the Constitution is marking the symbols necessary and important in the country and we’re not going to change or we’re going to go back in processes of social inclusion,” adds Barrientos.

To Sergio de la Zerda, a deputy elected by the MAS, the call to mobilize Carlos Mesa, the main opposition leader, for alleged fraud has revived extreme positions that were thought to be surpassed in the country. “I have seen how these assaulted verbally and physically to people of neighbourhoods away that they identify with the MOST and indigenous peoples, without even distinguishing between women, children or the elderly. These groups have come to intimidate us, to the elected candidates, burning and looting our homes campaign and, worse, taking pictures of our homes and to our children. These are actions clearly fascist,” says the deputy.

Alejandra Ramírez, a sociologist and a phd in development studies, believes that racism is only an edge within the “conflict interciudadano”. “That is what is exacerbating these days. Say: ‘are So racist in this population’. With that, the enemy is visible: the State, as in Chile and Ecuador, it disappears and moves the conflict to the civil society, making the enemy be the one who is by your side”, he explains.

The sociologist emphasizes that the president is directed to his followers as if there were two different countries, one rural and one city. Cites the example of last Sunday, in the town of Sicaya, in Cochabamba, where Morales summoned the peasant movements to “encircle” the cities, to see if “hold up” without food. This type of reactions, according to the specialist, it also causes racism in people from the countryside to the people of the city. As well as the inhabitant of a city can be called “indio” or “cholo” for the farmer, as he explains, a farmer may tell the one who lives in a city jailón (wealthy, with negative connotation), bottom white or khara (a derogatory way to call someone white in quechua).

“to Say that racism is only on one side I think that is really maniqueísta, because all companies look the other way descalificadora and that you are seeing in the conflict. On Monday at a press conference, Garcia Linera [vice president of Bolivia] gives an idea that here there are both good and bad, when it is not, have managed to face between bolivians,” concludes Ramírez.