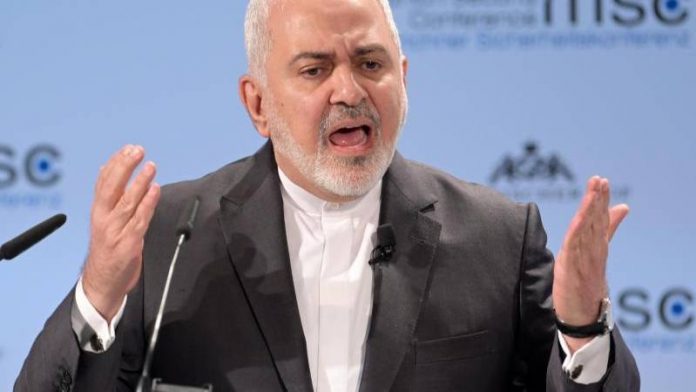 With the sanctions against the Iranian foreign Minister Mohammed Javad Zarif has exacerbated the U.S. government, the tensions between the two countries.

Sarif to set the “reckless” Agenda of Iran’s Supreme leader Ayatollah Ali Khamenei and was the “main spokesman for the regime in the world,” said US Treasury Secretary Steven Mnuchin. By the measures available assets are to be frozen Sarifs in the USA, also US citizens are allowed to make henceforth not do business with him.

Trumps national security adviser, John Bolton, spoke of a momentous decision. Iran was a “state supporter of terrorism” and something like the Central Bank for terrorists, he said on Wednesday evening (local time) in Washington. From government circles in Washington, it was said that the US would continue with its strategy of maximum pressure against Iran until the country change its course.

Trumps government accuses Iran pursuit of nuclear weapons and to support, in several countries of the Middle East terrorist organizations. Although Trump has declared several times that he was, as in the case of North Korea willing to negotiate with the Iranians. The settlement of the differences between the two countries is likely to be become by the sanction of no more than moderate force chief diplomats Sarif again, though, more and more difficult.

The Iranian responded foreign Minister promptly to the sanctions and described them on Twitter as ineffective. He and his family had no possessions outside of Iran. “Thank you, that you perceive me as such a big threat to their Agenda,” he added sarcastically. The justification for the U.S. government for the sanctions was that he was the main speaker of Iran on the world stage. “Is the truth really that painful?”, he asked on Twitter.

In June were imposed by the USA sanctions against Iran’s Supreme leader, Khamenei, and several high-ranking members of the revolutionary guards. Even then, the government announced that it plans to also want to Sarif on the sanction list.

From government circles in Washington was reported that Zarif could continue to travel to the seat of the United Nations in New York. The United States would keep its commitments under the relevant UN agreements.

Despite the recent Affronts to the US, which will allow the government, the international cooperation on civilian nuclear projects in Iran for the time being in limits. A corresponding exemption was extended, according to Bolton again to 90 days, most recently in may. It is a question of projects on the Iranian nuclear facilities Arak, Fordow and Bandar-e būshehr. Thus, Russia and European countries can cooperate further with Iran, with the goal of the non-military character of the site activities to ensure. The activities would be on a daily basis and “very, very carefully” monitored, said Bolton news channel Fox Business.

The United States dropped out in may 2018 on one side of the nuclear deal. With tough sanctions against the Iranian Oil and banking sector, you want to force the leadership in Tehran, since then, to a new nuclear deal with harder conditions to agree to. The Oil sector is the main source of income of the country. The nuclear agreement is intended to prevent the Islamic Republic from developing nuclear weapons.

Zarif is considered one of the architects of the agreement. The Tehran-born Diplomat who studied in San Francisco, holds a PhD in political science from the University of Denver and speaks perfect English. He was also from 2002 to 2007, Ambassador to the United Nations in New York, where he already had several unofficial Meetings with U.S. politicians.

In the course of the negotiations for the agreement, developed Sarif and his then US counterpart, John Kerry, a well-functioning working relationship, what was in the face of decades-long hostility between the two countries is remarkable. The Democrat Kerry called Zarif a “patriot”. Trumps government has, however, not a good word for the 59-Year-old left. Minister Mike Pompeo Zarif and Iranian President Hassan Rouhani referred to the outside in February on Twitter as “front men of a corrupt religious Mafia”.

Reuters topics in this article, Zarif Iran sanctions Washington-Mohammad Javad Zarif USA John Bolton Twitter Ali Khamenei Tehran to UN, Donald Trump, New York Steven Mnuchin terrorism, North Korea’s New policy on Violent attacks TV debate of the US Democrats: The favorite is Joe had Biden quite different DPA introduced to display a star journey of the worlds Sicily in the spring with flight and half Board from € 899,- #Lost trump history Donald Trump wants to distinguish themselves with “9/11″statements – but Twitter will respond with photo montages and mocking of the US Mission in the Gulf, foreign Minister Maas United States rejected the DPA Nazi pictures sent To Whatsapp messages: Daimler-Chef takes a stand against right-wing agitation DPA länder risk-of-Poverty: as different As the odds of Bavaria to Bremen state Parliament election of Thuringia election: Left in the survey for the first time, the strongest power – before the AfD and CDU protests in Hong Kong With this simple Trick to defuse protesters tear gas grenades government loyal channel Donald Trump fears, allegedly, that “Fox News” is no longer behind him, From Niels Kruse ARD report, “Squandering of national assets”: the accusations against Seehofer and Söder due to land asylum-seekers purchase A year anchor centers: CSU celebrates success, opponents are calling for the abolition DPA 40 new Levels of Mahjong – free to play! Burkhard Jung play “To the gallows with you” – Leipzig, WHETHER published threats to pig meat debate between the balance sheet 2019 is a Federal Prosecutor, identified five times more likely to be against Islamists as against extreme Right-wing, DPA, Asap Rocky American Rapper in Sweden, incarcerated: U.S. sent experts for hostage-taking, DPA, coercion, and Usurpation court sentenced AfD-the city Council on the motorway as a police officer speech in Jamestown listener output interrupts Trump: “Mr. President, you can not send back” Strait of Hormuz USA ask for military aid – why Germany (again) reject dpa’s speech in Jamestown member of Parliament is to protest Trump’s speech and from the hall of the AFP brought the analysis to Racist attacks Donald Trump in the campaign mode, strips off the last restraints of decency from Niels Kruse +++ Trump-Ticker +++ Pastor Al Sharpton, Donald Trump: “I am the least racist Person in the whole world,” AFP ceremony in the White house, Trump welcomes first responders to the 11 September 2001, and commends itself By Marc Drewello