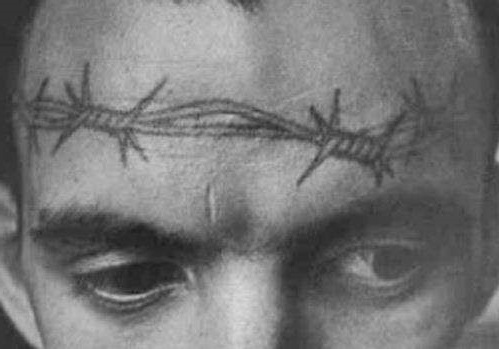 In the Soviet Union prison tattoo could tell a lot about its owner. Therefore, the application of the tattoos prisoners were treated very seriously. Important was the picture itself, and its location on the body of the owner.

depending on the main function they perform, tattoos made in prison can be classified into 7 groups:

Information and hierarchical. They inform the inmates what position in the prison hierarchy is their owner and how you want to handle it, what rights and responsibilities he has.

Setup-personal. They testify to certain facts of the biography of the prisoner, about his relationship to structures of power, the different events, in some cases, on the nature.

Thieves. Show you where and what to sentence the prisoner, whether he studied in a special school.

Professional. It is possible to learn the profession and professional skills serving sentences.

the Aide. With their help, on the body perpetuates the significant events in the fate and life.

the Prison hierarchy of the Soviet Union as any more or less well-established community, had its lower and higher layers. The first was strongly despised and ignored, the second enjoyed the respect and esteem of the inmates. The position of the “bottom” at times it was unbearable, and the prisoners tried hard to conceal their belonging to lower strata. The tattoo was a token that is not allowed to keep the information confidential. For greater clarity and visibility they are applied in plain sight — the face of a man, often under duress, forcibly. Such a tattoo full of the enforcedthe best way was called “hussy”.

In some cases the prisoners themselves who wanted to get a tattoo on your face. Especially those who are proud of belonging to the “top” of the prison hierarchy, sought there. For example, at one time was very popular tattooed on the eyelids “do Not Wake”. She identified its owner as capable of anything, aggressive personality, and warned the inmates to disturb this person.

tattoos on the eyelid was considered the most technically difficult process, as there was a high risk of eye damage. To avoid this, under eyelids laid the spoon.