Home Breaking What Hitler’s soldiers defected to the red Army 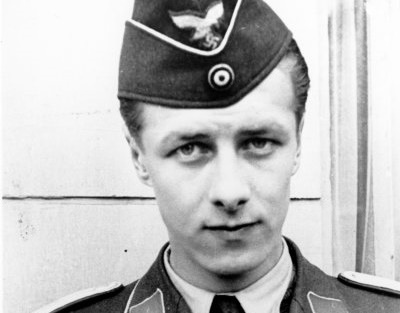 the Names of many Soviet traitors have taken the side of the enemy, has long been known: Lieutenant General Andrei Vlasov, hero of the Soviet Union fighter pilot Semyon Bychkov and others. Less well known is that during the Second world war, many soldiers of the German army went over to the red Army.

June 21, 1941, Alfred Liskov, a soldier of the 222 regiment of the 75th infantry division of the German army, learned about the imminent speech to attack the Soviet Union. A former employee of a furniture factory no illusions ideas of Nazism, and take a sober look at things. The evening of June 21 a 30-year Liskov left his unit, which was stationed on the borders of the USSR to the North of Lemberg (now Lviv), crossed the bug river and surrendered to Soviet soldiers who patrol the 90th border guard service, told about the planned invasion.

At night interrogation Liskov confirmed that the next morning the Nazi troops attacked the Soviet Union. The next morning began the Great Patriotic war. Information Liskova was confirmed, and the Soviet government decided to use the defector as a agitator. Until the end of the summer, he has been actively involved in advocacy activities. Subsequently Liskov came into conflict with the leadership of the Comintern, Georgi Dimitrov received from the accusation of anti-Semitism and fascism.

In January 1942 Liskova arrested and sent to a prison camp, where he successfully feigned madness. According to the Book of memory Bashkotorstan, July 16, 1942, the first defector of the Wehrmacht in the Union rehabilitated. However, at the end of the same year Liskova sent to Novosibirsk, where his traces are lost permanently. A former soldier in the Nazi army there was virtually no chance to survive in a country where even innocent Soviet Germans deported nationality in Northern Kazakhstan or were driven to the mine in the Army.

on 25 June 1941 near Kiev landed German bomber “Junkers-88”. His crew consisting of four people decided to move to the side of the red Army. The Soviet information Bureau reported on 28 June 1941, that the pilots were in the second group of the 54th squadron. The crew was a native of Breslau (Middle Silesia) non-commissioned officer Hans Hermann, pilot-observers of the Frankfurt-namine Hans Kratz, born in Brno (Moravia) senior corporal Adolf Appel and radio operator from Regensburg Wilhelm Schmidt.

the Pilots did not want to fight against the people of the Soviet Union. Being sent on a mission, they dropped all the bombs in the sky, and then landed not far from Kiev met with and surrendered to the peasants. The crew as a whole signed the appeal “To the German pilots and soldiers”, in which he urged: “the Brothers pilots and soldiers, follow our example. Throw the killer of Hitler, go to Russia!”

In the same month, in the area of deployment of Soviet troops flew the second Junkers”, but from the entire crew to the German troops agreed to apply only mechanic. Others feared persecution of their families in Germany. Just before the end of summer to the red Army moved no less than 20 German pilots.

the Infantry did not depart from the pilots

the Newspaper “Red Star” wrote in June 1942: “squad leader of the 2nd company of the 48th regiment of the 12th infantry division Ianni of Shenfeld long gradually figured out how his soldiers are looking at the possibility of transition to the red army. Exhausting fighting and serious losses weakened people, it turned out that 7 people have a dream to finish the fight and ready to go to Russian”.

In late may 1942, in the midst of battle for a small village of PFC Shenfeld ordered his soldiers to lay down their arms and follow him. They all rushed to the forest, located a few dozen meters from the trenches. A German officer, seeing the desertion, fell to the machine gun and opened fire on fleeing. Four were killed, but three survived and surrendered.

Fritz Paul Senkel desperately did not want to fight for the Nazis. In 1932 his father, a Communist killed by the Nazis during the demonstration. Later Fritz joined the Communist youth international in Germany. In 1938, he tried to call for military service. Menkel feigned illness and evaded service, for which he was convicted and held until 1941 in the prison of Torgau.

With the outbreak of war in the Soviet Union, Menkel requested direction to the front. In October 1941, the year he was released, sent to school Junior commanders of artillery. Once in front, Menkel almost immediately fled, and from November 1941, was hiding in the Smolensk region in the villages. In February 1942, he came to the partisans and convince them that he was against Nazism.

In the first battle of Shenkel killed Nazi sniper who shot from ambush by guerrillas. The detachment recognized the bravery and honesty of Fritz and loved it, called Ivan Ivanovich. Mencel fought valiantly against the Nazis. So, he advised the commander to open fire on the barrels mounted on the tanks with fuel. It helped to destroy 5 German tanks. It is also without a fight, was captured and handed over to the partisans 11 police officers.

At the beginning of November 1942 Shenkel got a General’s uniform, got changed and went to the forest the German convoy, stopped them on the road. It’s a long time provided the guerrillas with food and ammunition. The Nazis quickly got wind of the valiant German by appointing the head of Smokele a great reward.

in the Spring of 1943, the partisans were transported to Moscow, because the territory, where he fought the squad, was liberated by the red AMI. Smangele seconded to the intelligence section of the Western front, where after training was appointed Deputy commander of DRG “Field”. In December, he together with the scouts Vinogradov and Carob were transported to the front line in the district of Orsha. Unfortunately, in early 1944, Fritz Schmenkel was captured by the Nazis in Minsk and 22 February shot.

About the feat of Menkes becameOh known only in 1961, when KGB found the paper about the policemen destroyed them at the head of the guerrilla group. Three years was a search of identity. In October 1964 the title of hero of the Soviet Union was awarded citizen Spencely Fritz Paul (posthumously).

the great-Grandson of the Iron Chancellor

Count Heinrich von Einsiedel mother was the great-grandson of Otto von Bismarck. 18-year-old boys volunteer he came to serve in aviation. By the beginning of the Second world war, the nobleman von Einsiedel became a fighter pilot for the Me-109 in the squadron “von Richthofen”. The brave Count (a nickname given him by the soldiers) participated in the failure of the British torpedo attack on the German ships, shot down several British aircraft.

In June 1942, the skilled pilot Lieutenant von Asides transferred to the hot seat of war on the Eastern front. One month of the battle of Stalingrad, Earl was shot down by a squadron “Udet” 31 Soviet aircraft. 20 Aug 1942 “Messerschmitt” von Asides was shot down under the Beketovka, and he was captured and sent to a camp near Krasnogorsk. There were concentrated captured by the Germans opposed Hitler and his ideology. In November 1943, von Einsiedel joined the anti-fascist organization “Free Germany”. In captivity, he made an open letter in which he quoted the words of grandfather: “Never go to war with Russia”. Von Einsiedel controlled release of anti-fascist leaflets, becoming Commissar of propaganda.

In 1947, von Einsiedel allowed to return to East Germany, where he later moved to the West. Earl worked as a journalist, writer, translator, and wrote memoirs “the Diary of a captured German pilot: fighting on the enemy’s side. 1942-1948”. Von Einsiedel lived a long life. The Earl died in Munich in 2007 at the age of 85 years.

Lieutenant-General, knight Knight’s of the Iron cross Walther von Seydlitz of Kurzbach was captured in January 1943. He considered Hitler an “upstart” and treated him without respect. In the pow camp, he decided to cooperate with the Soviet government, to overthrow the Fuhrer. In the fall of 1943 von Seydlitz of Kurzbach was chosen Chairman of the Union of German officers at the founding conference in Lunevo. With him the Union was composed of the generals of Alexander von Daniels, Martin Lattman, Otto Cortese.

Background Seydlitz-Kurzbach often called the “German Vlasov”. He was appointed Deputy Chairman of the National Committee “Free Germany”. The General was sentenced to death in absentia by a military court of Dresden. After the war, and the dissolution of the “Free Germany” von Seydlitz of Kurzbach served 5 years in the Military-historical Department of the General staff of the USSR. In 1950 he was arrested and sentenced to death in the Soviet Union. Later the sentence was commuted to 25 years imprisonment, five of which are General held in Butyrka prison.

In 1955, the background Seydlitz-Qurbah released and transferred to Germany at the personal request of Adenauer. He lived a recluse to 87 years and died in 1976 in Bremen. 20 years after the death of the General Prosecutor’s office exonerated of General posthumously.

Accurate statistics about the German soldiers who defected to the red Army, is missing. It is known that the score made a conscious choice went into the hundreds. In the last months of the war, when Germany’s position was hopeless, the Germans surrendered in tens of thousands.

the fighting defectors made rare. Usually former soldiers of the Wehrmacht worked in the propaganda of the anti-fascist Committee “Free Germany” in Moscow and were sent to the labor Army in the rear. Those who were able after the war to avoid Stalin’s camps, was granted permission to return to the GDR.