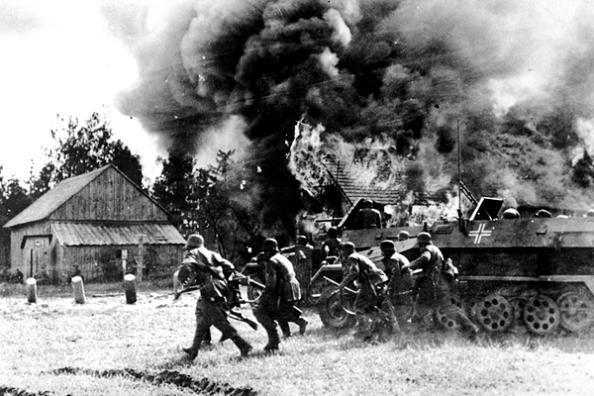 In 5 hours and 15 minutes in the morning 22 June 1941 the people’s Commissar of foreign Affairs of the USSR Vyacheslav Molotov received German Ambassador count Friedrich Werner von der Schulenburg, handed over a Memorandum about the Declaration of war by Germany. The Memorandum contained numerous claims to the Soviet Union, which Berlin officially motivated by the outbreak of hostilities.

“Subversion” of the USSR in Germany and Europe

the Nazi leadership, above all, accused the Soviet Union that, contrary to the agreements with Germany and the public statements of his government, he conducted subversive activities in Germany and the occupied countries through the Comintern. This work was Communist and anti-German propaganda, espionage work, acts of sabotage and Subversion. Under the statement of the German side, from the Union secretly sent to the German Communists, who received special training. The result founded by Soviet agents of the bombs allegedly killed 16 German ships.

in addition, agents of the Country of Soviets launched a propaganda in pan-Slavic spirit among occupied by Germany and her allied Slavic countries. Their population is supposedly being processed, with the help of illegal propaganda and leaflets dropped from Soviet planes in the direction of the establishment of Soviet protectorate over the Slavic countries from Poland to Bulgaria. In Slovakia, Finland and Romania, was conducted the agitation in favor of joining the Soviet Union.

the Soviet Union, the leaders of the Third Reich, have provided systematic support to the enemies of Germany in Europe. So, agents of the Union took part in organizing and conducting the coup of the far-right organization “Iron guard” in Romania in January 1941, aimed at overthrowing the Pro-German dictator ion Antonescu and the rupture of the Alliance with Germany. With the help of the USSR was organized the coup in Yugoslavia in late March 1941, when the government Cvetkovic, made an Alliance with the countries of “axis”, was overthrown and replaced by a government of General Simovic, who spoke against Germany.

Berlin has accused Moscow of double foreign policy. Masking their true intentions with statements about friendship with Germany, the Soviet Union was actively involved in the secret combinations of the UK against Germany. So, in the summer of 1940, after the defeat of France, to Moscow there has arrived the new British Ambassador Cripps, with which the Soviet government established friendly contact and led the secret negotiations for a military Alliance. Since the summer of 1940, the Soviets provided military assistance to Yugoslavia, hoping to encourage her, in Alliance with England to attack Germany. Even then, Molotov, taking Yugoslav Ambassador, allegedly told him that the Soviet Union considers Germany as the future enemy.

According to statements of the German side, it has emphasized the peacefulness in relation to the USSR. To put an end to any confusion, in November 1940 Molotov was invited to Berlin. There the people’s Commissar advanced to Germany unacceptable demands, while meeting Stalin agreed to join “the axis”. Moscow wanted to Berlin and Rome pushed Sofia and Ankara in order to force them to go on an important assignment. The Soviets wanted conclusion with Bulgaria of the agreement on mutual assistance, providing military bases on Bulgarian territory are similar to the contracts that were with the Baltic States on the eve of their accession to the Union. In Turkey, Stalin wanted a military base in the Dardanelles and the free passage of its warships between the Black and Mediterranean seas. Moscow also demanded the inclusion of Finland in its sphere of influence and the refusal of Germany from all positions there.

After that Moscow protested the entry of German troops in Bulgaria, made at the request of the Bulgarian government, and signed a mutual assistance Pact with the anti-German government of Yugoslavia, who came to power as a result of PErewrote. In addition, in agreement with Britain, the Soviet Union encouraged Turkey to war against Germany. All of these red steps, has been repeatedly emphasized in the German Memorandum, clearly violated the nonaggression Pact and the Treaty on friendship and the border with Germany.

the Military preparations of the USSR

Contrary to the treaties of 1939 with Germany, not providing for the direct annexation of countries in the field of influence and prohibiting the planting there of communism and national socialism, the USSR annexed the territory of former Poland, the Baltic States, annexed from Romania Bessarabia and Northern Bukovina. Moreover, the latter do not come into the sphere of influence of the Soviets.

the Soviet Union was preparing a military operation against Germany and her allied countries, claimed the Nazi foreign Ministry. Talked about this constantly increasing group of the Soviet troops on the Western borders. The documents allegedly found by the Germans in the former foreign Minister of Yugoslavia, testified to the fact that the Red army was prepared no later than August of 1941 to take military action against Germany.

That could be a fact

Churchill did not hide in his memoirs that the new Ambassador Cripps was assigned to Moscow to persuade the Soviet Union to an Alliance with England against Germany. American journalist Eric Estorick in his book published in new York in 1942, according to the Secretary Kripps Wilson argued that the decision on the Alliance of the USSR and Yugoslavia in 1941 was made with the direct lobbying of Crapcom. And England went to deliberate misinformation of both countries by convincing their leaders that if she managed to achieve the consent of Turkey to enter the war with Germany in case of the conclusion of such a Union.

the strengthening of the Soviet groupings (as, however, and German) along the common border really were made. Northern Bukovina was not specifically stated as part of the Soviet zone of influence in Eastern Europe. Germany, unlike the USSR, did not Annex the territories directly, but has created all sorts of “protectorates” and “General government”. Molotov, apparently, do the exhLEL Germany these demands at the talks in Berlin.

Everything was only a pretext

the List of violations by the Soviet Union pre-war agreements with Germany so impressive that the question immediately arises: why at least one of these violations was not the subject of the German note of protest before June 22, 1941? It is evident that, even if some of these hostile acts had taken place, that Germany itself showed a peaceful face and masked their true intentions until the moment when moved in their pre-mobilized and concentrated the troops.