Home Breaking “The black army”: as of the MGB struggled with the Moldovan Bandera 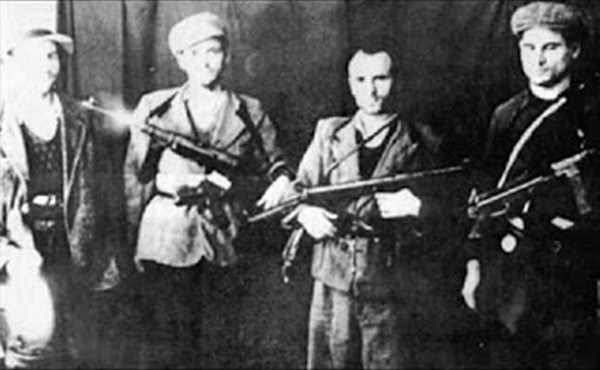 History 01/03/20 “Black army”: as of the MGB struggled with the Moldovan Bandera

In contrast to the postwar anti-Soviet underground struggle in Western Ukraine and the Baltic States, a similar phenomenon in Moldova was virtually unnoticed by a wide range of researchers. Despite the fact that anti-Soviet movement in Bessarabia was not extensive, it caused a lot of headache to the local authorities. The struggle with the Soviet Union led the organization of the “Black army”.

After the October revolution in Russia in Bessarabia emerged Moldavian democratic Republic, which immediately came under strong influence of Romania. Soon the newly minted state and did part of the neighboring country.

In June 1940, Moscow demanded from Bucharest to end the occupation of Bessarabia and transmit it to the Soviet Union. The year before between Moscow and Berlin was signed the Molotov-Ribbentrop Pact, where both countries have recognized the “interest” of the USSR in the return of Moldova. Romania, did not find support in Germany, was forced to submit to the demands of Moscow, and in August of 1940 in the USSR there is a new Federal Republic – Moldavian.

But intense collectivization, broken ties with Romania and the persecution of dissenters has caused some unrest among Moldovans, especially of the peasantry. The situation was further aggravated by post-war famine, which were created in 1945-46 killed about 15 thousand people.

In these years in Moldova appeared about 30 anti-Soviet organizations. Only the law enforcement and intelligence agencies had more than two thousand “anti-Soviet elements”. Among them, the prosperous peasants, supporters of Romania and spies of foreign intelligence services. It was difficult and criminogenic situation in the Republic, there were 20 bandit gangs, many of them were criminals-singles.

Some of these elements later joined the “Black army”. The organization was created in 1949 thdo and consisted mainly of peasants-Communists. The group operated in the Western districts of Moldova, adjacent to the border with Romania.

a Catalyst to the “rebellion” was held in July 1949 operation “South” for the deportation of “unreliable” Moldovan families. Unknown provocateurs actively spread rumors about the continuation of the action.

Initially, the organization was headed by the peasant Gavril A. who had the authority of the good Manager. Soon, however, he was killed in a shootout with the police. The new leader was Gavril Bodiu, who was wanted for the murder of a tax agent.

In their campaign speeches to the peasants he praised the Romanian orders, predicted the USSR’s defeat in the imminent war with the United States. Tips Bodiu not only fought campaign. “The black army” shelled grain procurement items dealt with teachers of scientific atheism. Bodiu personally killed the chief of the rural police and several collective farm activists. In October 1949, the terrorist was killed in a shootout with law enforcement officers.

the heyday of the group

After that the “Black army” led by a peasant, Theodore Kochkodan and his sister Mary Buruiana. The most audacious attacks the group has carried out in the spring of 1950. So, “carroarmati” disrupted a may day celebration in the village Kurta, a few weeks later they raided the party activists in the village District.

two days Later, gunmen attacked a police checkpoint in the village Cornova and seized the Arsenal. Criminals roam: they robbed stores, banks, paras co-operative trade. In the summer of 1950 the number of “army” has grown to 100 people.

the End of the bandit outlaws

Destroy wanton criminals ordered at the top. The Ministry of state security began active pursuit of terrorists in the villages, many of the perpetrators were killed in armed clashes. Was the operation to capture the leaders of the “army” of cells. One way of dealing with terrorists was guarantee amnistAI and a reward.

was captured by Theodore Kochkodan and Mary Burone. The first received the highest punishment, the second went to the camp. The 25-year time got over 40 members of the gang.

during the Soviet period the “Black army” has been produced in line with the Bandera and “forest brothers” in Baltic States. However, since Moldova’s independence, the group has been eulogized at the state level.