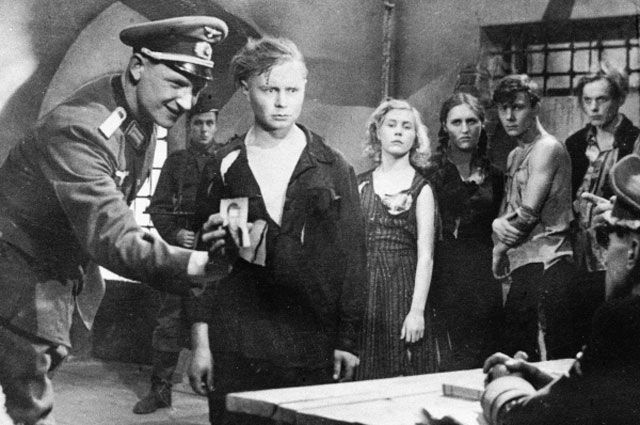 the Underground youth organization “Young guard” was established by members of the Komsomol of the city of Krasnodon near Lugansk during the German occupation in the summer of 1942. In January 1943 the organization was discovered by the police, the majority of its members were arrested and destroyed by the Nazis. Part of the boys and girls were shot, and the part alive was dumped in the mine pits. Then from above there dropped a mining trolley and threw the grenades pit.

During the great Patriotic war such of the underground Komsomol groups were created (and killed) a lot. Some of them even earlier, as, for example, in the Moscow region Vereya in the winter of 1941/42, called themselves the “Young guard”. But “Young guards” of Krasnodon became the most famous thanks to the novel by Alexander Fadeyev, studied in all Soviet schools.

But, despite this fame, still, after 75 years in the history of the Young guard of Krasnodon still full of dark spots. Many of the circumstances of the creation and disclosure of the organization, and the scope of its activities remain controversial.

How to change version

war correspondent Ivan lyaskovskiy and Michael Cats in hot pursuit in 1943, wrote about “Young guard” book “brave Heart”. It does not purport to trace the history of the organization. The main thing was – to tell you about the feat.

This book prompted the famous writer Alexander Fadeev write a great novel “the Young guard”, released in 1946. He was subjected to separation on the part of Stalin, as it was not reflected “leading role of the party”. Fadeev undertook the alteration of the novel. The second edition was published in 1951 and was included in all Soviet anthologies and literature textbooks.

In September 1943, Krasnodon was shot three traitors: the policeman Mikhail Kuleshov, Deputy head of mine Vasily Gromov and his stepson Gennady Pocheptsov. During interrogations, Kuleshov said that the arrested Commissioner of the “Young guard” Victor Tretiakevich under torture betrayed the organization.

Fadeyev, living in Krasnodon, close contact with the mother of Oleg Koshevogo, which brought in the novel as the present Commissioner of the “Young guard”. Name Tretyakevich he cheated on Stakhovich and turned it into a regular member of the organization.

meanwhile, in 1944 Vladimir Tretiakevich, one of the elder brothers, Viktor and also a member of the Ukrainian staff of the partisan movement, conducted its own investigation in Krasnodon, which sent a letter to Kalinin, Malenkov and chief Komsomol functionaries with the requirement to remove undeserved slander with his brother. Vladimir relied on the written acknowledgment of the surviving participants of the “Young guard” Valerie wrestler. However, when the case went to trial in the Komsomol Central Committee, the wrestler recanted his testimony and again asserted that Victor Tretiakevich under torture betrayed the “Young guard”.

In 1956, please, wrestler and four other members of the “Young guard” was invited to his dacha Nikita Khrushchev, who was then on a visit to Fadeev. According to wrestler, Khrushchev started talking about how to forgive Tretyakevich, who was the son of his friend and fellow countryman. A skirmish broke out, during which Fadeev threw Khrushchev to his face that he – a former Trotskyite. Two days after this episode, the newspaper reported the suicide Fadeeva.

the traitor was removed from Tretyakevich only in 1959, after the trial of a policeman Basil Podlinnym, who said that “Young guard” issued Pocheptsov. He admitted to his stepfather, and he advised stepson to turn himself in to the police. Documentary story “It was in Krasnodon,” journalist Kim Kostenko, published in 1961, confirmed this version.

In the late 90-ies appeared the recognition Molodogvardeytsev Vasily Levashov. On the eve of 1943, the underground fighters looted a truck with Christmas gifts for German soldiers. Boy, stausemu accidental witness to the robbery, they gave the silence a pack of cigarettes. With these cigarettes the boy was caught by the police, and he pointed to Pocheptsova, who, being arrested, out of fear given all that she knew.

were traitors to the “Young guard” among the executed traitors

the Preserved materials of the investigation, which was conducted against the traitors in Krasnodon in 1943. These materials are analyzed by researchers. Pocheptsov was first arrested by SMERSH February 16, 1943 March 2 but released. Re-SMERSH arrested Pocheptsova March 8 and more have not released.

In the case there is an interrogation of Pocheptsova on February 19, where he confesses his betrayal of the “Young guard”, and questioning Kuleshova of 20 February and 7 March, in which the former policeman confirms this fact, as well as calls Pocheptsova police informant. But somehow, after these confessions were both released from custody and then arrested again, and again Kuleshov released in April 1943, and only after that put finally. Obviously, all this evidence was concocted retrospectively.

Along with Pocheptsova and Kuleshov was arrested and then convicted and executed Gromov. On questioning, all three admitted all crimes, then retracted his confession. The situation is the same as in many spy cases of the time.

all three Wines in cooperation with the occupation administration was undoubted. Gromov was the Deputy head of the mine, who worked for the Germans (the head of the mine Dmitry Zhukov, was sentenced to 15 years imprisonment), Pocheptsov is his stepson, and Kuleshov – a policeman. At the same time, the city revealed shocked by the brutal violence of the invaders over the Komsomol underground. The perpetrators needed to find, and the three traitors were already there. It is noticeable that the interrogations Kuleshov slandered on Tretiakevich in the betrayal of the “Young guard” is also under pressure from the NKVD.

the story of the Ogreubiennym truck was known before, but usually covered so that Tretyakevich and Eugene Moshkov tried to sell on the market part of the stolen and was caught red-handed. Attempted sale of stolen goods shows that the conspiracy in the “Young guard” was established slightly better than nothing. This version does not affect Pocheptsova, but casts a shadow on Tretyakevich.

the Story of a pack of cigarettes puts the “Young guard” in the best light and takes all the arrows on Pocheptsova. It is not clear why this version had to be kept secret for more than half a century. There is reason to suspect that it was invented retroactively.

Pocheptsov also fell into the hands of the police and also could compromise the organisation, but it happened already after the first arrests. Of course, he has clearly told you everything I know, because were released by the policemen at will. But… he couldn’t talk about the “Young guard”, because I didn’t know about its existence at all!

In Krasnodon there were a few unrelated underground Komsomol groups (“Star, “Hammer”, “Hammer”; the last member was Pocheptsov). They, with the rank of Commissioner, led a trained Ukrainian staff of the partisan movement Victor Tretyakevich. This upper level where he knew only a few people, and was called “Young guard”.

there was a second and the chain of command. The first Secretary of the underground district Committee Philip buttercups, with the help of the escape from captivity of Lieutenant Ivan Turkenich, organized the “fighting five” of the underground and prepared for the uprising on the eve of approach of the red army. The “Young guard” buttercups kept in touch via Moshkova. But this side of the organization will remain forever hidden from the eyes, as buttercups, Moshkov and Tretiakevich soon died in the dungeons, and Turkenich, who was imprisoned during arrest and waiting for the arrival of the red army, went to the front, where he died in 1944.