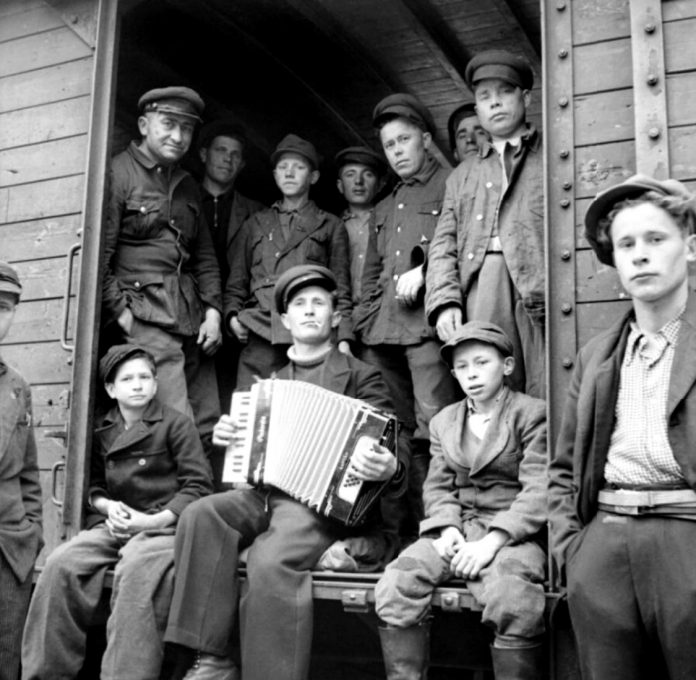 Over the years of the great Patriotic war, almost five million Soviet citizens were outside the territory of the USSR. In Yalta, Joseph Stalin insisted on the compulsory repatriation of Soviet citizens. Their way home lay through the filtration camps.

for a Long time the documents for the repatriation of Soviet citizens after the war remained classified, which on the one hand, given rise to various speculations on this subject, has tied the hands of serious historians, who until the late 1980s had no documentary basis for study of this critical topic.

the First scientific publication dedicated to the topic of the repatriation of Soviet citizens after world war II, was published in the Soviet Union only in 1990. It was an article of Victor Zemskov in the journal “history of the USSR”. It became possible due to the access of the historian to a number of archival documents. In particular, for funds formed in October 1944 the Control Commissioner of the Council of people’s Commissars (Council of Ministers) of the USSR on Affairs of repatriation, chaired by Colonel-General Filipp Golikov, the former head of military intelligence.

After Victor Zemskov the topic began to be studied and other historians.

the repatriation of so-called “displaced persons” and prisoners of war was one of the important topics discussed at the Yalta conference in February 1945. It was then that the leaders decided that repatriation should be mandatory. For this reason, immigrants in the publications and books are sometimes called “victims of Yalta”, and Churchill and Roosevelt “complicit in Stalin’s crimes”.

Fundamental was the question of who is considered at the end of the war “Soviet citizens”, subject to mandatory repatriation. On this account on the very same Yaltath conference it was decided to consider as such only those citizens who lived on the territory of USSR before September 1, 1939.

Adopted at the Yalta conference the division remained in force at the time of the Potsdam conference (July-August 1945). Because of this, for example, a request for extradition to the Soviet Union of the SS division “Galicia” was the allies rejected, since the documents only 112 out of 10,000 persons, who, it was September 1, 1939, Soviet citizenship. Them and issued.

All returnees conditionally divided into “Easterners”, that is, residents of the Soviet Union in the borders before September, 1939, and “Westerners” – inhabitants of right-Bank Moldova, Western Ukraine, Western Belarus, the Baltic States and Northern Bukovina.

These groups differed significantly from each other. This can be judged according to the questionnaires, explanatory notes of returnees and reports to the NKVD about the mood in the camps of the displaced. the Difference was in mentality and values.

According to Viktor Zemskov “we can safely say that at least 80% of “Easterners”, in the case of voluntary repatriation is still back in the USSR”. Among “Westerners” really was dominated by “defectors”, but in this group there were those who voluntarily agreed to the issuance of USSR, even having the ability to give.

By the end of the great Patriotic war, survived about five million Soviet citizens who were abroad. Over three million were in the zone of the allies, less than two million – in the area of influence of the Soviet Union in Europe.
have a Majority of “Eastern workers” (“Ostarbeiters”) – Soviet civilians deported for forced work in Germany and other countries.
Survived approximately 1.7 million prisoners of war and hundreds of thousands retreated with the Germans from the USSR, their supporters and refugees (often with families).

in addition to those “displaced persons” who did not wish to return to the SSSR, there were those who were recruited by British and American intelligence agencies, forcing to refuse from repatriation.

According to available documents, in August 1945 the Office of the Commissioner SNK USSR on repatriation Affairs had information about working in the displaced persons camps of allied “headhunters”.

They were selected among the potential immigrants who would contribute to Western science – engineers, doctors and candidates of Sciences, engineers. Simultaneously, the allies EN masse were forcibly given Soviet former Vlasov and members of the national legions, had at best a secondary education.

still, the concept of “forced repatriation” carries a negative connotation. Seems to be a voluntary repatriation, the Soviet Union would have refused to go back much more than half a million “defectors”, but that’s not entirely true.

half a million immigrants from the Soviet Union was the maximum permissible number of immigrants objectors. If there had been more – it could be fraught for the West social problems. Not all of those who refused to return to the USSR, found a place beyond its borders.

Until the late 1940s, in the displaced persons camps in Germany, Austria and other countries have thousands of former Soviet citizens who were unable to socialize in Western society. They were not wanted. Even those countries that had substantial land Fund for resettlement (Australia, Canada, Argentina) were reluctant to adopt the “refuseniks” at home.

And it is not only in the jobs and places for accommodation of IDPs, but in the fact that former citizens of the USSR were not perceived in the West as “its”. The world stood on the threshold of the cold war.

the extradition of the Cossacks Britain

the Most controversial in terms of legitimacy of repatriation is the issue of Britain nearly fifty thousand Cossacks in June 1945, as most of them belonged to the white guard emigration, that is, they were not in September 1939 poddanymi the Soviet Union.

nevertheless, the Cossacks in many respects fall under the category of immigrants, subject to arrest and trial. For example, for participation in punitive expeditions in the Soviet Union, Yugoslavia and Italy.

In the letter No. 597/6 from 26 may 1945, Lavrenti Beria informed Stalin and Molotov that England should be taken 40 thousand people – Krasnov Cossacks. They had to pass the ordinary for the “special contingent of the NKVD” process of screening and filtering. While the Cossack officers were seen as “strangers” and ordinary Cossacks were equal to “his”, that is, Soviet citizens held in filtration camps check. In fact, Britain has issued 46 thousand.

According to statistics, the Control of the Commissioner SNK USSR for repatriation Affairs, March 1, 1946, there were 5 352 963 Soviet citizens, but this amount took into account not only immigrants in the strict sense of the word, but “internally displaced persons”. If you do not take them into account, we get the following sum: 4 199 488 of returnees (2 660 013 civil and 1 539 475 prisoners of war).

the Period of mass repatriation actually ended in the first half of 1946. After that massive she wore. Prior to July 1, 1952 was 4 035 305 repatriated Soviet citizens.