Home Breaking What would happen to Russia if the poles beat the Russians in... 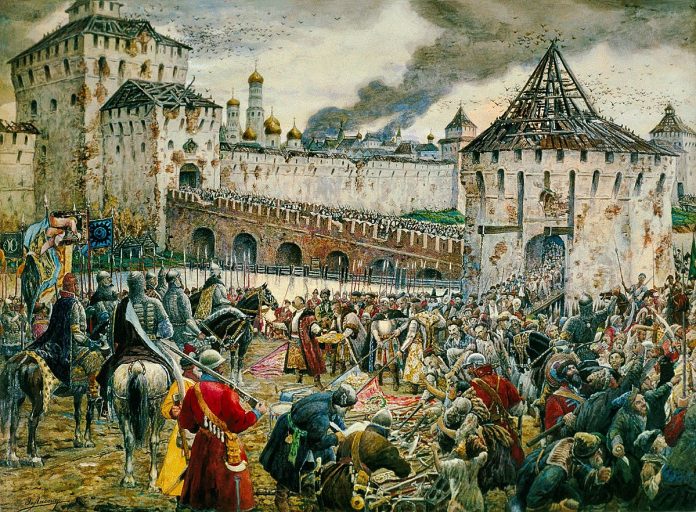 just need to specify: the idea that in the time of Troubles beginning of the XVII century, the main confrontation was unfolding between Russia—Poland, it is wrong. In Troubled times faced each other by various political camps of Russian society. Some elements of the Commonwealth have joined Russian forces, and, because of their own heterogeneity, not one.

That was a time of Troubles “Lithuanian people”

In 1569 the Kingdom of Poland and Grand Duchy of Lithuania created a dual state – Rzeczpospolita. Before that Moscow knew of the “Lithuanian people”, under which it went without saying that the Western Russian – Ukrainians and Belarusians. Sometimes, because of household features, they are distinguished Ukrainian Cossacks, which were called “Cherkasy”. Directly with the poles, the Muscovites faced only at the end of the Livonian war.

During a campaign of false Dmitry I in Moscow and nearly a year of the reign of the poles was part of the retinue of the pretender. The Muscovites almost did not distinguish between them and the usual “Lithuanian people”. The latter was still more than the actual poles as the first pretender, and in the second, and in the so called “Soviet” historiography “of the Polish-Lithuanian invaders” of a later time.

How did the actual Polish nobility

Until the summer of 1610 the poles who participated in the Moscow Discord, belonged first to the first, then the second false Dmitry. It should not be assumed that movement of the Polish gentry mass. On the contrary, the luck went then, mainly, adventurers, renegades of Polish society. Known the disapproval of many of the Polish magnates to adventures impostors. In addition, a significant part of the nobility was busy at that time her favorite thing – rebellion against the Royal power in Poland itself.

the Situation changed in 1610, when Polish participation in the Turmoil was legitimization. In the fall of 1609, the Polish king Sigismund III began the siege of Smolensk, intending to return it to Lithuania. Early in 1610 a group of Moscow boyars, led by Mikhail Saltykov concluded at Smolensk Treaty with Sigismund on the terms of his call to the throne his son Vladislav. In the summer of 1610, after the overthrow of the Tsar Basil Shuisky, a more significant group of Moscow nobles, headed by the Patriarch Hermogen, has openly called for the reign of Polish king’s son. To ensure his reign in Moscow, with the knowledge and approval of the interim boyar government, joined the Polish-Lithuanian case under Gosiewski.

found out about the election of Vladislav to the throne of Moscow, the Polish gentry in the mass of the left false Dmitry II and volunteered to serve as the new legitimate king. So, in the final stage of the time of Troubles the poles supported the king, recognized as such, for the most part of the Moscow elite. Hence, “victory of the poles” in the time of Troubles had only one species – the accession to the Polish Prince Wladyslaw and the beginning of a new Russian dynasty, and Swedish descent, dynasty Vase.

Now who in the Russian society has supported and who opposed the election of Vladislav to the throne. The most zealous opponents of the Polish candidate become supporters of false Dmitri II after the departure of the poles, and among them especially the Cossacks (Ukrainian and the don). After the death of false Dmitry II of their ataman zarutskiy has become. He became the soul of the First of the militia who went under the walls of Moscow for its liberation from the Polish-Lithuanian garrison in 1611. He provided crucial aid to the Second militia of Minin and Pozharsky in 1612, but was then betrayed them. Zarutskiy, lover of Marina Mnishek, was nominated by her newborn son on the throne. It was called “Varenka”, meaning the fruit of her cohabitation with the False Dmitry II, although he probably was the son of ForRutskoi.

Moscow to know how those who called Vladislav, and those who did not support this election, has dramatically turned against the candidate of the Cossacks and the support of the poles. Patriarch Hermogenes, with the help of poles, sends Russia message with an appeal in any case not to admit “Varenka” heir to the throne, to swear allegiance to him and lucaria Marina. The implication was that the legitimate king is Vladislav. Unknown no letters of Hermogen’s call to go to free Moscow from the poles. An outstanding historian of the time of Troubles of S. F. Platonov doubted whether they were at all.

the Conditions under which recruited Vladislav

a Secret agreement on 4 February 1610, in which part of the Moscow nobility were willing to acknowledge king Vladislav, contained such important conditions: not to punish anyone without a trial, relatives are not responsible for the guilt of the perpetrator, their property shall not be confiscated without a trial no one not deprived of his ranks and titles, for his services the king raises people in rank, the Moscow people at ease to go abroad for study, no one is forcing you to change faith.

Open the agreement with the poles about calling Vladislav on August 17, 1610, composed for the most part the Moscow nobility and higher clergy, headed by Patriarch, was of a more conservative nature. Was excluded the article on free travel abroad for study, and the article about the rise of malacanang people of merit has been replaced by another – nepovolena to elevate foreigners to Moscow people.

however, The basic nature of the agreement is preserved. It was, in fact, the first Russian Constitution, limiting the power of the monarch by a bilateral Treaty and law.

What prevented the victory of the constitutional began

so, “the victory of the poles” would be, in fact, win best of the Moscow aristocracy, who dreamed of limiting the power of the autocrat on the model of the Commonwealth, of curbing the traditional tyranny of the Moscow tsars by force of law. However, the aristocracy only cared about their class rights, not caring about the rights of the lower classes and even the lower service nobility. But, in fact, that was the way of the formation of rights and freedoms in Western Europe: first, they received a higher class, then they spread to the lower strata of the population.

Two neighboring constitutional monarchy with a shared dynasty would have less reason for mutual hostility and more ground for mutual rapprochement. At the same time, subject to the conditions agreement calling Vladislav to the throne, was a no-brainer to change the state of religion in the Moscow state from Orthodoxy to Catholicism or Uniate Church.

the Poles, not wishing to send elected king Vladislav Muscovites themselves have lost the fruits of victory, when the ruling class of the Moscow state peacefully surrendered into their hands, and thereby predetermined the fall of his Kingdom in the struggle with Russia, which happened by the end of the eighteenth century.