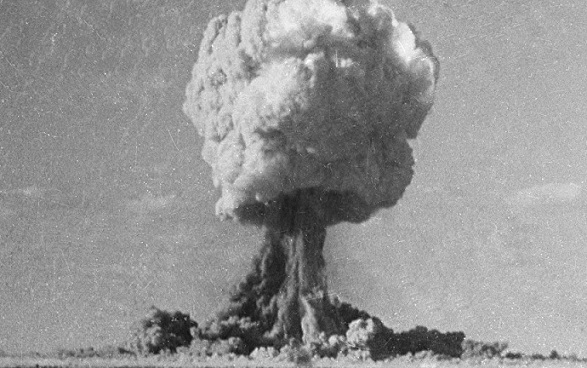 Nuclear collision of the leading powers many believe is almost inevitable, tying him with the biblical prophecy of Armageddon is the last war before the end of the world. However, the Russian President is not enough to simply click to the unavoidable happened. To activate the nuclear Arsenal of the country is only possible through concerted actions of several people.

the Attendant and a “guardian of the briefcase”

In an emergency the head of state manages the nuclear forces of Russia by the so-called nuclear suitcase. This device ensures the link with the strategic missile forces through an automated system “Kazbek”, which was established more than 30 years ago.

the Nuclear football, you can only use when receiving information about the attack from the enemy. It’s not just about the launch of Intercontinental ballistic missiles, but also the use of other weapons of mass destruction. As for a preemptive nuclear strike at the potential enemy, the possibility of its application excluded the current nuclear doctrine of the Russian Federation.

Initially, about the attack of the enemy finds out the operator on duty of the Main centre of missile attack warning, located near Solnechnogorsk in the Moscow region. It verifies the truth of the message, and then transmits the information to the media “nuclear suitcases”.

Directly to the President, “suitcase” brings its Keeper – the officer of communication service, always in sight of the Supreme commander. The soldier with a rank not below that of Colonel, by tradition, wear the uniform of the Navy.

Opening the device, the head of state is included in the interface of the portable subscriber complex “Cheget”, then introduces several encrypted keys and passwords.

What for the notorious “red button”, then its a simple click will have no effect. This attribute, however, was not always purely symbolic: under Brezhnev, who at the end of life has deteriorated vision, it is the “red button” has decided the fate of the world.

In 1995, Boris Yeltsin used the “Cheget”, when Norway was launched a meteorological rocket, which I mistook for ballistic. Find out the details, the President closed the “nuclear briefcase”.

defense Minister and chief of staff

Together with the President to activate the codes, the strategic missile forces should be two other people – the Minister of defense and chief of General staff. Each of them are inseparable liaison officers with the suitcases.

If at least one of the codes-passwords on any of the devices is entered incorrectly, the system does not work.

Thus, to run the Russian missiles with nuclear warheads, concerted actions of seven people (along with the duty operator). However, even if all they are going to die in the first attack, the enemy who attacked Russia, there will be no retribution. In this case created an automatic complex “Perimeter”, launching missiles without human intervention. In the West it is known as Dead Hand (“dead hand”).

In the United States also used nuclear briefcase. In fact, in 1950-ies in this country under President Eisenhower and was invented this device. Externally, the American version of “suitcase” like a ball for American football, covered with leather, which has been called the Nuclear Football. To operate nuclear-missile forces, the President of America should use titanium or gold card with a secret code. It is noteworthy that the leaders of the United States often lose this card.

instructions for use of the American “nuclear briefcase” is 30 pages. September 11, 2001 George Bush was so scared by the terrorist attacks that same day got the manual and started to read it, but beyond that it, fortunately, has not moved.

As we are assured by the military, existing security measures to rule out the possibility of launching ballistic missiles by mistake or by the will of one man.