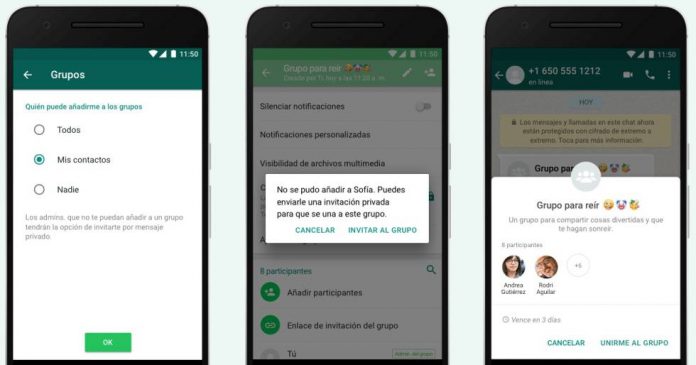 WhatsApp is still gradually adopting measures to protect the privacy of its users and will finally reach imminent, a long-awaited giving the user more control over the groups and, in particular, to avoid that add against their will.

The last 3 of April, WhatsApp announced the arrival of “new privacy settings for groups” by which it intended to give the user more control over the groups. What was he referring to the note? No doubt to the boredom of many who had seen that WhatsApp was already a tool with no control that would not stop beeping with notifications at all hours. While WhatsApp is a dominant platform in Spain and Latin america, there is always the possibility of using alternatives and it seems that since the company does not want to take risks.

The new function has begun to be distributed and is already present in countries such as India and, according to reports WABetainfo, it is necessary to have the version 2.19.110.20 iOS and 2.19.298 on Android to be able to activate it. Those who already can update to those versions, you must access the Settings or Settings/Account/Privacy, and in this section will appear Groups with three possibilities.

In the option Who can add me to the group, WhatsApp offers three choices: Everyone, My contacts and Nobody, although it appears that the signature belongs to Facebook have considered this last as too radical and in the final version of the app has been replaced by My contacts except…, an option much less aggressive and still offering the possibility of restricting rather the inclusion in groups.

What happens when someone invites a group to a user, and these restrictions make it impossible to access? He who invites will be informed of this circumstance, and you are encouraged to send the invitation using a private conversation. The above will have a maximum of three days to accept, or the invitation will be declined by default.