Home Breaking Why did Mussolini in 1942 to persuade Hitler to make peace with... 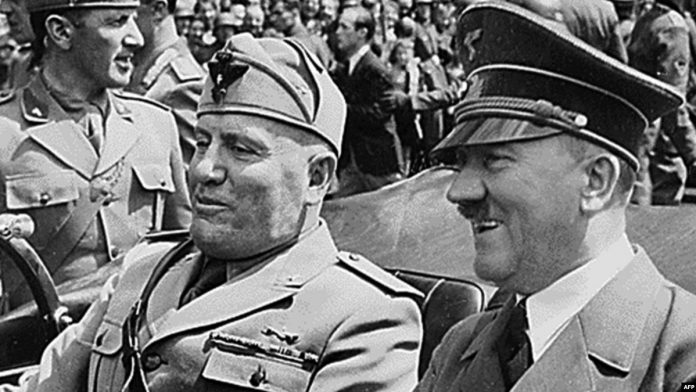 Shortly before the death of the Italian dictator, Benito Mussolini, told me that in 1942, tried to persuade Adolf Hitler to peace with Stalin. However, this plan came to nothing, as the Fuhrer, according to Mussolini, was “obsessed with Russia.”

“Ah, if I then listened to”

the so-called “spiritual Testament” Mussolini became known thanks to the French fascist Victor barthélemy. Corsican by birth, in 1945 he was the representative of the French people’s party under the government of the “Republic of Salo”. In February and April of 1945 at Barthelemy was held two interviews with Mussolini, who shared his thoughts on the eve of the final collapse of fascism in Europe. The book by Victor barthélemy “Communism and fascism”, published in 1978, is not translated into Russian language, but quotes from it quotes the French historian Marc ferro in his book “the Seven main leaders of the wars, 1918-1945: a Parallel history”.

At the beginning of 1945, Benito Mussolini was in deep depression. While formally remaining head of the Italian government, he knew that his country was occupied by the Germans, and that he was nothing more than a puppet. In conversation with journalist Maddalena MOLLE Duce admitted that “waiting for the end of the tragedy” not as a actor but as a “spectator”. Imbued with pessimism and talk of Italian dictator with Barthelemy. A significant part of the revelations Mussolini was dedicated to the events on the Eastern front.

“Ah, if I then listened to! – said Duce. – We made peace with Russia. In this war, not the Russian are our enemies, and the Anglo-Saxons”.

Mussolini claimed that from 1942 to persuade Hitler to start peace negotiations with the Soviet Union. In his opinion, Stalin would have agreed, as “only dreamed about it”. However, Hitler “obsessed with Russia,” has not wished to withdraw from their zavoevatLiska plans in the East. The German Fuhrer, according to Mussolini believed that England, as a “racial sister”, should agree. The Russia he represented the country wild “subhumans”, which we need to clear the area for German colonization. Mussolini himself did not consider the Russian “savages.”

“of Course, Bolshevism – the monstrous and criminal error. But Russia has produced great scientists, musicians, brilliant writers,” said he.

it is likely that in the words of Mussolini when he spoke of figures of Russian culture, was not double-dealing. It is known, for example, that in the midst of the great Patriotic war on the initiative of the dictator of Italian Director Renato Castellani filmed the story of Alexander Pushkin “the Shot”.

“All fools, except for Stalin”

As I thought Mussolini, after the armistice, in 1942, Russia would no longer be a “threat to Europe” and the Germans and Italians could have won world war II. Moreover, Mussolini believed that Stalin would be necessary to learn the interaction with military commanders. It did not work neither Hitler nor he himself.

“Stalin by anyone – only a fool. The rest are all fools,” said Mussolini, two days before his death.

How reliable is the evidence? It is possible that Barthelemy, who after the war was one of the leaders of the French far-right movements, can use their conversation with “the main fascist” to give Mussolini some of his own ideas. Therefore, his book is little taken into account by historians.

In any case, the policy conclusion of peace was due not sympathetic to the Russian people, but only panic Mussolini. In the end, in 1941, Mussolini and Hitler visited occupied territory of the Soviet Union as a conqueror. And in April 1945, after the death of Franklin Roosevelt, he is ready to negotiate with all parties, just to stay alive.

“Duce was hoping for a drastic worsening of Anglo-Soviet relations, paving the way for the search butnew approaches as to the Russian (playing on the ambitions and the expansionist intentions of Stalin) and the British (using the anti-Soviet attitude of Churchill),” writes the biographer of Mussolini Lev Belousov.

Perhaps if the Italian dictator at the head of the Axis, its sophisticated diplomacy could turn the tide of the war. But the leader of the Union, as we know, was not Mussolini.