Home Breaking A work of the primitive Cimabue reached the record price of 24... 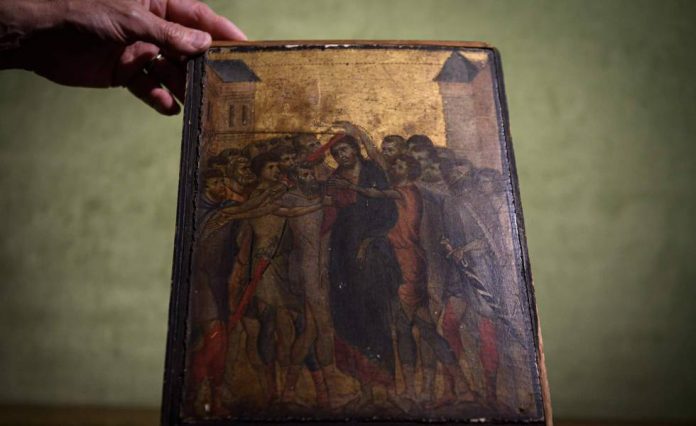 Since it is called the “miracle of Cimabue”. The small box found by chance this summer at the home of a nonagenaria to the north of Paris has become the work of a painter primitive —that is to say, previous to 1500— most expensive in the world.

Christ mocked Cenni di Pepo, called Cimabue (1272-1302), evaluated between 4 and 6 million euros, was sold Sunday at an auction in the municipality of Senlis by 24 million. It is unknown the identity of the buyer. The daily Le Figaro points to the marriage of collectors chilean Álvaro Saieh Bendeck and Ana Guzman Ahnfelt.

Eight people, three of them in the room, pushed by the box. The initial price was 3 million euros. In less than ten minutes amounted to the final price. Was a “man with glasses and hair nourished, sitting in the first row,” who, “glued to the phone, he left at once accompanied by a bodyguard,” says Le Figaro, which also publishes the identity of the alleged buyers.

The box, awoke the interest of “all the great museums of the world” and “collectors of contemporary art,” said the specialist in charge of the sale, Éric Turquin, in remarks quoted by the agency France Presse.

the history of The Christ mocked, has the makings of a plot of mystery that adds to the list of puzzles are not solved in the history of art. How and when it came the box to the house of the old woman in Compiègne, the French population is known above all for being there, where was signed the armistice between Germany and France at the end of the First World War? How he avoided ending in a store room or sold for a bargain price?

The woman, whose identity is unknown, was going to move into a care home for the elderly and an expert of the auction house Actéon went to your home to assess your goods and put them up for sale. The box of 25×20 cm, was hung in a hallway between the kitchen and the living room. The family believed that it was a Russian icon, and I ignored their provenance. Not granted greater value.

A hundred of objects of the dwelling is sold for around 6,000 euros and several items of furniture ended up in the landfill, according to the newspaper Le Parisien. But to the expert, Philomène Wolf, called her attention to the box. Above all, your golden background. And he had a hunch.

“then I thought that it was the work of an early Italian,” said Wolf to Le Parisien. “But I never imagined that it was Cimabue”. Turquin certified that the author was Cimabue, considered the forerunner of western art and teacher of Giotto and praised by Dante and Vasari, as we are reminded by the expert in a press release.

has been added as well a new work to the dozen works already known of Cimabue. Among them, The flogging of Christ and The Madonna and the child, who are now respectively in the Frick Collection in New York and at the National Gallery in London, and that part, as the Christ mocked a diptych composed of eight panels of a similar size.