Home Breaking Alexandra Kollontai: the fate of the first free woman in the USSR 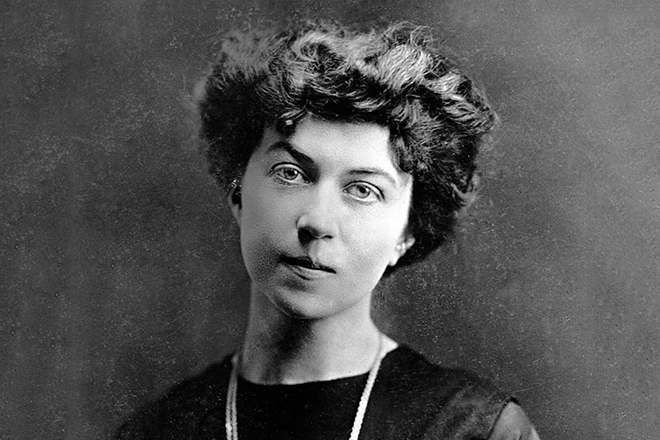 Biography 08/03/20 Alexandra Kollontai: the fate of the first free women in the USSR

Alexandra Kollontai – first female Commissar, a fighter for the liberation of women. She created civil marriage, saved the USSR from the war with Sweden, but the merits did not save her from accusations of espionage and the legalization of prostitution.

Alexandra Kollontai his personal life beginning with a “Swedish family”. Against the will of her father she married for love to a poor officer – Vladimir Kollontai, leaving two eligible bachelors: adjutant of the Emperor Alexander III to Vladimir Catalina and the General’s son, Ivan dragomirova. Latest after the failure of Alexandra put a bullet in the heart.
Husband adored her, but Wake Kollontay loving wife and homemaker he failed. “I wanted to be free” – she confessed. She soon found a distraction in the face of a close friend of Vladimir, officer Alexander Satkevich, who lived in their family house. “I assured both that they both love – two,” recalled Kollontay your love triangle. Then, the situation began to weigh her, she literally ran away from home, traveled to Switzerland to study Economics, leaving time husband, lover and young son Mike. “I to my old life will not return. Let my heart would break from grief due to the fact that I will lose the love of Kollontai, but I have other goals…” reads the entry in her diary.

Historians call Kollontay too revolutionary even for his era. Honest, forthright, with a keen sense of justice, she was first in everything, in the truest sense of the word. Alexander represented that class of emancipated women who understand why they found freedom. The most accurate motto Alexandra would be this – “Freedom, justice, Eros.”

She became the first woman Minister in the world, ahead of several decades, Golda Meir and MargaRET Thatcher. However, the position which she occupied, was called “the people’s Commissar of public charity in the first Council of people’s Commissars”.
Alexandra Kollontai was also the first woman diplomat in the world when in 1922 she was appointed Ambassador to Norway, thanks to its strong relations with the socialist movements in Europe.

the Struggle for women’s rights

Alexander was descended from a noble family of Domanovica, she was the General’s daughter. No woman of the highest Soviet circles could not boast of such secular manners, they had Kollontai. But the exquisite Alexander sometimes can be found in the proletarian dress embracing a drunken sailor. She could be different — the “Valkyrie of the revolution,” as Trotsky called it, advocated the emancipation of the proletariat and women’s liberation. For the first time about the horrors of life simple woman, noblewoman Kollontay learned when my husband visited, out of curiosity, and a weaving factory. Dirty barracks, gray faces of the workers, covered with rags dead baby in a corner — all this made for a sleek lady with a lasting impression. In the future Kollontay will be one of the most prominent advocates for the rights of women in history. Thanks to her, Soviet Russia will have paid maternity leave, free maternity hospitals, kindergartens and sanatoria, as well as a very scrupulous attitude to hygiene, to which Alexandra Russian women do not pay enough attention.

family ties with Vladimir Kollontai, who remained only formal since the departure of Alexandra in Switzerland, frightening her weighed. The laws of the Russian Empire, a woman could divorce only with the husband’s consent. However, the husband refused to give her consent. However, he personally has been a new companion. But soon Alexandra is plunged into a passionate affair with the people’s Commissar for naval Affairs Pavel Dybenko.

Their first meeting was very romantic. During propaganda speeches before Alexandra sailors on one of the ships, someone dumped the stocks on which she was raised. And there was a young Dybenko grabs her in his arms, jumped into the boat and brings her to shore. Then she recalled Kollontay: “so I’m in this armful and left.”
Alexander was impressed with Paul, who was younger than her 17 years. In her diary she wrote: “This is the man who dominates the intellect, and the soul, heart, will, energy. He is the eagle. Love it the combination of strong will and ruthlessness, makes you see him as cruel, terrible Dybenko.” The passion was mutual, and in 1918 Kollontai did Paul offer. It was the first record of marriage in the first book of civil status acts of the Soviet Russia. From this moment, all Soviet citizens could officially marry in a matter of minutes, bypassing the Church altogether.

During the ambassadorial mission of Alexandra Kollontai, who for his life had been Ambassador in Norway, Mexico and Sweden, she fell under the suspicions of the NKVD. She had many close friends and associates among foreigners, that in those days was considered a great impertinence, and was considered tantamount to treason. Stalin himself said that any foreign citizen could be a spy. In addition, Kollontai was a lovable woman, and therefore, in the opinion of the Soviet leadership, in a personal conversation could accidentally blurt “something extra”.

In 1937, shortly after the shooting Pavel Dybenko, with whom Kollontai was at that time already there was no relationship, and her ex-lover Alexander Shlyapnikova, she urgently summoned from Stockholm directly to the office of the people’s Commissar Yezhov. They were all questions about relationships Alexandra with her close friend Marcel Bora, French Communist who was once broke relations with the USSR. Kollontai then released, in her diary, left a record of this event: “to Live terribly”. Surveillance of her continued confidence of Stalin, she lost. After her death there were rumors about some lists of French agents, scouts, recruited during the Second world wars, which allegedly featured the name of Kollontai, which was my number – the agent number 338.

In the diplomatic field Alexandra Kollontai achieved incredible success. Thanks to her, the Soviet Union concluded a number of lucrative commercial contracts. She saved the prestige of the Motherland during the Second world war, proving that the bombing of cities by an unidentified fighter was the handiwork of Germany, not the Soviet Union. Germany used a similar provocation in order to involve Sweden in the war as its ally.

But all these achievements did not protect Alexander, an old Bolshevik, one of the members of the Leninist guard of the suspicion of Stalin, who constantly saw her as a spy. In 1943 Kollontay for health reasons at the time left his post and went to a suburban sanatorium in Stockholm. A few weeks of her absence from the Embassy had been all her personal archive, which, a few days later, was already in Moscow. All of her letters, memoirs, scrapbook, carefully studied the NKVD. From the report of NKVD, comrade Rybkin stated that the archive was stolen by the wife of Zoya Rybkina, an employee of the Soviet Embassy in Sweden. She accused Kollontai suspicious and unknown for government relations. A cryptographer Petrov suddenly announced by the French agent, recruited by an employee of the French intelligence Gilberti of Banon. In March 1945, Kollontai was urgently summoned to Moscow. She was already over 70 years old, and she moved around only in a wheelchair. She was forced to leave his post, and from now on was “life” placed under house arrest.

Active struggle Kollontai for women’s emancipation and the revolution in the bourgeois family values have led to the fact that her name began to link the legalization of prostitution in the country of the Soviets or such scandalous documents as, for example, the Decree of Vladimir Sovdep “On the emancipation of women.” According to the latter, “1 March 1918 in the city of Vladimir abolished private “right” to the possession of women. Any girl over the age of 18 is declared to be the property of and must be pre-registered in the “Bureau of free love” in the “Committee of vigilance” and has the right to choose amongst men from 19 to 50 years temporary roommate – a friend.”

Alexandra Mikhailovna was also attributed to “theory of a glass of water”, which is denied the love relationship between a man and a woman and drove all instinctive sexual needs. The reason for the establishment of the connection between the name Kollontai and this theory was its statement: “For the working class a great “flow”, the smaller the tightness of the intercourse of the sexes is identical, and even directly derived from the main objectives of this class.” Indeed, in his works, Kollontai wrote: “Bourgeois morality demanded everything for the beloved person. Proletarian morality prescribes: all for the team! Eros will take a worthy place among members of labor unity. It’s time to teach a woman to take love, not as the basis of life, but only as a way to reveal your true self”. However, historians working in the first periods of the Soviet state, in particular Alex Penza, think it’s all a vulgarization of the deeper ideas of Alexandra Kollontai, who fought not for “promiscuity”, and for absolute equality in the “new family”.