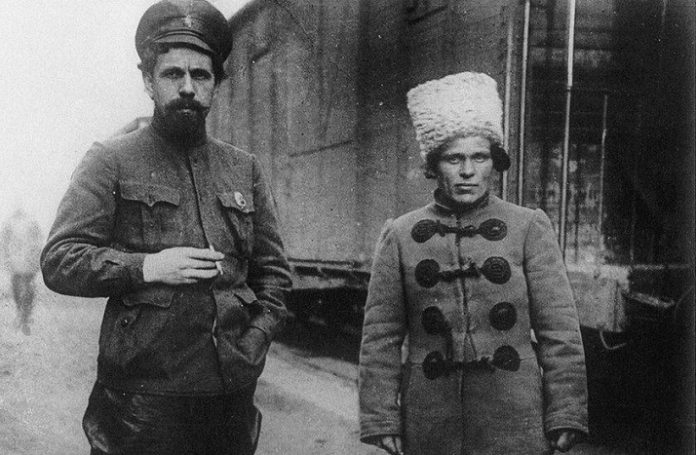 Nestor Makhno – an iconic figure of the Civil war. In popularity it can be compared only to that of Chapaev. But if the Chapaev cult was propagated by the Soviet film and literature, Makhno tried to portray the devil incarnate. However, in spite of all the efforts of the purposeful demonization of the image of Makhno as gave him more charisma. Find something attractive in it, even the staunchest opponents of his anarchist political views. And, more importantly, Makhno was an iconic character for Ukraine, where mainly proceeded his flurry of activity, and Russia.

His revolutionary struggle the teenager Nestor Makhno began with expropriations and killings, and in 1910 was sentenced to death, commuted to life penal servitude. A General Amnesty announced by Nicholas II in 1913 in honor of the anniversary of the Romanov dynasty, such as it is, is not covered. Makhno was released on freedom only after the February revolution.

Makhno returned to his native huliaipole, Yekaterinoslav province and was able to quickly gain credibility there. A convict in the Butyrskaya prison, he became acquainted with the doctrine of anarchism, and now began to bring it to life. Being elected Chairman of the local peasant Council, he began the expropriation of landed estates and distributing it to the peasants. Thus campaigned for the Union of peasants into agricultural communes. Makhno openly ignored all orders of the Provisional government and put the local authorities. Equally hostile was the attitude of Makhno to the “bourgeois” Central Rada in Kiev. He organized a local armed militia from peasants and took sole power over the Gulyai-pole district.

Naturally, he could not welcome the fall of the Provisional government and led local forces, bOroshaza for the establishment of Soviet power in Ukraine. When Ukraine in the spring of 1918 was captured by German troops, Makhno after hopeless attempts to organize at the scale of the County to repel the invaders fled to Soviet Russia. He came back illegally in July 1918 with the money and powers from the Soviet all-Ukrainian Bureau on the leadership of the rebel movement. Forming partisans, Makhno made a series of successful attacks on occupation troops and samostiynicheskogo the police. His name resounded throughout South-Eastern Ukraine.

during this period, Makhno worked very closely with the Bolsheviks in the fight against the Petliurists and then the whites against Anton Denikin. In February 1919, he agreed to the inclusion of his “rebel army” as the brigade part of the 1st Ukrainian Soviet division Zadneprovsky. However, on the political front, Makhno has been strong disagreement with the Bolsheviks. He was already accused the CPSU (b) in the usurpation of power, demanded the dissolution of the extraordinary bodies, freedom for all leftist revolutionary parties, the abolition of the surplus. Ideal for Makhno was the freestyle Federation of labor communities, not subordinate to any state authority.

In June 1919 the red left part of Makhno on front without support, then accused him of treason. The Chairman of the revolutionary military Council of the Republic L. D. Trotsky declared Makhno an outlaw. The territory, however, where the act of Makhno, was captured by Denikin. In these circumstances, Makhno led a guerrilla struggle against the whites. He convinced the peasants that the white is the main enemy, as they want to return land to the landlords, and the Bolsheviks – after all, the revolutionaries, and they can pay later. Because of the actions of the white guard authorities propaganda fell on fertile soil. The inability of Denikin and his henchmen to arrange the rear contributed to the success of Makhno. Its peak of influence came in the autumn of 1919, when the Makhnovist flying squad captured Ekaterinoslav and more important cities. Makhno free Republic has covered the territory, which was part of four provinces.

Makhno expelled and killed white “state guards” and returning landowners, re-distributed the land (and captured army property) to the peasants. As a person who denied private property, yourself Makhno did not take anything. In Gulyai-pole freemen monetary circulation was forbidden. However, to destroy it in fact, the Makhnovists could not. Numerous discounted the bills issued during the Civil war, the various governments, the Makhnovists put their “stamp”, and in this form they continued to go among the population. They Makhno paid for made requisition if the bourgeois was” lucky to be alive.

the Makhnovists were not spared falling into their hands, German, samostiynicheskogo and the white guard soldiers, officers and police officers (the ones in the case they were paid the same). Makhno repeatedly accused the Jewish pogroms. And maybe individual units of the Makhnovists and was involved, but he Makhno shot for such things, if she learned them.

the Detachments of Nestor Makhno greatly helped the red Army to return to Ukraine. However, after returning back to the surplus, which farmers strongly resisted. Then the red started to liquidate the “gangs” of Makhno. But the aggravation of the situation – an offensive from the Crimea of the white guard troops of Peter Wrangel – forced the Bolsheviks make peace with the popular “old man.” Makhno did not take long to beg, hung came to him to negotiate the neutrality of the emissary and Wrangel at the head of his lads went to finish off the whites.

After that Makhno had finally become a hindrance to the new government. Exactly on the 1921 peak activity of Makhno in the fight against the Bolsheviks. Coating on their carts a day until 100 km, the units farther suddenly appeared where they did not expect, leads to fear of the Bolsheviks, returned to the peasants confiscated their bread. But the forces were too unequal. Taking advantage of the superiority of modern civilization over local revolt, the Bolsheviks were forced Makhno with a handful of associates to flee to Romania.

Fatal turned to Makhno delusion that his small Republic would be able to resist the power of a great state or that it will leave her alone. However, in case of victory of white movement Makhno would have had not the best end.