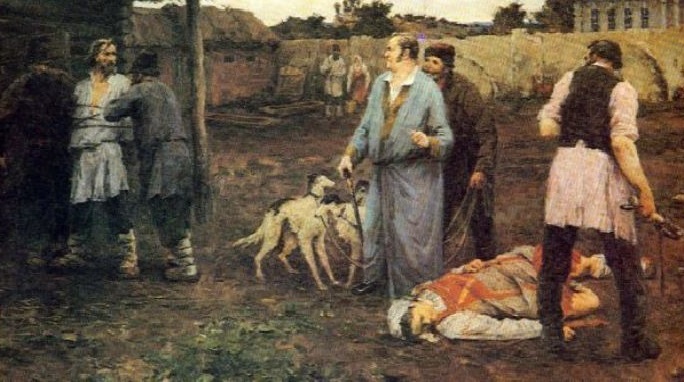 the Russian peasant of ancient times depended on the landowner. Serfdom existed in our country until 1861. Most of the cultivators were the personal property of noblemen. The master could do with them almost anything. Any attempt of the inhabitants of villages and villages to defend their dignity was seen as a rebellion and were brutally suppressed by the police. Meanwhile, the Russian leadership has adopted decrees limiting the landlords ‘ tyranny.

Serfs had no civil rights. They were completely dependent on the nobleman on whose land they lived and worked. The master could even take away the child from the parents, and then:
to make him his servant in the estate;
rape.
to sell.

Nobody had the right to marry or to marry without the permission of the landowner. Some people were forced to marry against their will. Many of the nobles enjoyed not only the right of the first night, they believed that the fortress girls and women are required at any time to satisfy his master. However, sexual violence was exposed and men and boys – depending on the personal preferences of the owner.

the Fortress was subjected to corporal punishment, sometimes they were beaten to death. People sold, separated from their families. In the eighteenth century a list of the rights of masters was extended. From 1736 the gentleman could now determine the fate of his peasant, who escaped. In 1747, the landlords received the right to sell the serfs on recruiting service, and in 1760 – to exile in Siberia.

For a simple husbandman gentleman was the host, judge and executioner.

According to Russian law, the murder of any person always been a criminal offense. But the punishment depended on the social status of the victim. So, the Cathedral code of 1649 contained such a recommendation to the landowner, slave which Somaviaflax left his possessions, and then were returned to him by the authorities: “…To he his fugitive a man to death, killed and mutilated, and hunger starved”.

Even in the late eighteenth century, when serfdom reached its peak, the master had no formal right to take the life of the peasant. However, if the person has died as a result of corporal punishment, such cases are almost never investigated. The landlord was enough to cover his tracks, a frightened serfs were silent. Allegedly, the man died by the will of God.

the Gentleman-sadist, tortured to death dozens, and sometimes hundreds of people, had only faced one punishment: taking the estate under the guardianship of the state. In this case, the management of the estate passed into the hands of appointed officials, although the gentleman retained the right of ownership and he continued to receive income from the estate. However, such measures were exceptional, and the state guardianship, as a rule, did not last long.

the Murder of a peasant belonging to another nobleman, also remained unpunished. It was required only to reimburse the cost of the deprived life of a serf. And considering that people in Russia were estimated not more expensive than a good horse or a purebred dog, many masters the fine does not scare.

Forced to work on Sunday

Not to say that senior management does not care about the needs of the peasants. In 1797 Emperor Paul I adopted a Manifesto on three-day corvee. This document was an attempt to limit the exploitation of disenfranchised people.

the King allowed the landowners to use the labor of serfs in his field no more than 3 days a week. Moreover, they cannot be forced to work on Sundays and Church holidays. The rest of the time the farmers were given the opportunity to work on their plots to fall to pay to the owner the prescribed dues.

However, the manifest was of a recommendatory nature, almost nobody played. Boon usually occupied 6 days a week, some gentlemen were forced peasants to work on Easter. Other landowners generally robbed the farmers of their allotments. Then, powerless people were forced to master rotten 7 days a week, receiving only meager rations.

Sold at fairs and auctions

the Image of enlightened monarchy, which sought to follow Catherine II, a little spoiled slave orders that existed in Russia. Therefore, in 1771, the Empress issued a decree forbade peasants to sell “under the hammer”.

the fact that the property of the bankrupt nobles often were sold through special auctions. Serfs also went to the one who will pay the price. Such events where people were sold along with the cattle, was visited by aliens, that spoiled the country’s image.

However, the decree of the Empress followed only formally. Just when implementing a farmers auction resourceful organizers of the auction have ceased to use a hammer.

And in 1808, Alexander I was officially forbidden to sell to people at fairs. Although the only penalty for violating this decree was a reprimand to the landlord from the leadership of the local Nobility. However, such a censure could have been avoided, stating that peasants are not sold, but only sent to the service under a contract of employment.

That is an Imperial command is not actually executed. And trade serfs, including fairs, actively conducted until 1861.

Separated family members in the sale

Another attempt to limit the landlord’s tyranny has made the Emperor Nicholas I. In 1833 it was forbidden to separate families of serfs upon the sale or donation to other masters. First and foremost it was about the inadmissibility to take away children from their parents.

This vicious practice was officially introduced in 1696, when Peter the great issued a decree allowed the nobles to take away the peasant youths in their estates, to swell the ranks of domestic servants. Most often, the parents took away beautiful girls 10-12 years old.

Nicholas I forbade also to separate when selling brothers and sisters if they wouldyli orphans. However, the decree of 1833 was also not working. Some landlords, wanting to get extra income regularly took away teenagers from their parents and transported to the fair. The tears of mothers whose children were taken, no one in calculation was not accepted, because for a pretty girl, for example, you can get 10 rubles, and sometimes more.