Home Politics For non-quarantine – death penalty: how the world’s governments struggle with breakers 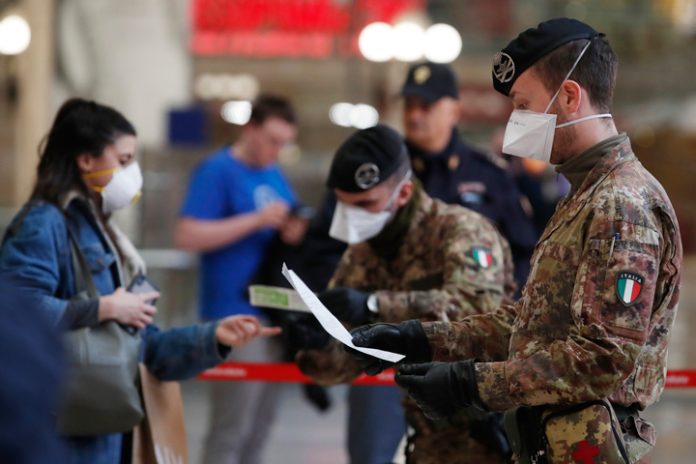 In UK, where the coronavirus has infected even the Prime Minister, Boris Johnson, the man who “for fun” will begin to simulate a cough in public places, facing real prison time. Such a “joke” will cost the offender to two years imprisonment.

in addition, as of March 26, the country has a system of fines for failure to comply with quarantine mode. If the person is caught for violating conditions of isolation for the first time, he will have to pay £ 60 (about 6 thousand), or, if the payment will be made within two weeks – 30 pounds). The repeated fault will have to pay 960 pounds (about 93 thousand rubles).

tough measures against violators of the quarantine regime is now in China. Criminal code of China provides even the death penalty for citizens who willfully do not comply. To capital punishment can say patients already diagnosed with the coronavirus, but they refuse treatment and break the isolation mode. In addition, the death penalty awaits those who during the epidemic will harm the health care provider or ruin the protective equipment of the personnel.

in addition, prison terms threaten those who are caught spreading false information about the virus, corruption, as well as the sale of counterfeit medicines. In total in China there are approximately 20 types of crime associated with new virus.

In USA the punitive measures taken by both Federal and local authorities. For example, in the state of Texas person not complying with the regime of self-isolation, can issue a fine of 2 thousand dollars or even placed under arrest for 6 months. In Wyoming, the fine is 10 thousand dollars, and imprisonment may last year.

Six months in jail or a fine of 10 thousand dollars threatens the citizens of Singapore that will specifically violate the social distance of 1 meter from other people. The same punishment is waiting for the heads of the comptions and organizations who are not able to provide Seating for their employees and clients at the same distance.

For violators in Italy the penalty of deprivation of liberty for a term not exceeding three months or to a fine of 206 euros (17 thousand roubles). For two weeks the police have written more than 50 thousand in fines.

In Spain persons who violate the quarantine can be fined up to 600 euros and sentenced to prison.

the Law in France for violating the quarantine provides for a fine of 135 euros (plan to increase to 375 Euro), if people went out of the house without a good reason. French police have fined more than 4,000 people.

the Man, who did not want 14 days to be on isolation in Israel, face up to seven years of imprisonment. To leave the house in exceptional cases: to buy products in the nearest store or visit the doctor or pharmacy. If the offender is caught, it will be fined in the amount of $ 820 (65 thousand). Only for the first day of total quarantine them received 200 Israelis.

South Korea at the end of February, introduced amendments to the legislation to more effectively withstand the threat of a pandemic. For violation of the conditions of isolation people have to pay a fine in the amount of 2.4 thousand dollars, but after the entry into force of the amendments, the penalties become even tougher. Now citizens can go to prison up to one year and be forced to pay a fine of up to 8.2 thousand dollars.