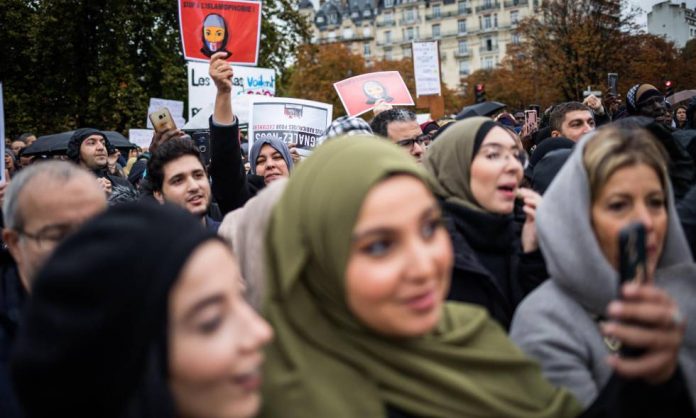 The output class of a high school Gabriel Havez in Creil, 50 kilometres from Paris, is a stampede of teens anxious to leave the school grounds. Only two girls pause for a moment just set foot on the street, to wear, with fast hands that reveal the habit, the veil over the hair before continuing on your way. By the morning it made the inverse operation to enter class. It is the law. Since 2004, in the French schools it is forbidden to use any religious sign “flashy”, either a hijab, a kippah or a crucifix of great proportions. “Since the promulgation of the law, in all schools in France the norm is respected. It is something that everyone is integrated here and there is no problem”, says the director, Pierre Pompier. But a new proposal from conservative politicians, who want to prohibit that the mothers who accompany students on extracurricular activities to wear veils, proves that the debate over the hijab is not, or much less, closed.

The measure —which is opposed to the Government of Emmanuel Macron, who yesterday reiterated that the 2004 act are sufficient to ensure secularism in the school environment— would mainly affect schools in areas with a high number of immigrant population as the Gabriel Havez. It was here, now 30 years, where he broke out for the first time the debate about the veil, when three students came to class wearing the hijab and were thrown out, which ended up sparking a national polemic.

The case of Creil was the trigger for the adoption of several laws to restrict the use of the veil, as the one of the schools in 2004, the prohibition of carrying in the street clothes that hide the face such as the burqa or niqab, issued in 2010, or even the labor reform in 2016, that opened the door to limiting the use of hijab in private companies. All this in the interests of secularism enshrined in French law but that, in the political context and current population, is used by some to mask positions islamophobic.

None of these regulations have managed to bridge the veil debate, which has resurfaced after that, a couple of weeks ago, a politician of the ultra-right urge to a woman who accompanied several students to remove the hijab in a public debate. This Tuesday, the Senate approved a proposed law from the conservatives to ban this garment to the accompanying in extracurricular activities, despite the fact that it has no prospect of success, since the government majority in the National Assembly expected to slow it down. During the heated debate, a senator defender, the initiative came to compare mothers with hijab with “witches of Halloween”. On the eve of the vote, a former candidate of the far-right National Front, which injured two people in an attack against a mosque in Bayonne.

With the increase of the tension, Macron warned on Tuesday against “those who want to sow hatred and division” and used to do this, he said, the argument of secularism “to combat a religion or another.” “Secularism is not the negation of religion and an instrument of struggle against the religions, but a value that completes the triptych republican (liberty, equality, fraternity) in the league and strengthens each of these pillars,” said the president during the inauguration of the new European Centre of Judaism (CEJ) in Paris.

it is Not an issue that divides only to politicians and intellectuals. According to a survey by IFOP for the Journal du Dimanche on Sunday, the 78% of the French consider that the French model of secularism “is in danger”, according to a recent survey. For the 61%, islam is “incompatible with the values of French society”.

“The problem is that the debate [about the veil] is not developed in an atmosphere always peaceful. Returns in periods of crisis, accompanied, today, the risk of terrorism, and it is sometimes used not to mention real difficulties, as the lack of a real social diversity,” says Nicolas Cadène, the relator general of the Observatory of Secularism of Government and author of the book ” secularism for dummies.

The writer Leila Slimani: “there is Not a single veil”

Leila Slimani not carrying the veil. You don’t like that piece of clothing that, create the writer and feminist activist franco-maghrebi —very involved in the recent controversy that has lived in their country of origin for the case of a journalist imprisoned for abortion— only will disappear “when the women themselves, with education, feminism, with another relationship with their bodies, may feel less need to port it”.

the winner of The highest award of the French letters, the prix Goncourt, in 2016, it is aware that the hijab is not a garment anyone —“ever killed a woman for refusing to wear a miniskirt” as for the veil, “women are dying every day,” she recalls— but she also doesn’t like that the debate on secularism ends up reduced to a handkerchief because, he claimed in a recent interview in Paris, “there is not the veil. There are a thousand ways to wear the headscarf and meanings extremely different”. And this is a discussion, he warns, after that which often overlooks the “racism” and the reduction of women, a topic that has been dealt with in his work, among others on Sex and lies, sex life in Morocco. “A woman with a veil is not only that, it has a story, their reasons. And it seems we don’t see more than the veil. I very much appreciate the secularism, I think that is an extraordinary luxury living in a secular country where everyone keeps to themselves their religion. But while the people to respect secularism and do not seek to convince the whole world, has the right to live your religion as you want.”

The same case Creil broke out in the agitated political context of the autumn of 1989, on the eve of the fall of the Berlin Wall and newly published in France, The satanic verses, of Salman Rushdie, against whom the ayatollah Khomeini issued a fatua. The incident, school became a political issue that divided the Government of François Mitterrand and, since then, to the left parties and the intellectuals.

“Creil was a turning point. From that moment on, arises the debate about the veil as both a religious sign in particular as it can transmit, according to some,” explains Cadène in e-mail. Also changed the defense of religious neutrality, says by telephone the political scientist Philippe Pottier. “We’ve gone from the regime of the legal principle as to the principle of moral value, to the idea that society, the State that represents it, now defines not only rules legal, but also ethical behaviour, and moral, which is supposed to be allow to live,” says the director of the laboratory of secularity at the National Center for Scientific Research (CNRS).

“we’re in a time in which outweigh the emotions. Careful,” warns Cadène. “There is that appeal to reason. Stay firm on the implementation of the law (in this case, the right to wear a veil, but never to impose it) and calm to avoid any act emotional in addition would offer the argument of discrimination to the religious extremists that we should fight together”.