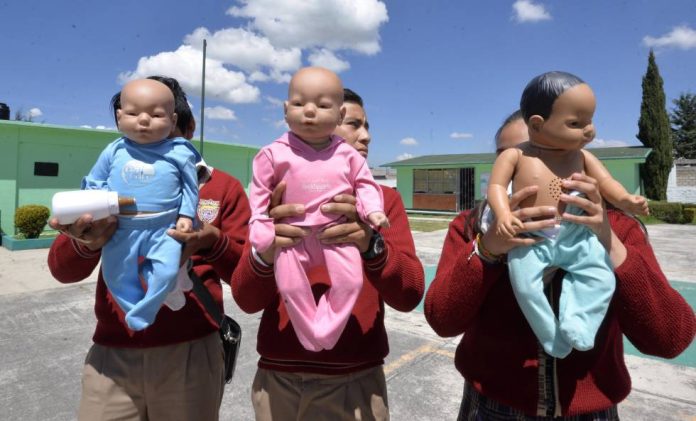 Through the doors of the hostel Tepeyac is to travel to Mexico more conservative. In this shelter for pregnant women expected to dona Amanda, who is in charge, with a brochure in hand that says “Help me live” next to the image of a pregnant woman. This old house catholic in the center of Xalapa, in Veracruz, has seen it happen in the past few years, dozens of young people who are pregnant. “Some come here with those ideas… abortion,” says Amanda Martinez with a frown, referring to the residents, among them girls as young as 10 or 12 years. “But with the time passed”, relaxes the frown.

Mexico takes a big step in the decriminalization of abortion, The mexican left seeks to decriminalize abortion without the bill it’s only one More than 4,200 people were denounced by abortion in Mexico in a decade

To Tepeyac, some girls come by their own initiative. Other, the minors of age above all, sent by the Secretariat of Health of Veracruz, has Martinez. “The DIF [System of Integral Development of the Family] and the hospitals already know about us, then bring them directly”, explains surrounded by images of the virgin and pope Francis. There they spend the months of pregnancy enclosed, just come to medical consultation and to mass. About 40 days after calving, the shelter, the returns to the public health system, which in turn, sends them home.

giving Birth is not the only option for these girls. The mexican law establishes that all women have the right to abort in case of rape. A standard was ratified in August by the Supreme Court, which has ordered the obligation of hospitals to provide that opportunity to those who request it. In the case of those under the age of 15 years, all pregnancies must be understood as a product of sexual abuse, because up to that age cannot be the consent of the sexual relationship, according to the federal legislation. But the children who ask to terminate their pregnancies in Veracruz face a myriad of difficulties.

Paula (not her real name), 13 years old, is an example of what happens in this State. After suffering two fainting spells in school, her parents took her on the 1st of march, to a medical centre on the outskirts of Xalapa. Was pregnant. She had been raped by a man of family and had about 13 weeks of gestation. His parents reported the abuse to the Prosecutor’s office and requested an abortion, but the hospital refused. “The director told them that they had instruction of preserving life, not ending it,” says Araceli Gonzalez, of Equifonía, feminist organization that accompanied the case.

the director of The medical center is liberated of the situation and ordered the same day the transfer of the child into the Center of Specialized Care in Xalapa (CAE). That second hospital, one of the most important in the State, refused to terminate the pregnancy because state law sets a deadline of 12 weeks in case of rape, and the girl had an estimated 13. The family then requested an intervention due to the risk of death, another of the grounds authorized in that entity. The dangers of a pregnancy under the age of 15 years are four times higher than in adults, according to the Committee for a Safe Motherhood in Mexico.

“Here we do not kill anyone”, gets angry at a nurse FALLS who prefers not to give his name. In the waiting room where he works, three other minors pregnant women waiting for their turn. The head of social work of the hospital ensures that decisions are taken in courts of the capital city is very far from what happens in the interior of the country. “You have to be in these trenches”, he justifies.

“What’s so difficult to provide the care to which they are bound?”, questions Araceli Gonzalez. Instead, the CAE ordered the Bioethics Committee, an internal body composed of its own staff, that holds if there was a risk of death. “They determined that it was not imminent, but the Criminal Code does not speak of the risk of imminent death,” he says. “It is an argument for continuing to deny the interruption of pregnancy and force girls to be mothers.” Veracruz is going to head in pregnancies of children in Mexico and until August had been recorded this year 17 births to girls between 10 and 12 years. In 2018, 39 of those ages were mothers in Veracruz.

Paula was able to put an end to his nightmare. He did so with funds of the organization Equifonía, in a private clinic in Mexico City, where the interruption of pregnancy is legal from 12 years ago. But many girls that go through your situation in the hospitals of Veracruz do not have that possibility. To those that do not know the right to abortion, they are not informed, says Gonzalez. And to that request, he says, they deny it under the motto of “here to protect the life”. None of the public hospitals of the State has in the current protocols of care before pregnancy child or access to Lawful termination of Pregnancy (ILE), according to data from the state Government.

If, in spite of the obstacles, the family insists on access to abortion, the choice that medical centers recommend is to travel 300 kilometers, to the capital. But many do not have the economic resources to move there. The easiest option facing many difficulties is that the parents give up the abortion. In that case they tend to be the hospitals who contact the Secretariat of Health to offer to the family to receive the girl into one of their hostels, where you will spend the months of pregnancy enclosed.

Mercy Perez, director of the local office of the National System of Protection of Children and Adolescents, admits that access to abortion in Xalapa depends on what the moral of the doctor on duty. “The non-application of the standard has to do with the ideas of some doctors who are objectors, who confuse their responsibility with a moral vision”. The charge of the office of the ombudsman for children also recognized the perversion of the system that pushes the pregnant girls to shelter catholics. “It is necessary to review the agreements that makes the ministry of Health with those shelters, because there has never been a control”.