Home Breaking Grigory Mayranovsky: what did the Soviet “doctor death” 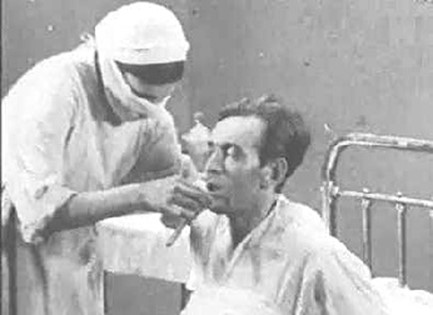 In the Soviet Union there was a special laboratory, studying the influence of toxic substances on humans. One of her employees – Grigory Mayranovsky – not just experimenting – he killed people.

In the USSR and in Nazi Germany, had his scientists put experiments on human beings, first and foremost, the prisoners of the Gulag. But unlike the German doctors-sadists they are not subjected to severe punishment. Their work was no arbitrariness – they acted on the orders of state security, and therefore for the good of their country.

Future “Dr. death” Grigory Mayranovsky M. (1899-1964), was started the journey of life as an ordinary Soviet citizen. He studied at the Tiflis University, he continued his education at the Moscow medical Institute in 1928 he became a graduate student, then academic and senior research fellow at the Biochemical Institute. A. N. Bach.
But then his career went up. From 1933 to 1935 Mayranovsky was led by the toxicology Department of the Institute, was promoted to Deputy Director. In 1935, it was called the all-Union Institute of experimental medicine, where he headed the secret Toxicological specularities.

Since the summer of 1937, consisting of 12-th Department of the gugb of the NKVD of the USSR Mayranovsky was led by the toxicology laboratory (“Lab-X”) is a special unit dealing with research in the field of toxic substances and poisons. There he became a KGB Colonel, doctor of medical Sciences and Professor.

the Secret laboratory was supervised directly by the Minister of state security. When the authorities came to Lavrenti Beria, the laboratory upgraded, changed its state, but the essence remained the same – the search for poisons, which it would be impossible to identify the autopsy of the victim.

a Terrible place, through which passed not one hundred test subjects were placed in a corner house on varsonof’evskiy pereulok in Moscow. The laboratory was divided into five compartments, and each of them had facilities for observing the course of the experiment. The action of each drug is usually tested on ten test subjects. For the sufferings of those who did not die immediately, watched through a peephole in a few days. If the “patient” was tenacious, he was finished.

For the enforcement of the death penalty group Mayranovskiy repeatedly used lightweight explosive bullets filled with aconitine – poison convulsive agents. According to the head of the unit, a similar experiment was carried out over the ten prisoners. The shots were made in “naboynye place” – death usually occurred between 15 minutes and an hour.

Working in the lab had for its employees the sad consequences: the part left in the bout, while others gave up and quit, two committed suicide, but either way everyone who participated in this conveyor belt of death, went through a painful transformation of the psyche.

the Poison is found

But Mayranovsky, in spite of everything, continued to work. He began experimenting with tasteless mustard, but positive results are not reached – the poison continued to be detected in bodies of poisoned them. More than a year studied the properties of ricin (a substance found in the seeds of the castor plant), conducting research and other poisons – colchicine, thallium, digitoxin. No one can really say how many people as a result of experiments “Dr. death” sent the light.
In the end were found the poison with the required properties. K-2 (Karbelashvili) killed the victim quickly – within 15 minutes – and most importantly, untraceable. To verify the reliability of poison the corpse was taken to the Institute Sklifosovsky, where unsuspecting the pathologists performed the autopsy. The conclusion was clear: the victim died of a heartOh failure.

the Perfect poison found, but its effective delivery into the body of the victim continued. The laboratory has invented a variety of mechanisms of administration of poison: it is mixed into food, was introduced into therapeutic injection, sprayed on the skin, invented the ingenious design of walking sticks, umbrellas, pens and bullets filled with poison.

In 1942 Mayranovsky made another discovery: he found that under the influence of certain doses of ricin (a protein toxin of plant origin), “test” begins Frank. Interested in the emergence of a new effective tool of investigation the leadership of the NKVD gave the nod to the development of the needed drug.

it took us Two years to experiment for obtaining truthful confessions. Interrogations with the use of medicines was carried out not only in the laboratory but also in the prisons of Lubyanka No. 1 and No. 2 and, apparently, had some success. But most often, the ricin was given the role of the killer.

the Most famous case of premeditated murder with the use of ricin is considered to be the elimination of the Bulgarian writer-dissident Georgi Markov during the cold war. A poison capsule with a diameter less than two millimeters was introduced to the writer by means of shot umbrella. Markov died a few days later.

In 1949 Mayranovsky was engaged in more ambitious projects. On the instructions of Beria had created the mechanisms of poisoning dusty poisonous substances that at a mass gathering of people was able to cause heavy casualties.

the Exact number of victims of experiments Mayranovskiy is difficult to determine. Historians call different numbers – from 150 to 300 people. KGB Colonel Vladimir Bobrenev, who had access to investigative Affairs Beria, argues that most of the victims were criminals, but among the dead were also German and Japanese POWs, citizens of Poland, Korea and China.

Pavel Sudoplatov, a former employee of the NKVD, wrote that the checks carried out under Khrushcheve, showed Mayranovsky and his group in the years 1937-1947 and in 1950 brought for the enforcement of the death penalty and the elimination of undesirable individuals by Express decision of the government.

Sudoplatov told of four cases, the elimination of “dangerous enemies” of the Soviet state, which took part Mayranovsky. The authenticity of these facts is confirmed by the fact that the operations involved and Sudoplatov himself.
the Victims were: Alexander Shumsky is one of the leaders of the Ukrainian nationalist movement, Theodore Romzha — Archbishop of the Ukrainian Greek Catholic Church in Uzhhorod, Koh Samet is a Polish Jew, who established contacts with the British and intending to emigrate to Palestine, and Isaiah Oggins — American citizen who worked for the NKVD abroad and arrested on suspicion of double-dealing.

for example, To the liquidation of the revolutionary-nationalist Shumsky group Mayranovskiy was sent to Saratov. The agents soon left, and Shumsky ended up in the hospital, where, according to the official conclusion died of heart failure.

Sudoplatov suggests that Mayranovsky could be used in the elimination of Raoul Wallenberg. The Swedish diplomat, according to Sudoplatov, was transferred to spaccamela “Lab-X”, where he was given a lethal injection under the guise of treatment.

After the war Mayranovsky, together with two other members of the laboratory were sent to Germany for investigation of German experts in the field of toxic substances. However, the achievements of the Germans on the part of the poisons were much more modest than in the Soviet Union.

But in 1951, Mayranovsky, and a number of his colleagues were suddenly arrested on charges of official negligence, illegal possession of poisons and, worst of all, in the Zionist conspiracy to seize power and destroy the leaders of the state.

the interrogations chief specialist in poisons was very talkative and could not share their achievements. He spoke in detail about how actiotvuet a particular substance. According to Mayranovskiy, the most painful was the death from aconitine, which he poisoned ten people. “I have to say that I myself get scared when I remember all of it,” admitted the doctor-the sadist.

he Told how at a safe house eliminated the unwanted party people: mixed poisons in the food or beverage, and sometimes pre – “intoxicated person” killed by an injection.
Considering that it Mayranovskiy was closely connected to the NKVD (later MGB), he was considered in a closed meeting with the Minister of state security. For illegal storage of poisons and malpractice Mayranovskiy was sentenced to 10 years in prison.

Your doctor life faithfully spent in the Vladimir prison, however, tried to appeal to the authorities for commutation of sentence. Ironically, in the same prison had housed Nazi war criminal and fellow Soviet specialist, one of the most feared of doctors-experimenters Carl Clauberg Auschwitz.
After his release in 1962 Mayranovsky moved to Makhachkala, where until the end of his days worked in a local research Institute. In 1964, “Dr. death” died. The diagnosis is predictable: congestive heart failure.