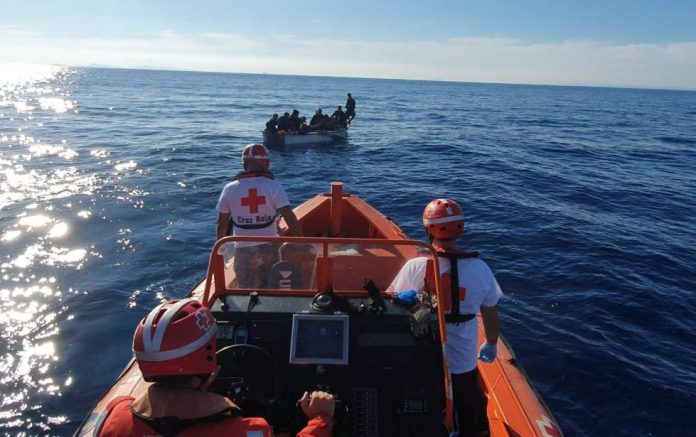 The game of algerians ‘without papers’ to Europe lays bare the weakness of the regime, The revolt algerian recovers momentum with a massive protest in the capital

The increase of traffic on the route connects Algeria with the Spanish coast, is a new concern for the european authorities. “Taking into account the seasonal pattern of this nationality in particular, it is likely that the increase will continue and measures should be taken”, says an internal report of the European Commission drawn up in October. While irregular entries have been reduced by around 50%, Algeria now appears as an open front.

The vast majority of irregular migrants arriving in Spain from Morocco, but a couple of months that the activity has moved to the neighboring country. September and October are marked in red on the calendar. “From January to the end of August 2019, 95% of the irregular migrants came from Morocco, while only 5% did so from Algeria,” explains the document dated the 15th of October. “However, in September and in October the number of arrivals from Algeria has achieved a 42% of the total”.

The emigration from Algeria to the coast of Murcia, the Balearic islands and in Alicante follow a seasonal pattern and, according to the analysis of Frontex, the european border agency, tends to increase from August to December. This year is, therefore, the trend of the past few exercises, but now the context is different. Irregular entries in Spain (27.208) have fallen to half in comparison with the same period of 2018, but the algerian case is accompanied the reduction. In September and October, arrivals from russia grew by almost 50% over the previous year, the report stresses, without specifying the nationality, or the total of those who embarked. “Although the algerian authorities have increased surveillance, criminal organizations show an increasing ability to adapt its modus operandi”, maintained internally analysts that report to the European Commission.

The increase of outputs from the coasts of algeria in a context of containment of the pressure of migration is explained, on the one hand, because a part of that before they would go out from Morocco now seek routes to less patrolled. The pressure exerted by the moroccan authorities, backed by more than 170 million euros from the EU and Spain, becoming harder to leave the country without being intercepted and returned. The continuous output of algerians, immersed in a crisis of State, explains the rest.

so far this year more than 2,500 algerians have managed to land in Spain. The arrivals remain at levels similar to those of 2018, the year with most records from the last decade (to more than 4,300, according to Frontex). Among the nationalities most common registered enter Spanish territory, this is the only one whose numbers have not dropped drastically. In actuality, they are the second most numerous nationality on board of the boats which arrive at Spanish coast, only after the moroccans. In 2018, according to Unhcr, as were the rooms.

The increase of the games coincides with an escalation of the repression in Algeria. Since the protests began against the regime, on the 22nd of February, the strong man of the country, the chief of staff of the Army, Ahmed Gaid Salah, has tightened the siege against the activists. Have been jailed journalists, protesters who were carrying the flag amazig, emblem berber that symbolizes the freedom, and leaders of opposition parties. Tens of thousands of algerians are still taking to the streets every Friday. But the discouragement has taken its toll on some young people. “It is true that there have been hundreds of candidates for irregular migration. But it is too early to advance conclusions. It is necessary to observe the long-term trend”, says the sociologist Zahir Hadibi.

Kouceila Zerguine, a lawyer specializing in migration issues, says that the emigration is due to two factors: “on the one hand there is the external factor, the migration policy of the EU. While there is an inequality between wild-the north and the south will continue to be migrants”. On the other, he adds, is the issue internal. “The people took to the streets to claim that they want to be owners of their future. The young people chanted in the demonstrations: ‘We do not leave the country, you (the powerful) who is iran’. But the regime has increased repression. And a lot of people have decided to try to leave again”. Although thousands of algerians have decided to cross the Mediterranean, others many want to stand up to power. “Regime change is not done from one day to another”, explains Zerguine. “It’s a race to the bottom. And there are those who prefer to fight here. I just saw in the street a graffiti on a wall that says: ‘we Prefer the revolution of the 22nd of February before you emigrate”.