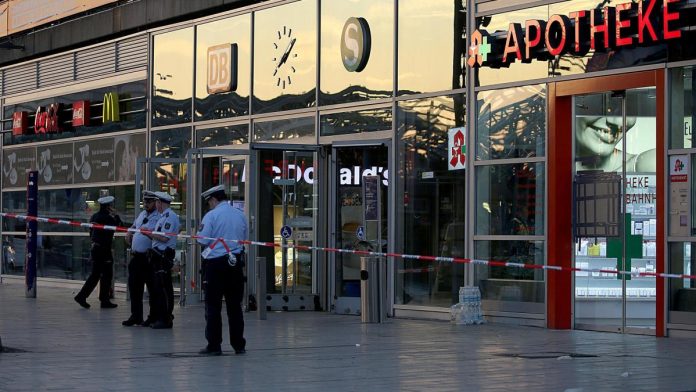 In the case of the hostage-taking of Cologne, was issued against the offender a warrant for attempted murder in two cases, and hostage-taking. The Cologne public Prosecutor stated during a press conference in the afternoon. It was assumed also that the Federal government would bar recording in Karlsruhe soon investigations.

A day after the violent crime, the police seized in a Cologne flat evidence, which will now be evaluated. The police had not ruled out on Monday evening that it was hostage to a stop. Is, however, that it was hostage to a random victim, said Klaus-Stephan Becker, head of the Cologne criminal investigation Department. Witnesses reported that the culprit had made an impression of neglect and “perceptible under the influence of alcohol”.

In the press conference in the afternoon, the police confirmed that the perpetrators of those 55-year-old Syrian, whose identification papers were found at the scene of the crime. This is living for 2015 in Germany and is recognised as entitled to Asylum. He was in the police force since 2016 because of several offences on record, including for theft, assault and Trespassing.

The hostage-taking in a pharmacy in the main train station had taken on Monday afternoon with a bloody end. Officers from a special task force shot down the perpetrators, as this was apparently lighting his female hostage. He was emergency surgery, is now out of danger and is in a coma. Therefore, he was not yet hearing is capable of. The son of the 55-questioned-Year-old, lives in Offenbach.

The perpetrator had thrown at noon on Monday, considerable quantities of Gas and petrol and to one or several Molotov cocktails in a fast food restaurant and then in the neighboring pharmacy with a employees have holed up. In fact, a youth and two women were injured. The young people suffered such severe burns that she needed surgery.

According to police sources said the man according to witnesses, the fact that he was a member of the “terrorist group Daesh”. This is the Arabic name for the jihadists militia Islamic state (IS).

Isolated impairment of the rail traffic

with an airsoft gun, accelerant and gas cartridges equipped hostage-takers have demanded the release of a Tunisian prison. The Prosecutor’s office investigating murder and attempted murder, hostage taking and grievous bodily harm.

After the hour-long full closure of the Cologne main train station, because of the hostage-taking of the railway traffic returned to normal on Tuesday again. S-trains and regional trains operated in the Morning largely to schedule, such as a railway spokeswoman in Duesseldorf said.

In the long-distance traffic there was, therefore, still a few drawbacks. From the five-hour full closure of the Cologne Central station during the police operation, several Hundred trains were affected.