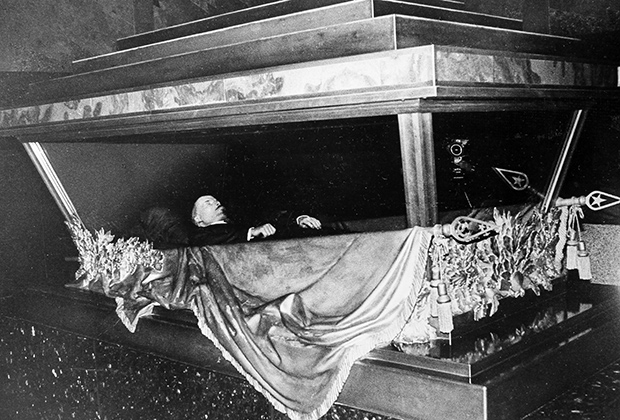 the body of the leader of world proletariat of Vladimir Lenin lies in the mausoleum on red square since 1924. Since that time, in the room of the tomb was the place acts of vandalism and even a terrorist attacks. Who did it and what was the purpose of criminals?

19 March 1934 one of the visitors of the mausoleum brought to the premises of the firearms from which he tried to shoot at the body of Lenin. But vigilant guard on time figured out it, drawing attention to his suspicious behavior. Realizing that he exposed, the avenger had committed suicide. During the search of the body there were found documents in the name of Mitrofan Mikhailovich Nikitin, a worker near Moscow state farm “Progress”. It turned out that Nikitin was an ardent counter-revolutionary and hated Lenin. In the suicide note, the farmer said that the country “to roll into the abyss” and that he “gladly die for the people.”

After the death of Stalin in 1953, its leader was also placed in the mausoleum. In November 1957, a Muscovite by the name of Romanov tried to douse the coffins of Lenin and Stalin ink. But to do so he failed.

In March 1959, an unknown man came to the mausoleum with a hammer and smashed the glass of the tomb of Lenin. The body of the deceased remained intact. No name, no name, nor any other data about the identity of the vandal has not been preserved.

In July 1960, a native of Kyrgyzstan Minibaev someone kicked the sarcophagus of Lenin so that the broken glass has damaged the embalmed body. After that, the mausoleum was closed for a month for restoration work. Minibaev was arrested. He admitted that the plan to destroy the glass coffin he has matured 11 years ago.

In April 1962, a pensioner from the Moscow region by the name of buttercups tried to break the glass tomb at pomosoup of ordinary stone. But the sarcophagus stood. Later, investigators found out that buttercups are regularly sent letters of anti-Soviet content in various media and the Embassy.

One of the first explosions in the mausoleum occurred in the fall of 1967. In that year a Lithuanian by the name Krysanov (according to others, Krasenkow) arrived in Moscow from Vilnius (according to others, from Kaunas). Today, the media dubbed the bad guy by a suicide bomber, because Krysanov, oposals homemade explosives, blew himself up at the entrance of the mausoleum. However, from the actions of an attacker suffered and other people, who at the time were in the area. The most seriously injured was a tourist from Italy, who lost her legs. Presumably, the main purpose Krysanova was the destruction of the tomb along with the body of Lenin. Lithuanian was considered insane.

in 1973. Identity cannot be established

September 1, 1973, in the mausoleum, an explosion occurred. A man, standing as close to the sarcophagus detonated a powerful deadly device hidden under his cloak. At that moment the hall was attended by quite a lot of visitors, among whom were children. Two guests, who arrived in Moscow from Astrakhan, was killed on the spot. Other spectators, school children and security personnel were injured varying degrees of severity. One person died in the hospital. The sarcophagus, which, apparently, was the main object of attack, was not injured, as in the 1960-ies after many attempts on the dead leader, he was covered with a heavy-duty glass shell. From the criminal only in one arm and a fragment of the head. To establish the identity of the terrorists failed.