Home Breaking How white fought in tanks in the Civil war 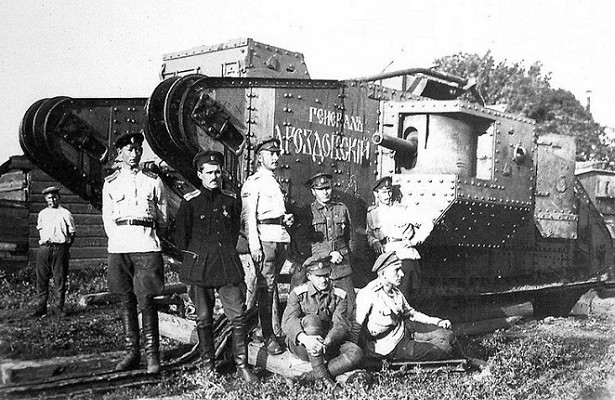 In the First world war Russia had tanks. Russian engineers have developed several projects of tanks, but in production they never went. At the end of World war I, Britain and France, possessing the large reserves of these machines, began exporting them to various countries. Put around a hundred pieces and the white armies in Russia.

the world’s First tanks appeared on the battlefields in 1916-1917, were very slow and with very little reserve. They were delivered to the battle on railway platforms. On their own they could not move a large distance. Therefore, in Russia, their military use was limited only to areas immediately adjacent to Railways. Tanks of the time did not serve as an independent means of quick breakthrough. They could only attack with the infantry storming fortified enemy positions. However, their armor was not strength, and they became an easy target well ready field artillery and heavy machine guns. Was weak and their weapons, only machine guns. A few models of tanks carried guns.

the White guard armies were supplied main at the time the battle of England (MkV and MkA) and France (Renault FT-17). The MkV was considered a heavy tank. He carried two 57-mm cannon and 4 machine guns or (in another version) 6 machine guns. The crew consisted of 8 people. The car developed a speed of only up to 8 km/h and had a power reserve of 72 km, was the MkA medium tank with a crew of three and armament of three or four machine guns, a top speed of 13.5 km/h and could go without refueling more than 100 km. Renault FT-17 was a light tank with a crew of two, armed with one gun or one machine gun, moving with a maximum speed of 8 km/h and a maximum distance of 35 km.

most of a tankin (mostly MkV) was supplied to the army of South Russia under the command of General A. I. Denikin – over 70 pieces. In Ekaterinodar with the help of British experts Denikin in 1919 organized the first in Russia school of officers-tank. 20 tanks arrived to Odessa together with the French invaders, 6 (according to other sources, 9) machines were in the army of General N. N. Yudenich near Petrograd, 4 or 5 – the troops of the interventionists in the North of Russia. 10 tanks were delivered to the army of A. V. Kolchak, but they arrived after the fall of the Supreme ruler and went straight to red.

For the above reasons the use of tanks in the Russian Civil war was very limited. However, sometimes the tanks have rendered the whites great service. So, in June of 1919, when the assault fortified positions red to the South of Tsaritsyn appearance on the battlefield 17 tanks MkV and MkA played, as noted by General P. N. Wrangel and some other important role. If in 1918 the white three times unsuccessfully attacked Tsaritsyn, this time the city was taken.

Because the tanks could not evacuate on their own, but a Civil war unlike the First world was maneuverable, during the retreat, they had usually quit. So, in the spring of 1919, the Bolsheviks seized near Odessa from the invaders four tanks of “Reno”. On their basis the plant “Red Sormova” in Nizhny Novgorod in 1920 began production of the first domestic tanks. 31 Aug 1920 tank MS-1 representing an improvement on the “Reno” (weapons – guns and machine guns, speeds of up to 17 km/h, range 120 km) was adopted for the red army. However, to take part in battles he never had.

captured Serviceable vehicles coming into service of the red Army during the Civil war. For example, two of the captured near Odessa four tanks fought in the armored division special purpose at the people’s Commissars of the Ukrainian SSR. During the retreat of the whites in the South of Russia only in Taganrog red captured 19 Mashan and Novorossiysk – 18. In the spring of 1920 in the same Ekaterinodar was organized by the now Soviet courses for red commanders-tank. At the same time was approved the first staffing armored units of the red army. Thus, not only white, but also red used tanks during the Civil war. The effect of their use, however, because of the nature of theatre and the nature of the fighting was insignificant.

One of the most famous battles of the Civil war, vividly showed the limitations of the combat capabilities of the then tanks occurred near Kakhovka in Ukraine. Here during the counterattack of the red Army in August 1920, formed the bridgehead on the left Bank of the Dnieper. He wedged like a splinter in the location of the white army of Wrangel, and white has repeatedly tried to eliminate it. The major offensive was undertaken on 14 October 1920.

that day the troops of the 2nd army corps under the command of Lieutenant General V. K. Witkowski attacked the fortified positions of the red, prepared under the leadership of the military engineer Lieutenant-Colonel of the tsarist army, later Soviet General Dmitry Karbyshev. Participated in the battle of 12 tanks. Soviet units missed them using their own rules, machine-gun fire cut off from their infantry, repelled her attack, and then dealt with the tanks. Red defended the Kakhovka bridgehead, soon played an important role in the final defeat of Wrangel’s army.

Separate tanks captured by the red Army from the white guards and interventionists, were installed on pedestals and are still in Arkhangelsk, Kharkov and Lugansk. One MkV is an exhibit tank Museum in Kubinka. “Russian Renault” at the Sormovo plant in Nizhny Novgorod – just a mock-up of the said tank, manufactured in the 1970-ies.