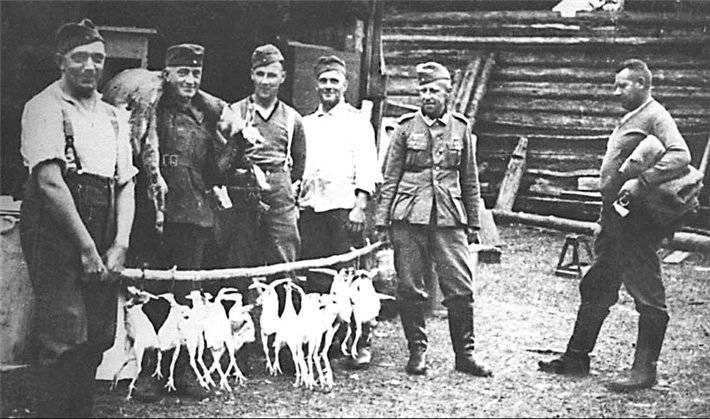 the Hungarian government officially recognized heroes of the soldiers and officers of his country, who fought in the great Patriotic war on the side of the Nazis. However, the veterans remember that the Hungarian connection sometimes is not inferior to the most notorious atrocities of the fascist thugs.

How and over whom they mocked

According to a memo to the head of the political Directorate of the Voronezh front General-Lieutenant Sergey Shatilov, in the Voronezh region “Hungarian lackeys” (Shatilov calls them “Magyars”) in 1942 noted “monstrous atrocities” against civilians and captured soldiers of the red army. So, they captured Lieutenant before the murder, slashed with a knife and seriously wounded political leader, was mutilated by cutting into the body of the star. For one of the peasants a few rounds, the man was shot. Girls and women in the occupied Voronezh villages, Hungarians were raped, and the working-age population, ranging from 13-year-olds and ending 80 years old, drove to the rear to perform various operations.

have committed Atrocities in Hungary and in the Bryansk region. The farmer Anton Krutikhin wrote in his testimony that in his village the Magyars shot everyone who did not manage to hide, and many girls and women raped. The Hungarians were stealing cattle from villages, looted homes. The woman, Barbara Materkova said, in her village the Hungarians burned alive in a potato pit almost 70 people, considering them as guerrillas.

Bryansk Deserted villages, where the inhabitants went into the forest, Magyars burned. If there were people killed – women, children and the elderly. According to a resident of the village Svetlova, they from the woods back from the ashes – the Hungarians were even hidden by the villagers in the pits things, stealing cows and sheep. According to the archives, only in three villages of the Sevsk district of the Bryansk region the Hungarians killed more than 400 residentsher.

“Vogelsang”: “Bird singing” and other operations

During this punitive campaign in Bryansk in 1942, Hungarian units murdered more than a thousand guerrillas, about a thousand wounded, 12 of thousands of civilians evicted from their villages. The Hungarians also participated in punitive operations “Nachbarhilfe” (“help the neighbors”), “Zigeunerbaron” (“the Gypsy Baron”), which in the Bryansk and Kursk regions in 1942 were killed and brutally tortured thousands of civilians, guerrillas.

According to reports of the command of the Voronezh front, winter of 1942 the 2nd Hungarian army of the red army routed. Nearly 150 thousand Hungarians laid down their lives, were wounded or captured. Most of the heavy military equipment, horses and ammunition near Voronezh Hungarians lost. It was the biggest defeat of the Magyar army for all time of its existence. Historians say that it is similar in scope to the Stalingrad the turning point – the Magyars have not been able to recover after it and before the end of the Second World Hungarian units did not pose a serious danger as ethnically unrelated links in the armies of the Wehrmacht.

the Atrocities of the Hungarian units were opened after liberation of the red army of Soviet settlements. So, according to the reports of commanders of the red Army, Chernyansky district, Kursk oblast in 1943, the Hungarians burned alive 360 prisoners of war and civilians. On a farm Kharchevka in the Kursk region, they are mutilated with bayonets, four soldiers and buried them alive in the ground. In Ostrogorski (Voronezh region) the local resident witnessed the horrific atrocities performed on prisoners of war: the Hungarians were burned at the stake, and then stabbed with a bayonet.

According to Soviet archives, the great Patriotic war killed about 300 thousand Hungarian troops, more than half a million were captured. In 1950, he issued secret orders concerning the repatriation of Romanians and Hungarians. ACCObut this document, the USSR Ministry of internal Affairs was ordered to carefully check the prisoners for their participation in the punitive actions during the war. Hundreds of Hungarians after checking, was convicted and sent to camps, and many of them received death sentences.