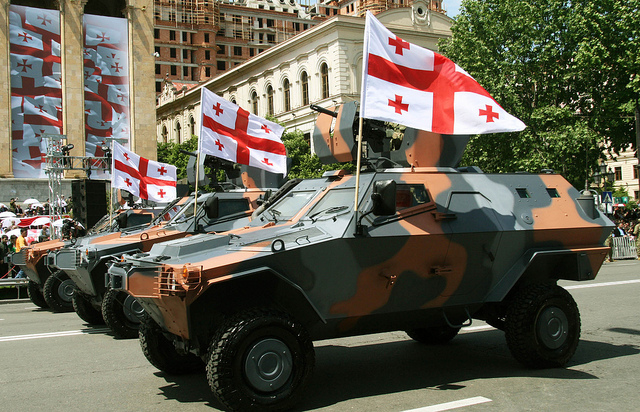 the August 2008 war with Georgia became one of the most notable events of the presidency of Dmitry Medvedev. According to the official Russian version, the reason for the conflict was the Georgian attack on South Ossetia. Georgian military immediately after start of the operation said that they wanted to “stop shooting”, leading from the side of Tskhinvali, in the Georgian villages. What actually provoked the war?

According to the Russian version, the purpose of the government of Mikheil Saakashvili was to completely destroy the unrecognized Republic on the former territory of the Georgian SSR, using the fact that the world’s attention is riveted to the Olympic games in Beijing. The case could reach the ethnic cleansing in particular, said the President of South Ossetia Eduard Kokoity.

Invasion of the 58th army of the Russian Federation, which began after the murder of the Russian peacekeepers, in fact, saved the Ossetians from genocide, or, at least, from a loss of independence.

According to representatives of Abkhazia, Georgians were planning to parachute in Sukhumi, at the same time and started advancing towards the city through the Kodori gorge, after destroying Abkhaz armed units.

According to the magazine Spiegel, on the morning of 7 August, the Georgians concentrated on the borders of the unrecognized Republic of South Ossetia the group of 12 thousand people and 75 tanks.

If the authorities of Georgia is really planning such action, they relied on a good historical precedent — operation “Lightning” and “Storm” in the former Yugoslavia. In 1995 Croatia was liquidated on its territory of the Republic of Serbian Krajina that had existed for 4 years. Hostilities ended with the Exodus of Serbs from Croatia.

According to the alternative group version, the war was a deliberate action of Russia, prepared, probably, not one year. PrezIdent of Georgia Mikhail Saakashvili has stated that after the violation of the cease fire from the Ossetian forces had immediately followed the invasion of Russian troops. In 2009, the authorities in Tbilisi have even provided declassified data radio intercepts indicating that Russian armored vehicles had entered the Roki tunnel that morning on 7 August. This caused confusion among the South Ossetian border guards, who, after consultation with the authorities not to interfere with the Russian military.

President Mikheil Saakashvili has started the countdown of “Russian aggression” from the moment when the Russian Navy ships have left the base in Sevastopol and moved to the South-East — this happened 6 days before the war.

the Russian Goal, according to supporters of this version, was a complete takeover of Georgia, the overthrow of the government in Tbilisi, who came to power after the “rose revolution” and the dismemberment of the country and to prevent it in NATO.

However, in the first hours of the conflict, the Georgians did not mention about any Russian intervention. The commander of Georgian peacekeepers Mamuka Kurashvili General claimed the TV channel “Rustavi-2” that “the Georgian power structures” after the failure of negotiations, decided to restore “constitutional order” in Tskhinvali region. This statement of the Russian media aired in the early morning of 8 August. In addition, at the time of the collision Kurashvili has kept in touch with Russian peacekeepers, who warned against intervention in the situation. It is noteworthy that subsequently the General for his words was reprimanded by the top leadership of Georgia.

Finally, yet another version, voiced by, in particular, the former speaker of the Russian Duma Boris Gryzlov, is that Georgia is urged on to the aggression of the neo-conservatives of the us Republican party, headed by Vice-President Dick Cheney. Their goal was to start a “cold war” with Russia in the media in order to add points in the race for their candidate — Senator John MAKanu, which eventually in November 2008 and lost to Barack Obama.

Note that South Ossetia and Abkhazia, unlike Crimea, was not included in the part of Russia, and their political future remains uncertain.