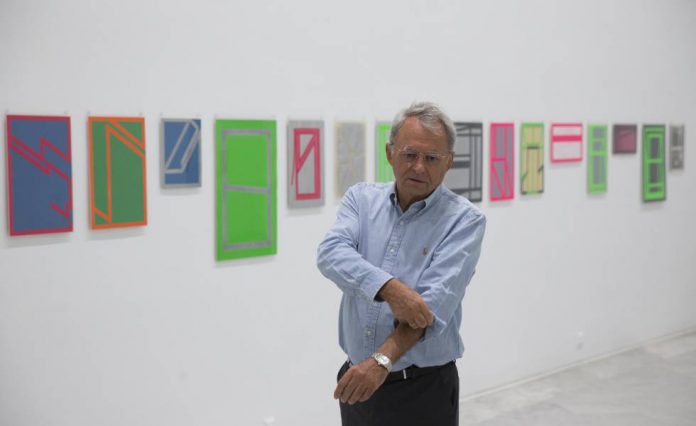 The curiosity, the same that drove him from child to paint and to be seduced by the news that arrived to his city, The Port of Santa Maria, at the beginning of the fifties with the construction of the Naval Base of Rota, has marked the retrospective of Juan Suárez in the Centro Andaluz de Arte Contemporáneo (CAAC). “During my career I have designed, assembled and curated many exhibitions, even collaborating with the architectural firm that designed the Spanish Museum of Contemporary Art in Madrid, so it had a huge curiosity to see how to mount my work to a professional stranger to me, and I hardly ever intervened in the exhibition,” said John Suarez, the port 73 years old, and one of the creators who burst with force in the decade of the seventies, with abstraction as a flag.

“I have to recognize that I had made a selection mediated by the architecture, but the result is fantastic and, despite the fact that we have had to do without many parts, I’m very interested in the vision of the other”. The other, in this case, it is Juan Antonio Álvarez Reyes, director of the CAAC and curator of the retrospective, Juan Suárez. Time and time again, that can be seen in the Monastery —the seat of the centre in seville— until 9 February 2022 and brings together some 80 works between painting and sculpture.

The selection begins in 1966, with several of the boxes monochrome that showed in his first solo exhibition in the gallery, The Gateway, and ends with a large sculpture made this year ex profeso for the shows time and again, a work of lacquered wood consists of four trapezoids that gives title to the exhibition. “In reality it is the development of some canvases, 1982, that have been posted in this same room, and that already contained these forms. The title is inspired by the Time after Time miles Davis, although the song is not yours. Are irregular shapes, but which are governed by an order”, explains the artist, who moved to Seville to study Architecture, a discipline that has always marked his work, although he left the race after four years and switched to Fine Arts.

‘The glow of the saints’, by Juan Suarez, in the CAAC. alejandro ruesga

The music, the literature, and, above all, large of the history of art as disparate as Mategna, Caravaggio or Barnett Newman feed the insatiable curiosity of an artist who, he says, has never thought of the significance of his work. “I’ve always worked and painted because I love it. I am very skeptical about my work, very demanding with myself and I am never satisfied with the result,” says Juan Suarez, who, in the seventies, championed abstraction in the shelter of the defunct gallery The Walkway along to the architects and painters José Ramón Sierra and Gerardo Delgado. A generation later, he became the gallery of Juana de Aizpuru, who worked in Seville from 1970 to 2004.

“Everything in life is subject to a geometry very concrete. The situation of each with respect to others, in life, in relationships, at work… that is what I express in my work, the geometry is controlled, but also the uncontrolled that appears and distorts the plane. An order to destroy to get to the chaos,” he says. The artist goes to a quote from the novel On the road, by Jack Kerouac, “I didn’t know where to go except everywhere”, to express the importance of the randomness in their production as well as in the work ECO, inspired by the music of John Cage, which is made up of many pieces of different colors whose placement in terms of distance from each other, and order is determined by a series of rolls of the dice. That is to say, the chaos within order, or vice versa, as preached by the artist.