Home Breaking Kazan “the Black cat”: what did the most dangerous criminals 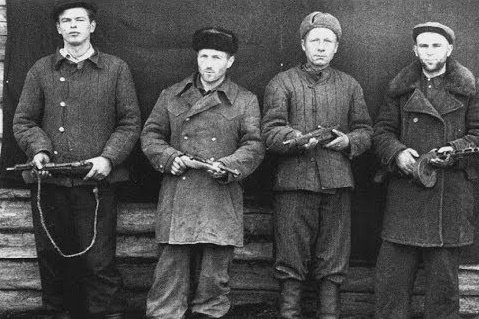 Crime 29/01/20 Kazan “the Black cat”: what did the most dangerous criminals

After the great Patriotic war, the streets of Soviet cities were flooded with gangs of robbers and murderers, who as a blueprint was called “the Black cat”. One of the most violent groups with the same name, not schadivshie neither old men, children, acted in Kazan.

In 1945 in the capital of Tatarstan began to find corpses with gouged eyes. The victim of fanatics could become almost any person, regardless of gender and age. Criminals interested in profit, and they especially loved to kill the sleeping. For example, the private home of a collector Dmitry Popandopulo bandits came through the tunnel. Through the cellar three of the raiders climbed up to the kitchen and massacred almost the entire family – the owner with his wife, his 70-year-old mother-in-law and two daughters 8 and 6 years old. Managed to survive only 3-year-old girl smashes head on the corner of the furnace (the child was disabled).

Several times the police tried to detain suspicious men in hot pursuit, or just to check documents, but these attempts ended with the death guards. The bandits fired back with handguns. Vowing to avenge the death of colleagues, the investigators of Department on struggle against gangsterism took over the questioning of witnesses. It turned out that the alleged ringleader — a person is quite remarkable. Many gave the young man a former soldier and great weapons, and uniforms. Was and special sign – offender squinting in his right eye.

during the search for the suspects, volumes of the criminal case grew. The gang robbed a warehouse of the tuberculosis hospital and the base of the “Voentorg”. Another victim was the cashier of the factory “Flame” Maria Ivanycheva, which the raiders ambushed from the state Bank. From the portfolio the dead women they kidnapped 20 thousand rubles..

In 1948 the police were staking out the apartment where had to be criminals.

“a lantern Illuminating the room, the leader noticed dressed in a blue police uniform security officer CID Alexei Machine and heard the sound of a platoon of them the trigger of his revolver. “Godfather” managed to warn accomplices: “Here you bastards!” Shots rang out, injuring those others, but the robbers managed to get away from the chase”, — is told in article of candidate of legal Sciences Maxim Belyaev.

the Incident forced the bandits to “lay low”. Moreover, they are so brazen that they began to knock on doors Kazantsev, wearing a police uniform. The family home Kashafutdinova imaginary “law enforcement officers” killed three people, and one of the victims – a young girl – the leader personally raped, then beaten with a hammer.

the hard work of the investigators has borne fruit only in 1949. Revealed that robbed the plant “Banner” worked previously convicted Peter Petelin. Set him observation allowed to go to his two close friends. Vasily Korsakov suffering from strabismus and worked as a security guard at accordion factory, perfect like described leader of the gang. With him I was always talking juvenile Aleksey Babayev. The young people were nicknamed “Rooster”, “Feed” and “Blum”. During interrogations the leader did not lock up and confessed to all the crimes. It turned out that Kormakov engaged in theft of 11 years and had a wide acquaintance in the underworld. Improvised active three had almost 2 dozen people, including their close relatives. All victims of “Black cats” there are 22 residents of Kazan, including 3 policemen and one soldier of the red Army. Kormakova, Petelin Babayev and the verdict of the court was shot in 1951. Other criminals have received from 15 to 25 years of camps.