Home Breaking Nokmim: how Jewish “the Avengers” kill the Nazis after the war 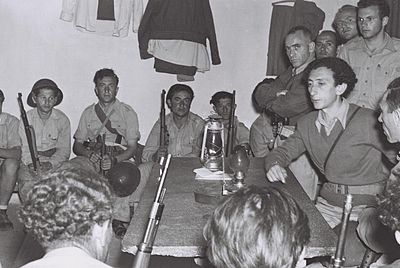 History 22/03/20 Nokmim: how Jewish “the Avengers” kill the Nazis after the war

After the war, part of the Nazi apparatus was recognized more than 13 million people. Of them detained were 3.5 million, but 2.5 was released without trial. And those who still were under arrest, were fined, the confiscation of property, prohibition to hold public office for a specified period of time. By 1949, only 300 Nazis was serving serious time in prison.
This state of Affairs, many who passed through the concentration camps, were perceived as an insult. The allies were justified by the fact that the process would become endless, and in prison turned out to be a significant part of the adult population of Germany.

Jewish blood will be avenged

a Group of young Jews did not want to accept the fact that the people responsible for the tragedy of their people, will not suffer any or any serious punishment. In the spring of 1945 in Bucharest they have the Nokmim (“the Avengers”). Its ideologist and leader was Abba Kovner. During the war he was a prisoner of the Vilnius ghetto, organized in this underground movement, and after the liquidation of the ghetto, gathered a Jewish partisan unit.
At the meeting, devoted to the Passover, he quoted Psalm in which the Lord promises punishment to the enemies of the Jewish people: “He will repay them for their wickedness and destroy them for their malice.”
Not all of those who entered the Nokmim were prisoners of concentration camps. Some of them fought in the Jewish brigade – a special formation of the British army, created in September 1944, the Brigade consisted of volunteers-Jews from different countries had the logo and the banner. In the summer of 1945 the leaders of the Nokmim moved from Romania to Italy, at Tarvisio, where they were placed the brigade. Apparently, this is where the organization and welcomed new members.
Soldiers of the Jewish brigade in the Nokmim was irreplaceable – their status was allowed to move freely in EEurope, to obtain information about places of residence and occupation of the Nazis, to take a car service.
the Exact number of members of the Nokmim and their names are not known until now – the organization was well disguised. Some sources say that “the Avengers” was about 60 people, among them Israel Carmi, Eliezer Lidovskaya, Chaim Lazar, Mordechai Gihon, Nissan Reznik.

Journalist Michael Elkins, who wrote about the “Avengers” book, called the most successful period of their activities. He lasted almost two decades.
members of the Nokmim were hunting their victims around the world – from Europe to South America. They often depicted a fictitious arrest, taking the Nazis out of their homes. In one interview, the participant Nokmim said that the Nazis put into the body, taken to the woods, where he was questioned for over an hour. Then asked a rhetorical question: what deserves criminal? After that the victims were killed.
But most former Nazis have been “accidents” or they “committed suicide.” One of these “suicide” was Alexander Laak, accused of “Avengers” in the death of hundred of thousands of Jews in a concentration camp jägala (Estonia), the commandant of which he was. According to recent data, the death toll was much smaller – about 10 thousand.
After the war, Laak got canadian citizenship, changed his name to Alex Laak and peacefully lived on the outskirts of Winnipeg. One day in early September 1960, his wife went to the movies. Members of the Nokmim, watching the house, met with Laak and charged him. After that, they “suggested” to him a way out – he commits suicide himself or they kill him. Laak has been found hanged. The investigators came to the conclusion that it was suicide, but after the book Elkins, where was discussed about the case, the proceedings had been resumed.
the Nazi leaders died in hospitals after simple operations instead of medication in the dropper was kerosene. Others have been killed in car accidents. The third was found strangled to death or hanged.

the Punitive action carried out on the units did not satisfy the desire of the members of the Nokmim. They wanted to conduct a large-scale massacre, comparable to the number of victims of Nazi actions.
In 1946, the Nokmim targeted the Nuremberg camp Stalag-13, which contained 12 thousand former SS men. It was found out which bakery supplies the bread for the camp. It introduced Aryeh distela of a young blue-eyed blonde, do not cause suspicion. He got a job as a Baker’s helper. Deadly liquid held in the organization under the code name “the cure” Distel several days in a row sneaked into the bakery, hiding the bottles under the floorboards. On the appointed day three of “the Avengers” broke into the bakery and was filled with the poison of three thousand loaves.
the Newspaper “new York times” reported that on 20 April 1900 soldiers were poisoned with arsenic and was taken to hospital. In different sources in different ways refers to the number of victims. Some researchers States that killed about 400 people, while others write that all in time came to the hospital and survived.

All these actions were called the Nokmim “Plan B”. But there was a “Plan A”, which, in case of a successful outcome would be virtually the genocide of the Germans. “The Avengers” planned to poison the water in the five largest German cities: Weimar, Nuremberg, Munich, Hamburg and Berlin. They studied the plans for water pipelines and introduced people to the treatment plant. Nokmim to endanger those areas where the Germans lived, avoiding the locations of the American units.
had to get the poison. In his memoirs, former member of Nokmim Joseph Hartman wrote that poison gave them Chaim Weizmann, who later became President of Israel. Met Abba Kovner, at the end of 1945, secretly arrived in Palestine to get the approval of Ben Gurion. But he was opposed to the idea of killing millions of Germans and said that the punishment for them would work on the construction of Israel’s independence. And Veuzman, a chemist by training, learning about the horrors of the Holocaust, agreed to give the poison. This version, however, deny many of the researchers.
Kovner with two canisters of poison went to Germany. But any information about this accident came to the British security services, or someone has issued Kovner was arrested by British military police and imprisoned in a Cairo jail. After his release in 1946 he moved to Palestine, arguing that the struggle for independence is more important than terror.
His example was followed by many members of the Nokmim. However, the point the extermination of the Nazis lasted for a long time.