Home Breaking Operation “Lentil”: a terrible crime of Stalin against the Chechens 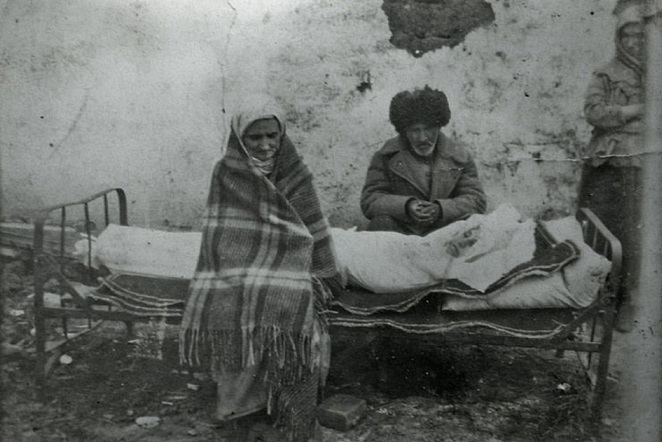 History 20/03/20 Operation “Lentil”: a terrible crime of Stalin against the Chechens

on the night of 24 February 1944 began the operation “Chechevitsa” – the mass expulsion of the Chechens and Ingush from the North Caucasus, which has become one of the most serious crimes of the Stalinist regime.

Before 1938, the Chechens into the army systematically called annual appeal was no more than 300-400 people. In 1938 the call was significantly increased. In 1940-41 it was conducted in full accordance with the law “On universal military duty”, but the results were disappointing. During the additional mobilization in October 1941 of persons born in 1922 from 4733 recruits shied away from the turnout at the recruiting station 362. According to the decision of t-bills in the period from December 1941 to January 1942 the CHI ASSR of the indigenous population was formed by the 114 national division. By the end of March 1942 it was time to jump 850 people. The second mass mobilization of the Chechen-Ingush began on 17 March 1942 and was completed the 25th. The number of persons subject to mobilization, was 14577 people. However to the appointed term had been mobilized only 4887 of them sent to military units is only 4395, i.e. 30% of the position under the order. In this regard, the mobilization period was extended until April 5, but the number increased only mobilized to 5543 people.

the Policy of the Soviet authorities, especially the collectivization of agriculture, had caused widespread discontent in the North Caucasus, which has repeatedly led to armed uprising.

Since the establishment of Soviet power in the North Caucasus until the beginning of the great Patriotic war on the territory of the Chechen-Ingush Republic took place on 12 major anti-Soviet armed performances, which were attended by from 500 to 5000 people.

But to say, as many years was in the party and checkistskogo documents about the “almost universal participation” of the Chechens and Ingush anti-Soviet gangs, of course, is absolutely groundless.

In January 1942, was established the “Special party of Caucasian brothers” (OPKB), brings together representatives of 11 of peoples of the Caucasus (but operating mainly in the Chechen-Ingush Republic).

In the policy documents OPKB the aim of fighting “Bolshevik barbarism and Russian despotism.” The emblem of the party was a picture of the fighters for the liberation of the Caucasus, one of whom was struck by a poisonous snake and the other a sword cut the throat of the pig.

According to the NKVD, the size of the organization has reached five thousand people. Another major anti-Soviet forces on the territory of the Chechen-Ingush Republic was established in November 1941, the Chechen-mountaineer national-socialist underground organization (CNCPO) under the leadership of Mr mayrbek Sheripov. Before the war Sheripov was Chairman of Leprosula CHI ASSR, in the autumn of 1941, he spoke against the Soviets and managed to unite under his command the troops operating on the territory of Shatoi, Cheberloevsky and parts of the Itum-Kale districts.

In the first half of 1942, the Sheripov wrote a program CHNSO, in which he expounded its ideological platform, goals and objectives. The mayrbek Sheripov, like Israilov, claimed to be an ideological fighter against the Soviet regime and the Russian despotism. But in the circle of his family he made no secret that he is motivated by pragmatic calculations, and the ideals of the struggle for freedom in the Caucasus have only a declarative character. Before his departure to the mountains Sharipov openly told his supporters: “My brother, Aslanbek Sheripov, in 1917, foresaw the overthrow of the king, therefore, was to fight on the side of the Bolsheviks. I also know that the Soviet authorities came to an end, so I want to go towards Germany.”

on the night of 24 February 1944, NKVD troops surrounded the tankmi and truck settlements, blocking all the exits. Beria reported to Stalin about the beginning of the operation “Chechevitsa”.

the Relocation began at dawn on February 23. By lunchtime more than 90 thousand people were planted in the freight cars. As reported by Beria, there was almost no resistance, and if it does occur, the instigators were shot on the spot.

February 25, Beria sent a new message: “Deportation is fine.” 352 thousand 647 people plunged to 86 trains and were sent to the destination. Chechens who fled to the forest or to the mountains, were captured by NKVD troops and had been shot. During this operation it was a terrible scene. Residents of the aul of Haibach security officers were herded into stables and burned. More than 700 people were burned alive. Settlers were allowed to take 500 pounds of cargo per family.

the Settlers had to take the cattle and corn in exchange they received cattle and grain from the local authorities to the new place of residence. Each car was 45 people (for comparison – Germans at deportation were allowed to take a ton of property, and in the car was for 40 people without personal belongings). Party nomenclature and the Muslim elite were driving the last train, which consisted of normal cars.

a Clear inflection Stalin’s action today is obvious. Thousands of Chechens and Ingush lost their lives at the front, was recognized for military exploits orders and medals. Heavy Khanpasha Nuradilov was posthumously awarded the title Hero of the Soviet Union. To the Elbe reached the Chechen-Ingush cavalry regiment under the command of major visaitova. The title of Hero to which he was introduced, he was awarded only in 1989.

Sniper-Chechen Akhmad Magomadov became famous in the battles of Leningrad, where he was named “fighter of the German occupation”. On its account more than 90 of the Germans.

Khanpasha Nradilov on the fronts destroyed 920 Nazis, captured 7 machine guns of the enemy and personally captured 12 Nazis. For military exploits Nuradilov was awarded the order of the red Star, the red banner. In April 1943, he was posthumously awarded the title Hero of the Soviet Union. During the war, 10 of vaynakhs became heroes of the Soviet Union. The war killed 2,300 Chechens and Ingush. Note: soldiers – the Chechens and Ingush, representatives of other repressed in 1944, the peoples spoke to the front in the labor army, and at the end of the war, they, “victorious soldiers” were sent into exile.

the attitude of the settlers in 1944-1945, at the places of settlement and work was difficult and was characterized by injustice and numerous violations of their rights by local authorities. These violations were expressed in relation to payroll, refuse to issue awards for your work. Work to improve the economic system was hampered by bureaucratic delays. According to the North Kazakhstan regional Department of jesuscristo on January 1, 1946 in the number of special settlers from the North Caucasus: “Chechen families 3637, or 14766, families Ingush 1234, or 5366 people, all families of special settlers in the area was 4871, 20132 or person.

In 1957, the peoples of the North Caucasus were able to return home. The return took place in difficult conditions, to give the house and the farm “old-timers” would not all. And then there were armed clashes. Forced relocation of the Chechens and Ingush caused them not only huge human and material losses, but also had a negative impact on the national consciousness of these peoples. You can say that the deportation of 1944 was one of the causes of the Chechen wars.

Recommended statesalaska Under… Elitsa: Comments Comments on the article “Operation “Lentil”: a terrible crime of Stalin against the Chechens” Please log in to leave a comment! br>
Share on Tumblr