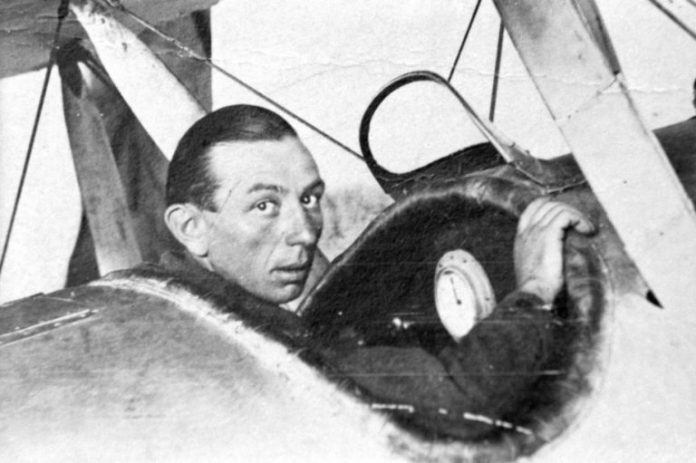 the Italian Primo Gibelli, posthumously awarded in December 1936 the title of hero of the Soviet Union became one of the first foreigners, whose merits before the Soviet Union was awarded with this high award.
a prototype of the hero of the film “Courage” test pilot Primo, though not been irreproachable discipline, but was deeply ideological, brave and a gambler.

Primo Gibelli was born in Milan where his father had a small carpentry workshop. But at the age of 12 years old he was sent to relatives in the French town of besançon, for primary education.
Returning with the Luggage pervoosnovnoe knowledge, he began to help the parent in the family business, attending evening technical school, which he attended with great enthusiasm. Realizing that this is his path, Primo left carpentry and got a job as a test engines at the factory “Fiat”.

Imponere left political forces, Cibelli decided to become an active member of the Socialist Youth Federation, where he met the future founder of the Communist party of Italy Antonio Gramsci. Openly advocate their political views, Primo the first time he was arrested for agitation against the Italian invasion of Libya.
Having an expert on aircraft engines a deferment, he avoided falling on the battlefields of the First World war, but for the organization antimilitaristic protests were arrested and sent to the army. However, to take part in hostilities, he could not, because by the time the war was finished.
after demobilization he Returned to the factory, he, encouraged by the victory of the Communists in Russia, continued to organize strikes, and in 1920 was fired and forced into hiding from persecution of the authorities.
Despite the intensifying terror of the state, Gibelli in the beginning of 1921 was among the first to join the Communist party of Italy, but when the government headed by Mussolini, began a direct persecution and destruction of the socialists.
the Only way to stay alive and not to betray the political ideals was emigration to the Soviet Union.

Voluntarily joining the ranks of the red army Primo before you start the actual service, was enrolled for training in the infantry school, after which he was sent to Ukraine. There he proved himself not only as a brave soldier, but a good technician, being able to revive the engine dvuhterabaytnogo armored cars, which were placed under his command. For significant assistance to the Soviet army in suppressing the Ukrainian gangs, Primo was thanked.

In 1922, fate brought Gibelli with aviation. Having trained in the Zaraisk Academy school of aviation, and completing it in Kachin aviation school, he was enrolled as a military pilot in the 1st aviation detachment of the red Army. As a pilot Primo served in stationed in the Ukraine squad “Lenin”, and in 1926 took part in aerial reconnaissance operations in the North Caucasus and Transcaucasia. One of these missions failed and the plane of Cibelli was shot down by opponents of the Soviet regime. However, once captured, he did not despair, and catch a convenient moment, powersil escape, stole a plane from the enemy English military Advisor. For this heroic act he was awarded the order of the red banner.
two years Later, Primo was awarded with the nominal weapon for the rescue from the waters of the sea of Azov bestowable fishermen, and in 1933, as the staff of the research Institute of the air force, decided to repeat the Chkalovsky flight under the bridge. But the attempt was not successful: not calculating the options he crashed into a support crossing the Moscow river, broke the airplane, received injuries and was dismissed from the red army.

Once out of the military system, Primo, first began to repair the engines, and then settled at the Moscow automobile plant. However, in September 1936, the 42-year-old test pilot decided to interrupt the quiet course of life, and volunteered in the ensuing Civil war in Spain.
of the 1st international bomber squadron pilot of Gibelli, who used the nickname “Caldero” fought against the troops of General Franco, defending the interests of the Republican government of Spain.
First, brave Primo had to fly on a legacy twin light bomber “Breguet 19”, and after his serious injury skillful pilot moved in the cockpit of a French “Potez 54”.
Showing in aerial combat bravery and professionalism, he successfully smashed the German fighter “Heinkel Not.51” and evading anti-aircraft fire of Franco.
But on 10 November, the tide has turned against Primo – on approach to Madrid, near the city Alcorcon, when the job runs, his aircraft was hit by anti-aircraft artillery.

Despite the fact that Primo was able to eject from the burning plane and open the parachute, the wind sent him to the camp of the enemies, namely one of the divisions of Franco. Seriously wounded soldier was immediately taken prisoner, and the next day aboard one of the fighters of the German Legion “Condor” during the air RAID on the position of the Republicans was to throw on a parachute canvas bag.
after Unpacking his colleagues of Soviet pilot was found chopped with an axe into small pieces the body of Primo Gibelli and a note: “So will every foreigner.” A later forensic examination revealed that brave pilot was brutally dismembered when he was still alive.

Moroccan troops Franco was an army of 90 thousand North Africans, who took an active part in the Civil war in Spain.
a Significant part of his career led the colonYelnya troops in Spain controlled Morocco, Franco knew that the Moroccans differ in battle notorious cruelty and fanaticism.
Attracting them to fight the ideological enemy, the General-nationalist completely justified counting on the fact that practice Islam Moroccans will not stand on ceremony and be sorry for the Spaniards-Christians.
where has gone before punitive Moroccan units, there has been looting, pillaging, mass murder and rape of civilians.
Of the most prominent representatives of this contingent was formed the personal escort of Franco, called “Moroccan guard”, are the same during the Second World war provided the “Blue division” that fought on the Eastern front against the Soviet troops.