Home Breaking Putin has set the task to minimize losses from the spread of... 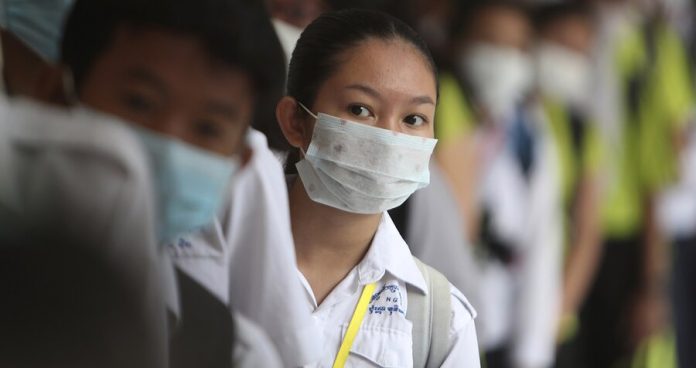 Vladimir Putin has set the task to minimize human losses from the spread of pneumonia caused by a coronavirus. He stated this at a meeting on measures to prevent the spread of the disease in Russia.

“in Almost all countries of the world, including in our country, every year we lose people from pneumonia and influenza, so here we have the common goal is to minimize these losses, to make everything that we have anything similar was not” – quotes the President TASS.

He noticed that the specificity of the spreading coronavirus in the novelty of this phenomenon.

“I believe that the government, Ministry of health, the CPS will do anything to surprises that we face, no surprise to the vast majority of citizens that all was ready,” – said the head of state.

Deputy Prime Minister Tatiana Golikova noted that in the present cases of infection with the novel coronavirus in Russia is not detected. However, the risk of its penetration into the country, she added.

Golikova has reminded that the government in late December has taken steps to control the disease. This, in particular, strengthening the monitoring of the epidemiological situation and control at checkpoints on the border of Russia. In addition, exercising physicians in case of detection of this virus in patients. Issues for immediate isolation of persons with suspected disease.

Russia has identified 139 cases, but the diagnosis were not confirmed.

“But we must understand that though now we don’t have victims, nevertheless, the virus can enter the territory of Russia, since today is already 15 countries have registered the cases of the coronavirus,” concluded Deputy Prime Minister.

About six thousand people worldwide infected with the coronavirus

Earlier, Prime Minister of the Russian Federation Mikhail Mishustin, has approved the composition of the operational headquarters for the prevention of introduction and spreadtion of coronavirus in Russia. Became its Chairman Tatyana Golikova. The headquarters also included the head of Rospotrebnadzor, the head of the Federal service for veterinary and phytosanitary surveillance, the Ministers of transport and health, the Minister of emergency situations, representatives of the foreign Ministry, the foreign intelligence Service of the Russian Federation and the General Director of “Aeroflot”.

the Ministry of health of Russia has prepared a draft interim recommendations on the treatment of the disease. Capital management Rospotrebnadzor has made detailed instructions on how to act staff working with Chinese citizens.

Sergei Sobyanin said that in Moscow there will be an operational headquarters to coordinate the activities of municipal and Federal services. The mayor took the situation under his personal control.

the Test system for the diagnosis of coronavirus arrive in the capital of the Novosibirsk scientific center of Virology without restriction. At substations of ambulance will be working with the Chinese translators and interpreters.

the Virus began to spread from Wuhan city in the end of December. According to the State Commission of health of the PRC, a new virus in China infected 5 999 people, of whom 132 died. Tracked 65 537 contact persons 59 990 are under surveillance. The world health organization declared the outbreak a national emergency for China and sent a number of specialists.

the Chinese authorities believe the peak of the outbreak will start in 7-10 days. Expert SMRC DRF of Ministry of health of Russia Vladimir closets believes that in Russia the disease may come in February.

China gave Russia the genome of the coronavirus. This allowed Russian scientists to create rapid tests for identification of the virus in the human body. The parties shall jointly develop a vaccine.

the judge said the protect medical mask from all boleznyami fakes: as coronavirus earn pharmacies and chipout bloggers content: the Coronavirus in China