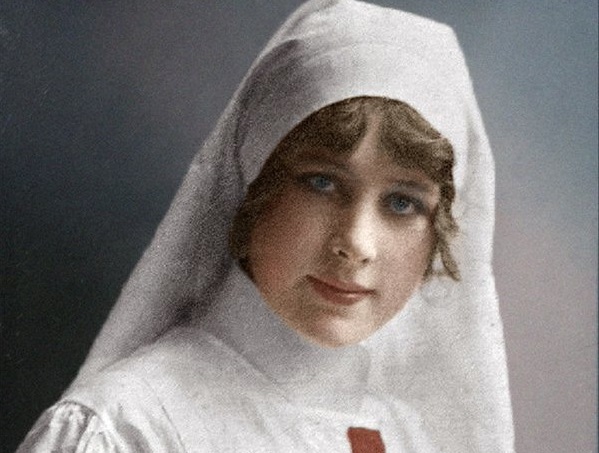 Rimma Mikhailovna Ivanova was born 15 Jun 1894 in Stavropol in the family of a priest. Her character was a Christian of a meek, but extremely strong and sacrificial. The girl always rushed to the aid of those who needed it, that Christian charity was the joy and light of her life.

When Rima was 6 years old, she enrolled in Olginskaya female gymnasium. She studied successfully and enjoyed universal sympathy.

on the Eve of graduating from high school, fate gave the girl the opportunity to make her first feat. The girls walked in the city Park, which was located on the shores of the lake. One of walking, the young man slipped on the stage, immediately got into deep water and began to sink. It was in the eyes of many, but has rushed only Rima is as she was in a dress and shoes and she managed to save the boy.

Rima was 19 years old when she graduated from high school and got a job as a national teacher in the village of Petrovskoe of Blagodarny district of Stavropol. Reviews about her work was beautiful. Rima wanted to go to St. Petersburg to continue education, but this intention was prevented by the First world war.

the angel on the front

In the early days of the war Rimma Ivanova entered the short courses for nurses and simultaneously got a job in Stavropol diocesan hospital, where the wounded arrived. In January of 1915, despite the protests of parents, Rimma went in front in the 83rd Samur infantry regiment, which was based in Stavropol.

in Order not to attract undue attention, and to get to the front, the girl had cut her hair short, dressed as a man and called himself Ivan Ivanov. Soon incognito was revealed, but despite the fact that women served only in the rear hospitals, Rima was allowed to stay at the front. She constantly threw herself into the thick of the battle and bravely pulled the wounded from under a heavy fire of German troops. Three months of brutal fighting, the girl saved nearly 600 soldiers, including several officers. She was awarded two medals of St. George “For bravery” 4 and 3 degrees and the soldier’s George cross. Co-workers adored the brave sister of mercy and considered it the mascot of the regiment. In General the photos show how respectful and kind to her soldiers and officers. It was then that the girl was nicknamed, the Holy Rima.

In letters to parents rimmy manifested the greatness and the purity of her soul, and the scale of the thoughts, incredible for a modest provincial: “Think what you want but I give you my word of honor that many would give in order to alleviate the suffering of those who shed blood. But don’t worry: our dressing station is not exposed to fire… My good, do not worry for God’s sake. If you love me, try to do as I should… so this will be the true love for me. Life is short and we should live it as fully as possible and better. Help Me, Lord! Pray for Russia and mankind”.

in the Summer of 1915 Ivanov got a break and spent it in Stavropol with my parents. In September she returned to the front, this time in location 105 of the Orenburg infantry regiment, under his brother, the regimental doctor, Vladimir Ivanov.

Rima has made the appointment of the member of the 10th company, which fought on the front lines. September 9, 1915, the regiment attacked German location Wet near the village Dubrovo, Hrodna province. The fight was unequal and cruel. Despite the fact that around whistling bullets and the shells exploded, Rima continued to rescue the wounded and give them medical help.

the Enemy almost came close to the Russian positions. All the officers were killed, the soldiers started to panic and flee. Then Rima in her white shawl sisters mercy jumped out of the trench and shouting: “Soldiers, follow me!” and took everyone who was still able to bear arms.

Counterattack was successful, the Russian combat troops raided the enemy’s trenches and drove the Germans from the occupied borders.

Rima in the battle, was fatally wounded by an explosive bullet. She was only 21 years old.

the Girl was mourned by all who knew her. At the initiative of the personnel of the regiment to the Emperor Nicholas II was sent a petition for the posthumous awarding of Rimma Ivanova George cross 4-th degree, which was awarded only to officers. Before this order was awarded to only one woman: his founder the Empress Catherine II. Despite the fact that Rima was neither a noblewoman, nor an officer, was not at all a warrior, and personally fought, the Emperor signed the petition.

Interestingly, this was followed by a note of protest from the wounded Germany: how could the Russian Tsar to award a combat medal a nurse, which to fight, was not supposed to.

Rimma Ivanova was buried in his native Stavropol, St. Andrew’s Church, gave her military honors. Archpriest Sergey Nikolsky said during the funeral of: Sister of mercy became the leader of the host. France had the maid of Orleans – Joan of Arc. Russia is Stavropol virgin Rimma Ivanova. Now her name will live forever in the kingdoms of the world”.

About the heroine put a song in her honor and established a scholarship.

the Community began raising funds to erect a monument to the heroine in her homeland. But there was a coup, but the Bolsheviks were interested in the personality of an entirely different order. Grave of Rimma Ivanova who saved their lives so many Russian soldiers were srovnani with the ground. In our time some have identified her burial place and found there a modest tombstone. On the building of the former Olginskaya gymnasium placed a memorial plaque. Stavropol diocese and the medical College established an award named Rimma Ivanova for the sacrifice and mercy.