Home Breaking Some foreign armies use the AK at the moment 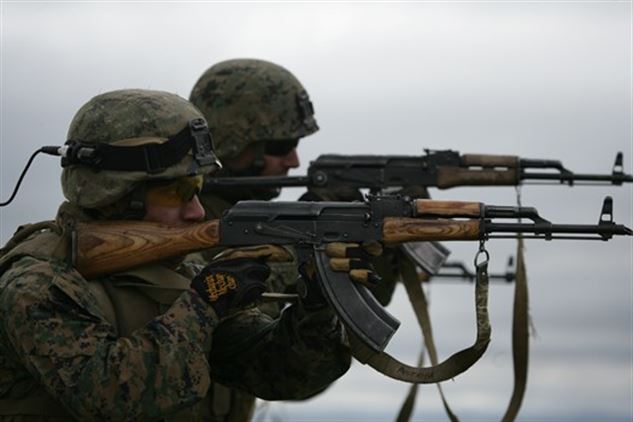 Kalashnikov production of Izhevsk mechanical plant entered service with the Soviet army in 1949 and immediately established itself, demonstrating high reliability and durability. AK is probably the most popular and recognizable firearms in the world. For nearly 70 years the machine is a frequent “guest” of the military conflicts around the globe. The number of different modifications is large, and the number of released copies, including artisanal weapons experts estimated at 100 million units.

In 1974, Mikhail Kalashnikov introduced a new version of the machine (AK-74), “sharpened” under the new unitary cartridge of 5.45 by 39 mm instead of 7.62. The largest of the 4 major variants of these weapons was widespread AK-74 Modernized with folding butts of polymers, and a universal mount for various sights. “Kalash” Soviet soldiers entered the mountainous Afghanistan. After the collapse of a single country machine remained in service with almost all post-Soviet countries, as well as Cuba, Syria, Afghanistan, Jordan, Mongolia, Greece. In the armed forces of the United Germany is of limited use. The Polish “Tantal” was developed on the basis of the AK-74 in 1988, and officially delivered to Iraq. Also their licensing options in the 80s were released Hungary and Romania. Interestingly, in 2010, the Azerbaijani side and “Izhmash” concluded the contract for the production of the machine is supported, modification 74.

the Idea spread relatively easy in the production of the machine among the Communist countries began with the threat of another world war in 50 years. With the advent of the Warsaw Treaty Organization in 1955 countries friendly to the USSR has received patents on the production of AK. Despite the rapid deterioration of relations with China, the Chinese copy of the machine called “Type 56”, having folding needle bayonet and a fully enclosed fly, got into mass production. “Type 56” was the indispensable weapon of the Vietnamese guerrillas, armies of North Korea and Sri Lanka and also the Afghan Mujahideen, Pakistani and Iranian insurgents. According to some, the machines fall to the “spooks” with the help of the CIA programs. Soon the Americans themselves, entered Afghanistan and noted the existence of a “cult of the Kalashnikov”, which have learned to enjoy even the children. Standard AK-47 has become a real cult object of a life and on the African continent, where it is used in most armies and were involved in all the clashes between different African countries. The brainchild of Kalashnikov emblazoned on the modern flag of Mozambique, expressing the idea of hard struggle for independence.

From the Finnish swamps to the Holy Land

Among other unlicensed copies of AK is worth noting a class of Yugoslav rifles and machine guns “Zastava”, the ideological model-the successors of which are still created in Serbia and Iraq. After winning the six day war in 1967, Israeli designers interested in captured samples, the AK used by the soldiers of the Arab coalition. Because of the need to go to another caliber in 1972, the machine appeared “Galil”, which is a modified version of the Valmet Rk 62, Finnish license copy of the “Kalashnikov”. “Galil” had a significant mass (about 4 kg) and bent up the bolt handle and an extra box of an interpreter modes of fire. Also included was a fixture for opening the bottles, as the soldiers often did it through the store. Israeli machine, in turn, became the progenitor of the South African model Vektor R4 and the Croatian APS-95.

an Indian “clone” INSAS was in fact created under the cartridges, which were absent in the country. In addition, he received the ability to fire rifle grenades. He was a brave decision of the Romanian producers for the extra arms barreland changing the shape and size of the forend and butt. It should say that on the modified samples of the 80-ies and 90-ies of the last century, the most influenced by the guns of the North Atlantic Alliance (NATO). Despite maintaining the original principles of the system of the AK, with modifications, for example Chinese Type 86S and the Ukrainian “Vepr”, are increasingly using the layout of the bullpup, in which the trigger and the trigger are placed in front of the store that allows to reduce the length without losing range and accuracy of fire.

Almost everyone is accepted the sample is a descendant of the famous machine can be found in different parts of the world due to the international arms exports. It is therefore not surprising that dozens of US companies produce components, parts or entire machines, which are legally available for purchase on the us arms market.