Home Breaking Sergey Paramonov: what has become of the “Soviet Robertino Loretti” 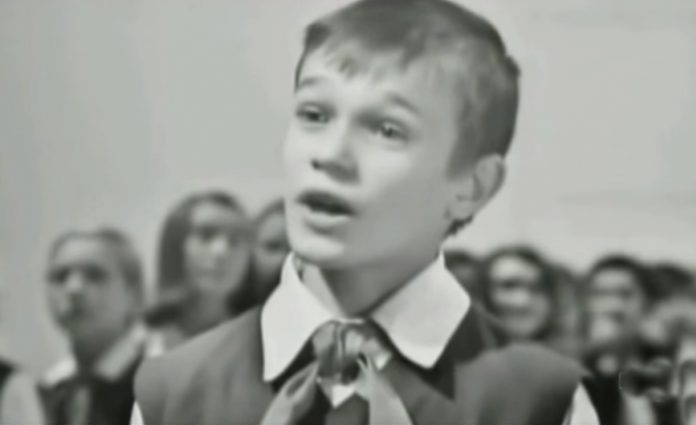 Sergey Paramonov knew the entire Soviet Union. There was not a man who would have never heard performed by Big children’s choir Union radio and Central television, under the direction of V. Popov song “birthday” from cartoon about crocodile Gena and Cheburashka, or “Blue car”, “Antoshka”, “Smile”. And those who heard these songs, have not been able to forget the soloist, by its clear, transparent treble, which combined with a surprisingly charming, playful style of performance made a lasting impression. This soloist was Sergei Paramonov, who was very soon dubbed the “Soviet Robertino Loretti”.

suddenly in the 60-ies, not yet become fabulously famous, already fed your voice parents, brothers and sisters, and when his records were sold worldwide, has provided not only the family but also himself in the years ahead. Voice changing the result of age-related mutations was not a life tragedy. Roberto Loretti and continues to sing, giving concerts, is engaged in production and Commerce.

He was born in 1961 in Moscow, in the family locksmith and cleaners. In 1971, when Sergei was in the 4th grade of secondary school, grandma brought him to audition in the Big children’s choir of the USSR radio and television. He sang a song about the young drummer, and was immediately taken in the Junior group of the choir. A year later he became a soloist, despite the lack of music education.

Director of the choir Victor Popov recalled that Sergei stood out among the other singers that sang effortlessly, with great pleasure. He was not afraid of the stage, not constricted, almost instantly felt nature of the songs, independently and accurately reproduced all of intonaoperational nuances, he didn’t need to rehearse a lot.

Solo debut Serezha Paramonov took place on 16 December 1972 on the main pop concert of the year — “Song-72”. Serge performed a “Song of the crocodile Genes” to the music Shainsky. This room created a furor. The audience applauded and shouted “Encore!”. Directors, contrary to the established rules of television, decided on re-performance of the song.

Along with the chorus, Sergey Paramonov took to the stage a Columned hall and other prestigious venues and has performed with such renowned artists as Claudia Shulzhenko, Ruslanova, Leonid Utesov. Sang a duet with Muslim Magomayev. Once at the opening ceremony of the next party Congress he was handed a bouquet of flowers to Brezhnev. The choice on him was not accidental. Due to its phenomenal popularity, Serge has become for the country, “a pioneer boy, a pioneer and public-spirited”. The burden of glory for him was reflected in the fact that he had to learn, buses to give way to old ladies, and generally, to be always and in all example. However, Sergey coped with it without any problems. Everyone is talking about him as a very friendly, organized child, a good boy. His time in mischief, playing in the choir, learning takes a lot of energy.

A song from the repertoire of Sergey Paramonov has been specially written by the authors for it. For example, the song “Please” by Alexandra Pakhmutova on poems by Robert Rozhdestvensky. Vladimir shainskiy named Sergey Paramonov “the landmark singer in my life.”

I did not earned money – the Big children’s choir of radio and television was Amateur team. His family has been able to improve their living conditions, but not because of the concert work of his son, just came up turn to the apartment. But in those years the Soviet boy Serezha Paramonov and in a head did not come to expect money for their performances. He just sang, getting from this immense joy and giving it to others.

it was broken in 1975. Speaking at the concert dedicated to the works Christmas song “Please”, Sergei felt the first time that can not have a voice. He started voice mutation.

As experts say, in puberty boys to sing not, it may affect the tone of voice for life. But he continued to speak. This led to the fact that he began to “miksovat” on the high notes. Songs at the time written specially for him, since 1975 began to be fulfilled by other soloists. Paramonov had to leave the choir.

Victor Popov later told me that forced Sergei to go to music school so he had a proper education. And there are adults convinced him to create a vocal-instrumental ensemble. And sing. It’s finally “finished off” mutating chords young performer. Good adult voice he never received.

In the life of Sergey Paramonov was a hard period. He grieved at the departure of the choir and its uselessness, continued to go to rehearsals as a spectator. They say he could not hold back tears when one of the new soloists sang songs from his repertoire.

after some time Paramonov entered the music school. Ippolitov-Ivanov at the conductor-choral Department, but never finished it.

Musical creativity Sergey left. He worked in the troupe of Rosconcert, acted as master of ceremonies, sang songs Shainsky. Played in numerous BAND, he worked in the entertainment ballet, sang in restaurants, has appeared on radio and TV, even worked with the Gypsy chorus. A little writing music, was arranger, organized a disco for pensioners in the Park “Sokolniki”.

All these wandering and find themselves often turned into drinking bouts. From Paramonov’s wife left him, he suffered greatly from the separation from her son.

15 may 1998 Sergey Paramonov frommeasures. The reason is ischemia of the heart, left-sided pleuropneumonia. He was 37 years old.

His friend Sergey Mazaev said of him: “He was a man infinitely good, internally intelligent, he never for himself demanded nothing — he lacked this rudeness, arrogance. Serezha too soon became a star, however, was never presented yourself. But in this world how? When I need you, everybody loves you. And when used, immediately forget. Serge couldn’t knock in the back, to remind myself.”