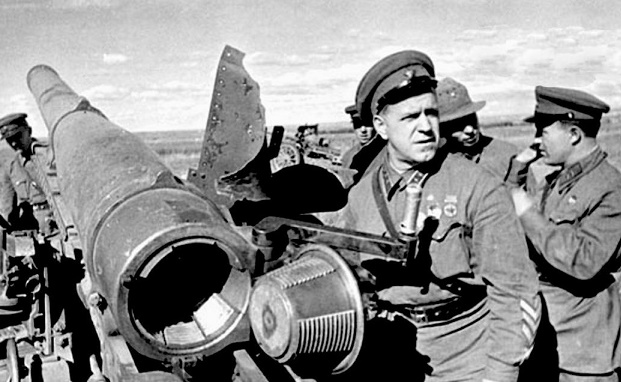 History 21/03/20 the Battle of Khalkhin Gol: the first triumph Zhukov

in the Spring of 1939, the undeclared war in Khalkhin Gol, which, by its intensity and quantity thrown into battle technique was not inferior to many of the events of the great Patriotic war.

Perhaps none of the events on Khalkhin Gol in may-September 1939 does not cause as much controversy as the battle for mount Bain-Tsagan July 3-5.Then 10-strong Japanese group managed to secretly cross the Khalkhin-Gol and start the movement to the Soviet crossing, threatening to cut off the Soviet troops on the East Bank of the river from the main forces.

the Enemy was accidentally discovered, and before reaching the Soviet crossing, had occupied a defensive position on mount Bain-Tsagan. Learning about the incident, the commander of the 1st army group Zhukov commanded the 11th brigade of the brigade commander Yakovlev and a number of other armored units immediately and without the support of infantry (motorized infantry Zhukov lost in the wilderness, and came to the battle later) to attack the Japanese positions.

Soviet tanks and armored cars made several attacks, but, after suffering considerable loss, were forced to retreat. The second day of the battle came down to the constant shelling of Soviet armored vehicles of the Japanese position, a failure of the Japanese offensive on the Eastern shore has forced the Japanese command to begin a withdrawal.

Until now, historians argue to what extent was input to the combat brigade Yakovleva from the March. Zhukov himself wrote that deliberately went for it. On the other hand, had the Soviet commander another way? Continued movement of the Japanese to the crossing of the promised catastrophe.

Controversial aspect of Bain-Tsagan of still is and the Japanese retreat. If it was a General flight or systematic structured withdrawal? The Soviet version was painted defeat and destruction of the Japanese troops, who failed to carry out the crossing. The Japanese side organized to create a picture onistupleniya, indicating that the bridge was blown up already when it entered Soviet tanks. Miraculously, under artillery fire and air strikes the Japanese managed to cross to the opposite shore. But the rest of the cover, the regiment was almost completely destroyed.

Bain-Tsagan is difficult to name a decisive tactical victory for one side. But in strategic terms — is, of course, the victory of the Soviet-Mongolian troops.

first, the Japanese were forced to begin a withdrawal, having suffered losses and did not fulfill the main task — the destruction of the Soviet crossing. Moreover, throughout the conflict, the enemy never tried to force the Khalkin-Gol, and physically it was impossible. The only kit of bridge equipment throughout the Kwantung army was destroyed by the Japanese during the withdrawal of troops from the Bain-Tsagan of.

Then the Japanese troops could only carry out operations against the Soviet troops on the Eastern shore of Khalkhin Gol, or wait for a political solution to the conflict. However, as you know, waited for the enemy is quite another.

Among the Soviet commanders who distinguished themselves in the battle of Khalkhin Gol, an exceptional place is occupied by Mikhail Pavlovich Yakovlev, commander of the 11th armored brigade, which bore the brunt of the fighting on Khalkhin -.

Participating in the fighting in just 10 days, Yakovlev has held a number of operations, which largely determined the turning point in the course of the conflict.

having Suffered defeat in the battle near Bain-Tsagan the Japanese command concentrated its main efforts on the actions against the Soviet-Mongolian forces on the Eastern shore of Khalkhin Gol. Several large-scale attacks were conducted on the position of the 149th infantry regiment, and on 12 July a group of three hundred of the Japanese with heavy machine guns managed to go to the Soviet crossing.

Zhukov instructed Yakovlev under the personal responsibility to eliminate the threat. The outcome of the battle decided the Soviet chemical tank, giving the fire jet in the center of the enemy positions. Firmly viderisAya artillery bombardment, tank and air attacks, the Japanese have always retreated before the flamethrower tanks.

Japanese soldiers tried to escape at the bottom of an enormous hollow with a diameter of several tens of meters, where they were surrounded and destroyed. Prisoners in this battle were not. Basin, where he found his death several hundred Japanese soldiers got a grim name, “grave of the samurai”.

However, this fight was the last for the brigade commander Yakovlev. It is often said that he died in the destroyed tank at the Central Museum of the Armed Forces stored wrist watch commander, with broken force of the explosion with glass.

According to another version, Yakovlev died from a bullet of the Japanese arrow, raising the attack of the infantry. Posthumously Yakovlev was awarded the title of Hero of the Soviet Union. The name of the brigade commander was assigned to the 11th brigade, which he headed, and later the tank regiment of the army of the MPR.

Grave of the brigade commander in Chita, unfortunately, was abandoned and forgotten, and the construction on the old site of the Chita cemetery in 2009-2011 Wellness and entertainment complex finally lost.

“Cannes in the desert”

20 August 1939, Soviet troops began a major offensive, taking the battle to the Japanese environment group. The main blow was planned to be from the North, however, due to the inconsistent action, the first attack was not successful.

thinking that the main attack in the southern sector, the Japanese command sent the main reserves. Meanwhile, concentrated on the Northern front, Soviet troops struck a powerful blow to the enemy proved fatal. The ring around the Japanese groups have closed. Fighting broke out in the destruction.

How many Japanese soldiers were in the ring? How many managed to break through? – this question still remains open. The number surrounded and destroyed inside the ring is often estimated at 25-30 thousand people. The Japanese themselves are very evasively meant their losses. When they were allowed to take the bodies, they did not specify how many bodies they need to find.

Only the Japanese were transferred 6281 body, and how many enemy soldiers remained in the Sands of Mongolia, it is impossible to say. Officially the Japanese side during the conflict (excluding losses barudov) acknowledged the loss of 8632 killed, 9087 men wounded. Most of them were in the 7th (lost one-third of the personnel) and the 23rd division (lost more than two thirds of the whole).

on 28 August 1939, Zhukov sent to Moscow triumphant report about the total destruction of major enemy, to which Voroshilov and Shaposhnikov was treated very carefully, putting: “As you might expect no divisions in the environment were not available, or the enemy managed to take the main force, or, rather, of a large force in the area is long gone, and sat specially trained garrison, which is now completely destroyed.”