Home Breaking The company that designed the campaign of the PP andaluz boasts of... 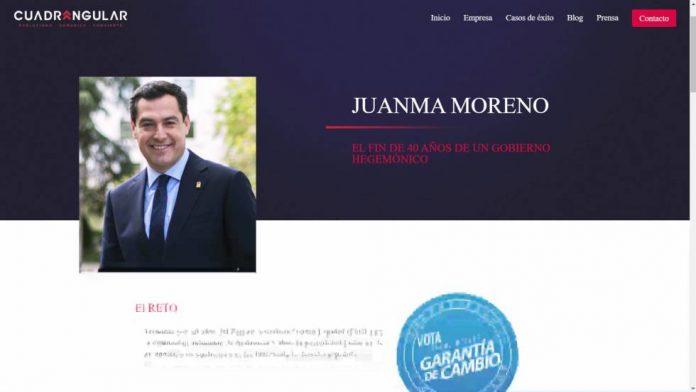 The arrival to the regional government of Andalusia of the leader popular Juan Manuel Moreno is one of the biggest hits of that boasts the mexican company communication Foursquare. The campaign he designed for the PP andaluz for the elections of regional of the December 2, it was touted on their website through a video as a “case of success”. In the spot, the company removed it from their site on the 30th of October, highlighted their strategies in social networks to foster the null vote and abstention, through assumptions profiles of followers of other parties. Precisely, the low participation —the second-worst in the electoral history of Andalusia— was the key to explain the discreet victory of socialist who led the PSOE lost the regional Government for the first time in 37 years.

false Pages of Facebook in favor of PP spend up to € 40,000 in ads Facebook allows the network of fake websites in favor of the PP can continue to operate

In the video, which has had access to this journal, will show screenshots of information of means of communication that Foursquare seeks to highlight the strong points of his campaign. In one of them it shows a post in a Facebook account Socialist by the Change in Andalusia, a profile that was created on the 29th of September, and ceased on the same day of the elections in andalusia. The account, which supposedly represented the militant socialist sanchistas unhappy with the candidate of the PSOE to the Board, Susana Díaz, was distributing messages in which it highlighted the profile “populist, treacherous and sectarian” of the then president of the Board and inviting not to vote with the hashtag:#Consusanameabstengo, as highlighted in another of the information selected in the promotional video of the mexican company. The holder of the other of the selected news is: “The PSOE has detected thousands of ballots with the name of Susana Díaz crossed out”. Another of the publications of Socialists by the Change encouraged to cross off the ballot, the name of the general secretary of the socialist andalusian.

promotional Video from Foursquare that boasts of his work in the past elections in andalusia.

This morning, the PSOE in andalusia has denounced the similarities between the profile Socialists by the Change in Andalusia, and other how to Retrieve the PSOE, I did not vote, With Rivera, countervailing power, or I with Íñigo, that have been created in the last few months, and have been deleted, in that it favors the abstention the next 10 of November or encourage the internal rivalry within parties.

Web of the Napolitan Victory Awards in the cited Aleiz Sanmartín as a member of team Foursquare nominated for Campaign of the year.

The campaign of andalusia received numerous recognitions, of which Foursquare boasts on its website, including a photo of its ceo, Miguel Valdez, with Juanma Moreno. They were finalists of the awards Napolitans —considered the Oscar of political communication— a campaign of Attack of the year and Best Campaign of the Year, in whose credits the organization includes the Valdez and Aleix Sanmartín, one of the main referents of the electoral strategy of the PP in andalusia and it has been incorporated as signing star to the leader of the party for the 10-N, Paul Married. Sanmartín, who won that award in the specialty Best Election Campaign is unlinked, however, of the mexican company. “I participated in all areas of the electoral campaign of Moreno, I was in all you can be, posters, image, discussions… Foursquare was a company that provided services,” he added in a telephone conversation. “What you publish on your website is the thing of them,” he adds. The president of the Board, at the end of the video that has been removed from the website of the mexican company, thanks to the work of Foursquare: “Thanks to them we can boast probably the presidency of the regional government of Andalusia. Thank you heart and I hope that you help many more teams that wake up the illusion in all corners of the world

The PSOE in andalusia, reported to the Board of Elections of Andalusia, the profile Socialists by the Change in Andalusia, but from the agency supervisor is argued that it should prevail on the “right” to freely express and disseminate thoughts, ideas and opinions through words, writing or any other means of reproduction”. In your recording, Foursquare explains that for the campaign of the PP is “trained 700 ambassadors digital in all the andalusian provinces” that were incorporated into groups of WhatsApp through the generated content, which reached 4.4 million people, according to the video. With groups that detractors Foursquare built a powerful campaign of contrast that permeated with more than 2,260 million in the segment socialist, both in the digital as in the mass media of communication”, explains the company, recognizing that a good part of its strategy is dedicated to influencing the voters of socialists to generate dissatisfaction and lead to abstention. Sources consulted agree that to generate such impact would have to invest between 50 and 100,000 euros.

Screenshot of a promotional video of the company Foursquare.

Sanmartín, in a promotional video on the occasion of the awards Napolitans, acknowledges that “the negative campaigns are the most effective, have immediate results and, although people say they don’t like, are the most remembered”. When picked up the award was accompanied on the stage of the counselor in the Presidency of the andalusian Government, Elias Bendodo —responsible for the campaign autonomous of the PP—, the councillor of Source of Stone (Málaga), Jacobo Florido and of the deputy regional of the PP in Málaga, José Ramón Carmona, who also participated in the electoral strategy of the 2-D.

Asked the PP about if you are going to keep Sanmartín as a partner, Married, sources in the party claimed that “collaborates with the party as many, many more in the campaign” and that there is no reason to break up with him, reports Natalia Junquera . “If you have any proof that I is behind that profile [who has reported this Thursday the PSOE] to the present”, asks Sanmartín.

The arrival of Sanmartín the team of Moreno on the eve of the regional elections of 2 December last, from the hand of Carmona, who served during the race, raised the suspicion of the inner circle of the leader popular. The boot campaign in a brothel —to denounce the scandal of the diversion of the public funds of a former foundation Board at parties in clubs, brothels— or the photo of the now president hugged a cow not sat well. None of these milestones electoral highlighting appears andl promotional video of Foursquare. Yes other information is collected that refers to the social media campaign that was spread through accounts of new generations of the PP andaluz in the called rats to the political socialists, and were mixed in various scandals such as that of the above-mentioned foundation or the ERE and is activated coinciding with the appearance, at the instance of the popular, of Diaz at the commission on illegal financing of the political parties in the Senate, on the 8th of November 2018, one week prior to the start of the campaign in andalusia.

Facebook included the obligation to identify those who insert advertisements of political parties in January of this year. Thanks to the library of the social network is known to the militant of New Generations of the PP in Murcia, Javier Ager is the person who has paid for the post profile as seemingly disparate as to Recover the PSOE, I did not vote, With Rivera not or countervailing power. Josep Lanuza, an employee of Sanmartín, is behind Me with Íñigo. This account to share videos and creatives identical to those disclosed I did not vote. “My employee decided to publish this campaign to support Errejón for your account. It would be against the freedom of expression that I were unable to publish what he wants with his name,” indicates the communicator.