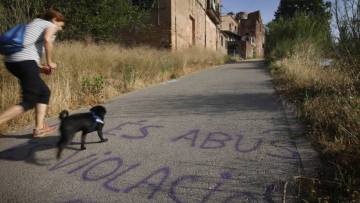 Patricia Faraldo Cabana, professor of Criminal Law at the University of A Coruña, is a permanent member of the general commission of codification that produced a report to review the sexual offences in the Criminal Code, submitted to the Government in December 2018 and calling for, among other changes, eliminate the sexual abuse of the law: all is aggression. It argues that the judgment in the case of Manresa “is a clear example of the distinction between assault and sexual abuse should disappear. A fact of these features is as serious as one with intimidation. Socially not understood the difference.”

Question. What do you think fails this sentence?

Response. Is an attack on a minor by at least five subjects, taking advantage of the unconsciousness. The sexual freedom it is seen as affected by these facts as if you had put a knife to the neck. Punish unless these assumptions means to protect less women who get drunk, smoke marijuana and are unconscious because they can not tolerate the substances. It is like telling them: ‘do Not drink, I will protect you less.’

The professor of Criminal Law at Patricia Faraldo.

Q. What would have changed with the proposal of the experts?

A. Is equated to violence or intimidation to the joint action of two or more people. It would be one of the most serious cases.

Q. how would you Change the penalties?

A. No. It is not a matter of sentences but of legal qualification and of interpretation of sexism.

Q. why is sexist?

A. If a person is around five guys night, drunk, and, without saying anything, extend your hand and ask for the portfolio, are always going to be considered theft with violence. If it happens to a woman and ask for sex, let’s discuss whether consented to or not. Rape should be a crime that is done without consent of the victim and not against their will. The latter forces you to analyze the behavior of the victim is always: what has been opposite enough? And not focus the attention on the author, what is important is the behavior of it. There has to be a paradigm shift. The silence is not consent, nor should it be construed as such. When in doubt, the man must abstain. If you are not sure whether she consents or not, or if she be silent, that you do not touch it. That must be the message and not the now, if she remains silent, consents.

Q. does it surprise you that the change is not yet in place?

A. The interim Government does not help. Nor was there a clear intention to modify this. Among the specialists there is a widespread agreement on that you have to modify the sex crimes. The application of Catalá [Rafael Catalá, minister of Justice in April 2018] was to analyze whether there were reasons to modify sexual offences. The commission was not very keen on changes of great depth, what is delivered is a fraud label. We call it another way, everything is aggression, but we keep the distinction between violence and intimidation and the rest.

Q. How it would have been a reform draft?

A. The proposition of United we Can, focusing on the lack of consent of the victim, and that equate violence and intimidation with attacks on people who are deprived of sense.

Q. Are you satisfied with the end result of the commission?

A. I Am absolutely against, was a report very bad technically. Does not respond to what he asked for citizenship. I was not at the last meeting and I could not leave a record of my rejection, but I sent an alternative.