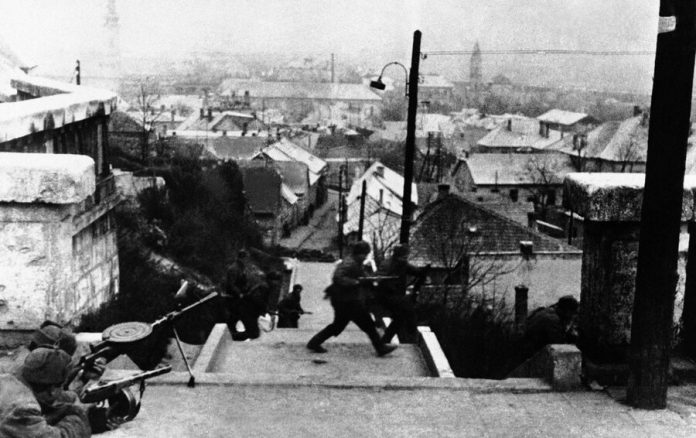 the defense Ministry released the documents to the 75-th anniversary of the liberation of Budapest from Nazi Germany. Previously they were classified.

there are a lot of unique materials from the collections of the Central archive of the defense Ministry. Among them is a scheme of the enemy at the start of the operation. The section has documents on the attitude of the Germans towards prisoners of war and civilians. In the publications described the massacre of the Jewish population of the Hungarian city of Szeged.

the report notes that the Hungarian capital was liberated on February 13, 1945, after 108 days since the beginning of the strategic offensive operations of troops of the Second and Third Ukrainian fronts, with the participation of ships of the Danube flotilla.

the defense Ministry calling for publication of the protection of historical truth, countering falsification of history and attempts to revise the results of world war II.

In January, the Department published the documents for the 75th anniversary of the liberation of Warsaw from Nazi invaders by the red army. This is footage of the photo album, newspaper, map, reports, transcripts of interviews, transcripts of talks and others.

a Year earlier on the website of the Ministry of defense appeared digital copies of declassified documents about the blockade of Leningrad. We are talking about the decision of the Military Council of the Leningrad front dated 24 November 1941 on the construction of winter roads and the decree of 1 may, 1942 about the construction of a strategic pipeline with a length of 35 kilometers for delivery of fuel to the Leningrad.