Home Breaking The defense of the zamość: how Petliurists he defeated the army of... 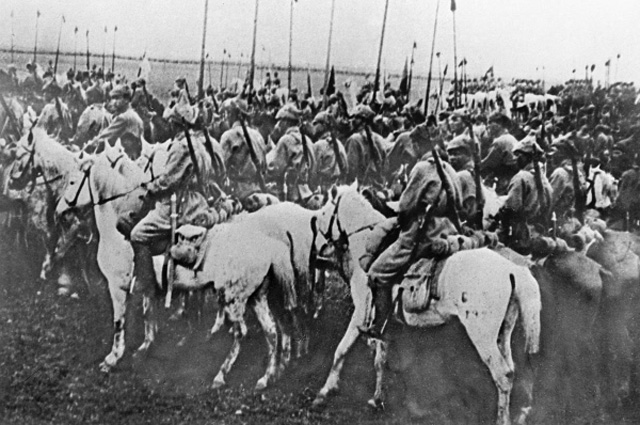 History 27/02/20 the defense of the zamość: how Petliurists he defeated the army of Budyonny

In a popular Soviet song about the First cavalry army was sung: “I Remember the dogs-the chieftains./Remember the Polish gentry./Konarmeyskaya our swords”. But special words about Ukrainian independence supporters, it was not. This is despite the fact that the 6th infantry division of the army of the Ukrainian national Republic (UNR) was in the summer of 1920 a permanent enemy army Budennogo all the way from the Dnieper to the San. Maybe it’s because it is, after all, stopped the advance of the First cavalry?

Petliurists in the Polish army

In 1919, the UNR army led by Symon Petliura had to keep fighting on three fronts: against the red army against the white guard Armed forces of South Russia (VSYUR) of General Denikin and against the poles. With someone from them it would have to form an Alliance. Ukrainians are divided. One part called for Union with Poland at the cost of losing part of the territory of Ukraine. Another disagreed and in November 1919 he moved to the side of Denikin. Finally, the whole gang headed by the Colonel Why the Volokh moved to the side of the Bolsheviks and joined the red army.

Petlyura headed a group that advocated for the Alliance with the poles. In preparation for the resumption of war with Soviet Russia, Pilsudski, in turn, attracted to their side the Ukrainian and Belarusian bourgeois nationalists. 21 APR 1920 in Warsaw he and Petlura signed an agreement under which Poland recognized the independence of Ukraine. In response to Poland received the Western territories inhabited by Ukrainians – not only those before the First world war was part of Austria-Hungary (Eastern Galicia, with Lvov), but also the entire Holm and Volyn Lutsk, Kovel and Rovno. The Eastern border of Ukraine had to decide the future agreement with Soviet Russia after the victory. Petliura was given the right to form a Ukrainian army.

So in the same ranks with the Polish army against Soviet Rof the Republic, in 1920, fought the army of the UNR. The first was formed by the 6th infantry division under the command of General Mark Bezruchko. She is still in the winter of 1919/20 on the job Petlyura made a RAID on the rear VSYUR and the red army, and in the spring of 1920 took part in the offensive of Polish troops in right-Bank Ukraine. In the summer of 1920, she participated in the reflection there of the Soviet offensive, was badly battered, but kept fighting capacity. Together with the Polish troops it retreated West of the river bug, in Volhynia.

To the rescue the Western front

In August of 1920, it seemed to many that Soviet-Polish war will be over soon triumphant entry of the red army to Warsaw. To most observers it seemed that the red army will not stop. They have imagined the Reds in Berlin and other European capitals. However, the very Soviet leadership shared these illusions. It is planned to carry the banner of the proletarian revolution further in Germany and Western Europe.

while the army of the Soviet Western front under the command of Mikhail Tukhachevsky approached Warsaw, the troops of the southwestern front (commander Alexander Yegorov, member of the revolutionary military Council of Stalin that had Egorova great influence) was going to take the lions. On August 11 the commander of the troops of the Republic Sergey Egorov Kamenev ordered to reassign the 1st cavalry and the 12th army of the Western front. I needed to send to Warsaw to increase the force of impact. However, the command of the southwestern front has ignored this Directive, citing the fact that the First horse has already been dragged into the battle for Lvov, and its rearrangement would require a lot of time.

meanwhile, Pilsudski managed to concentrate the forces to strike at the flanks of advancing on Warsaw, the red army group and on August 16 began a counteroffensive. The Soviet Western front suffered a heavy defeat and retreated from the Polish capital. Now the RVS of the Republic demanded from Egorov and Stalin’s transfer of the 1st cavalry to the Western front to save it from total defeat. However, this order was executed with great forvia.

the Red command decided to redirect the First horse to Lublin, to take this city to threaten on the right flank of the Warsaw group of enemy troops and force him to suspend the strike against the Western front. The relevant Directive Tukhachevsky gave Budyonny 24 August by order of RVS, although he did not believe in its feasibility.

the First cavalry were continuously engaged in offensive battles from June, 1920, with the liberation of Kiev. In the last unsuccessful battle for lion suffered heavy losses and did not have time to replace it. Your RAID on the Lublin she began, with a part of his four cavalry divisions is not more than 8 thousand soldiers in the ranks.

the Battle of zamość and Komarov

27 Aug First cavalry start moving from the area of Sokal. On the path lay the town of zamość (Pol. Zamość), defending the 6th Ukrainian division, numbering 4,000 bayonets. I wonder what her neighbors in the front were also national and the white part, made an Alliance with the poles: right – Donskaya brigade left 2nd division Ukrainian, Kuban brigade and brigade of the Belarusian “father” of Bulak-Balakhovich. The stubborn defense of Petlura Zamosc, a former important centre of local communications, and chained the forces of the First cavalry.

August 29, the vanguards of Budyonny tried to go seize Zamosc, but met strong resistance. The next day the city came the main forces of the Soviet 6th and 11th cavalry divisions. They managed to surround the city. Dismounted, the red cavalry had made several attacks. Zamosc was surrounded by a chain of individual rifle pits, only in some places covered with one or two rows of barbed wire. Petliurists took a defensive perimeter.

Bravely and aptly acted by both parties. So, Budennovsky managed to disable two of the three armored trains, which supported the besieged. But to take the city, they could not. Petlura was passed in a desperate counter-attack, including night and kept Zamosc. To move on to Lublin, with the rear not taken Zamosc, red could not. To stay in place was too dangerous. The first horse got too deep into the enemy rear, and the adjacent 12th army, in spite of all requests Budennogo, are unable to support it. From the South came a group of General Haller as part of the 13 th infantry and 1st cavalry divisions of the Polish and the North – 2nd division foreign players. In fact, on 31 August the First horse she was surrounded by. On the same day, Budyonny decided to back off and break to the main forces of the southwestern front.

At the break the Polish encirclement of Komarov First horse suffered new heavy losses. From 1 to 6 September under the continuous attacks of the Polish troops, she departed for the bug in the district of Volodymyr-Volynskyi. Soviet military historian Nikolai Kakurin pointed out that heavy rains eroded the road in a wooded area, Budyonny was prevented to carry out the initial Directive. It is obvious, however, that these same roads prevented the poles to harass the retreating First horse that saved her from total destruction. And important role in the defeat was played by the defense of the zamość Petliura, who won two days concentrating around the Polish troops.