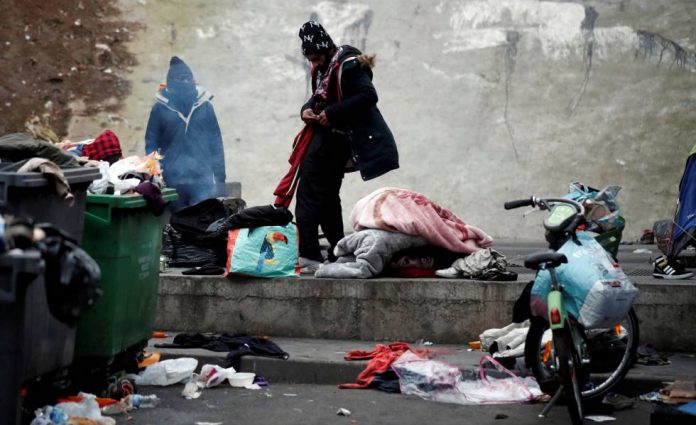 is Not the first dismantling of a camp of immigrants in Paris. In fact, you go 59 from 2015. But the operation in the morning of this Thursday in the north of the French capital itself was of a magnitude unusual: 1.606 migrants were evicted from two camps in which they lived in tents and in insanitary conditions, according to the Prefecture of Police. The eviction also occurs in a new context, the hardening on the part of the Government of Emmanuel Macron’s tone in the area of migration, the theme has just announced the introduction of a policy of quotas, and access restrictions to the health of the asylum seekers that have been made to put the cry in heaven to humanitarian organizations.

The dismantling operation began at dawn and lasted till the early hours of the morning. The prefecture of police moved to 600 agents to the camp at the Porte de la Chapelle and in the area of Saint-Denis, in the north-east of Paris. The prefect of police, Didier Lallement, signed the eviction order citing, among others, to a health situation “strongly degraded” and the abundance of health problems among the migrants there are installed, the risks of accidents in an area of heavy traffic due to its proximity to the main access routes to the capital, and the increase in “acts of crime”.

The migrants are evicted, in most of sub-saharan africa and the middle East, were transferred in buses to various facilities of the capital, such as gyms converted into temporary shelters, while the officers came to remove the tents and clean up the area.

“I’m Not going to tolerate that there is still this type of facility here or in any other public space of Paris,” he told the press Lallement. According to the Prefecture of Police, will be monitored to “prevent the reinstallation of the camps”, for which he made regular patrols and control of persons suspected of attempting to settle back into a camp. According to the calculations of local associations, in Paris living between 1,500 and 3,000 migrants in tents and other shelters precarious.

The operation took place hours after the prime minister, Édouard Philippe, report of the new immigration measures from the Government to “regain control of immigration policy” national. The strategy is considered to be a swing to the right, on its intention to set quotas of migrants on the basis of the needs of each sector. It also provides for a period of three months before seeking asylum in France to have access to Social Security except for medical emergencies.

In the presentation of the measures, the minister of the Interior, Christophe Castaner, he announced the Government’s intention to evacuate the camps of migrants in paris “from here to the end of the year”. In a statement this Thursday on the radio station France Info, said that the operations will also continue in other areas of the country with irregular settlements, as in Calais or Nantes.

The local authorities were however skeptical before the official announcements. “The prefects have assured me time and time again that the camps would not go back, but each time have come back,” said the mayor of Paris, socialist Anne Hidalgo, who has often criticized the immigration policy of the Government of Macron.

Dominique Versini, the lieutenant of the deputy mayor responsible for refugees, said for his part that many of the migrants “evaporated by Paris” before the announcement of the imminence of the dismantling of the camp. According to Versini, about 500 of the 1,300 migrants installed in the Porte de la Chapelle left before the police arrived. “We reaffirm the need of a reception policy to the extent of the arrivals, because if not, the camps will be reconstructed”, he warned on his Twitter account.