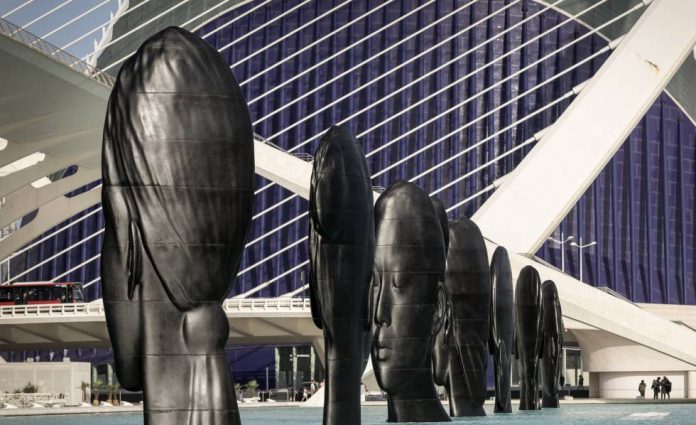 The temporary exhibition of Jaume Plensa (Barcelona, 1955) is installed in the Ciutat de les Arts i les Ciències of Valencia ended last Sunday with close to 1.2 million visits, according to the count of the entity itself. The exhibition, organized by the Fundación Hortensia Herrero, was formed by seven large heads of women installed on the water of the lake south of the complex designed by Santiago Calatrava and was inaugurated last June 26.

Jaume Plensa: “I’ve Always been a stranger,” The largest sculptural group created by Plensa, in the City of Arts of Valencia

in Addition, the foundation, chaired by the vice-president of Mercadona, Hortensia Herrero, today announced the acquisition of the sculptures Silvia and Mary, exhibited at the Ciutat de les Arts i les Ciències to remain in the Valencian Community. These two pieces now start a journey in different locations in valencia, which will start the 14 November in Elche (Alicante).

With the exhibition of Plensa, the Fundación Hortensia Herrero reached “one of the goals it had set for itself when devising this exhibition: bring art to the neighbours of Valencia and the tourists that visit us, on the one hand, and to enrich the cultural offer of the city”, according to the note of the entity. The claim of Smith is to make “Valencia a cultural reference”. In this sense, the construction of the Art Centre Hortensia Herrero will be the key to the achievement of that goal.

Hortensia Herrero and Jaume Plensa, in the City of Arts of Valencia. MÒNICA TORRES

Now, it is restaurant the Palacio de Valeriola, located in the street of the Sea, in the centre of Valencia, to accommodate that future art space. The foundation has meaning especially in the provision of funds to restore important monuments of the city of Valencia, such as the church of St. Nicholas. In the future, we will launch the restoration of the Church of The Santos Juanes, with funding from the entity.

The de la Ciutat de les Arts i les Ciències has been one of the samples most ambitious of Jaume Plensa and has put an end to a trilogy of exhibitions on the street of the great works of the Fundación Hortensia Herrero, which began in 2017 with the valencia Manolo Valdés, and continued a year later with the british Tony Cragg. Plensa is one of the Spanish artists with greater international projection, with work in many cities and museums around the world.