Home Breaking The minimum income does not reach the new poor 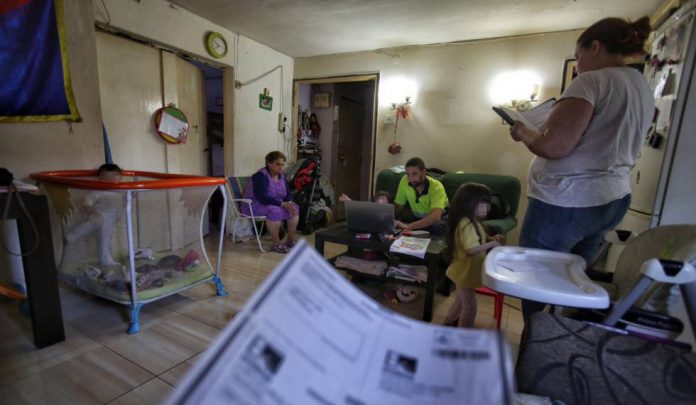 Decreases for the third consecutive year, the number of households at risk of poverty receive the minimum income of insertion, the last safety net for those who have exhausted all other resources. In 2018 benefited 100,000 people less than in 2017, that is to say, nearly 20,000 homes in the least, although the rate of risk of poverty remained almost stable in this period —only fell six-tenths, of 19.7% to 19.1%, according to the report recently published by the Ministry of Health, Consumption and Social Welfare. In 2015, the year in which the greatest beneficiaries, receiving this income 323.000 homes. In 2018 were 293.000. “From three years ago, reduces the coverage, the figures demonstrate the inability of the system to address the situations of new poverty”, explains Gustavo García, coordinator of Studies of the Association of Directors and Managers of Social Services, which has carried out an analysis of official data. “And show a shocking inequality between territories, with the Basque Country and Navarre to the head and a huge difference with the rest.”

The autonomous communities regulate these services, with different systems in each territory. Even named differently. In 2015, 8.7% of people at risk of poverty received a minimum income of insertion, according to the calculations of this association. Last year they were just 7.6% of the people who were at risk of poverty —taking into account the imputed rent, an indicator that allows to compare the situation of people with different situations of tenure of housing. Here is includes one-person households that receive an income below 10.371 euros per year; 21.779 for couples with two children. “After the crisis changed the trend, it starts to increase jobs, but more precarious. It appears the new poverty. The people who find jobs that do not allow them to pass the threshold of poverty, but prevent access to a minimum income”, points out García.

last year was the first time since 2002, when the ministry began to draw up its report, that the expenditure executed by the communities in the country as a whole decreased with respect to the previous year, going from about 1.545 million euros to around 1,519 million. And it was also the year of the entire period in which more lowered the number of holders of the performance —one per household— at almost 20,000 (over 6%) and, therefore, of beneficiaries —if one takes into account all members of the family, the passing of 779.000 in 2017 to 679.000 in 2018.

what Inequality urban or rural? How geography brand the risk of poverty in the EU-The inequality between the richest 20% and poorest 20% in the Community of Madrid is the Spain’s highest employment and housing confined to the 20% of the Catalan people in poverty In Spain, there are 8.5 million people in social exclusion, 14% more than in 2007

“The systems have not adapted. Before the crisis, these revenues were designed in the framework of the social services, to address the exclusion, which is a poverty more structural. But since this is not the current, that is more standardized workers for the shortcomings of the labour market does not have a guaranteed minimum survival even,” says this expert. “They are not designed for them, and in addition require a bureaucratic process long, which penalizes. It is therefore essential to a state law guarantee of income, it has to be a debate on the model, funding and the role of the autonomous communities”.

The data show differences “extreme” between communities. In the Basque Country and Navarre, two-thirds of the population below the poverty line receive this benefit (71,2% and 66.7%, respectively). At a considerable distance continues to Asturias, where the received 33.5%. No other community gets to 20%. Nine are below 10%. In Castilla-La Mancha are only 1.6%. In Andalusia, 1.8%. In this last, last year they received this benefit over 10,000 households less (almost 40% less than holders of these grants and a 60% less people benefited), according to data from the ministry.

“came into force In January a measure that changed the social wage, which had until then, by the minimum income. The only positive is that the former ministered to families for six months and now comes to a year”, explains Lola Contreras, a member of the Andalusian Association of Neighborhoods Ignored, with a presence in Jaen, Seville, Cordoba, Malaga and Granada. “We are in working class areas, where unemployment, precariousness and impoverishment are very high. The decree of minimum income is a career of humiliating obstacles for families,” she complains.

“The communities made an effort during the crisis. The demand exceeded dramatically the capacity of the social services. Now, in this stage of recovery, we can see how the design of the programs, sometimes very rigid, not suited to the reality. Many systems are not well matched with the job”, explains Luis Ayala, professor of Economics of the UNED. Ask for improvements. “In the Basque Country and Navarra, for example, have been able to adapt and complement very well the work with a minimum income. It is not just a matter of resources, but instead of model,” he adds. “Now we see how the latest data reveal that the number of households without any income is reduced each time to a lower speed. And at this stage of recovery, beyond the uncertainty, we see that they reduce the transitions for the most vulnerable people. Already do not pass from one employment to unemployment, to social protection and minimum income. But, when you hook up to precarious jobs, which are not normally entitled to a protection, are left with nothing”, she continues. “We need reform”.

last year, more than 293.000 people were holders of a minimum income, of which about 178,000 were women. The amount of basic media was 463,05 euros per month, compared to the 449,08 euros of 2017. But, despite this small rise, according to the calculations of the Association of Directors and Managers of Social Services, these benefits assume average just 13.7% of the average income per household in Spain.