Home Breaking The mobilization against the judgment of Manresa joins hundreds of protesters in... 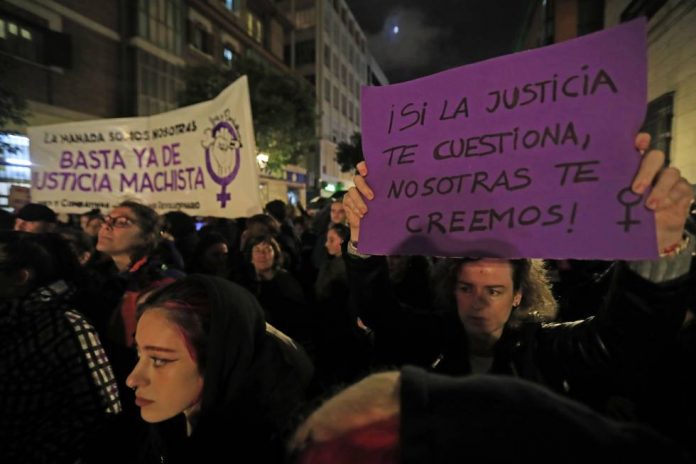 The “is not” back out in the street. The mobilization against the judgment which condemned for abuse and not sexual assault to those responsible for the violation group to a teenager of 14 years in Manresa (Barcelona) has joined this Monday, hundreds of people in several cities of Spain. Feminist organizations have convened rallies to claim a change in the Penal Code. Barcelona, Madrid, Valencia or Sevilla have welcomed the protests, in which re-heard slogans such as “No it is not, everything else is rape”, as already happened with the protests following the sentence of the Provincial Audience of Navarra against The Herd.

opposition to the Criminal Code to establish a difference between abuse and sexual assault —that is that violence or intimidation— has made in just three days, more than 135,000 people have signed a petition that has been re-launched on the platform Change.org following the judgment of Manresa. There are already more than 300,000 signatures which they claim such a legislative change. The text, addressed to the Ministry of Justice, among other institutions, urged to change the articles 178 and 181 of the Criminal Code that is punished as rape, ‘sexual intercourse without consent”.

The judgment of the court of Barcelona, of the 31st of October, were sentenced to terms of 10 to 12 years in prison to five of the six prosecuted for having violated by shifts to a lower one. The incident occurred in 2016, during a botellón in an abandoned factory on the way Torres d in Vineyards. According to the proven facts of the judgment, the group of Manresa raped the minor, who had taken alcohol and drugs. “Not unnoticed” for none of those assembled that the young person was under the age of 16 years, argues the decision of the court, which did not take into account, as requested by the office of the Prosecutor, raise the penalty to sexual assault.

The sentence followed the wake of the controversy initiated with the case of The Herd of Pamplona, after the Navarra Provincial court sentenced them in April 2018 five men for the sexual abuse continued. The failure took out to the street to thousands of people in the main cities of the country.

This Monday, nearly a thousand people had gathered in Valencia in front of the headquarters of the Superior Court of Justice of the Valencian Community. The attendees, mostly women of ages are very diverse, have chanted slogans as: “Enough, already, of justice patriarchal”, “is Not abuse, it’s rape”, “Judges, macho, you are the terrorists,” or “I believe you”. Some carried signs with slogans like “don’t let the patriarchy for tomorrow when you can destroy it today” or “If there is no desire, it is rape,” reports Ignacio Zafra.

In Madrid, the organizers amount to about 400 attendees at the concentration, reports Erika Rosete . “Alone, drunk I want to get home,” sang the protesters, gathered in front of the Ministry of Justice. Holding banners and raised fists. “It’s an outrage. Being unconscious should be an aggravating factor, not a mitigating factor,” says Nina Maqueda, a woman of 65 years which manifests itself in Madrid. “How are you going to defend if you’re unconscious?”, adds. Fernando Luengo is also 65 years old and has joined the protest. “I’m here because you are already more than 59 women murdered this year. And because justice is indecent and patriarchal, because in this case it is unacceptable that it was considered abuse, what is an aggression,” he explains.

In Seville, about a hundred people gathered in the Plaza Nueva, opposite the town Hall, reports Eva Saiz. Is the city in which they lived the five members of The Herd, who are serving a sentence after the Supreme Court dictaminase that in the Sanfermines 2016 committed a sexual assault against a young woman of 18 years. Here, the outrage of the protesters —most of whom are women— is palpable. Some, such as Carmen Fera, a veteran activist of 64 years, he regretted having to go back out to the street to claim the same things they did months ago when he met the ruling of the Hearing of Navarre against the five young locals. “We live in a judgment unfair. With this sister of Manresa has not committed an abuse, but five sexual assaults, which is, as is typified in the Penal Code,” he says. And he warns: “as long As there are women who are truly aware of feminism in the judiciary, these rulings will follow.”

Very close to her and screaming the same proclamations against the righteousness of patriarchal, Elena Velasco, a graduate in Audiovisual Communication of 23 years, explains his presence in the concentration: “If we remain silent, not going to happen nothing, what Manresa is not an interpretation of the law, if you can impose the minimum penalty to the rapist, you are going to impose,” says while adjusting a shirt with the slogan: Thou shall not be a feminnasi dezas.

In Barcelona, close to 500 people have concentrated on the plaza Sant Jaume, to show their rejection to the sentence, reports Laura Cercós. The mobilization was organized by the collective Novembre Feminist, which brings together various entities on the occasion of 25 November, International Day for the Elimination of Violence against Women. “From the feminist movement did a great job against the judgment of the Herd, but it seems that the judges have not learned anything and we have to go back out to the street to denounce it,” explained Montse Cervera, a member of the collective, while the protesters sang songs such as “No aggression without response.”

The organizers have read a manifesto in which called for, in addition to a few laws “more fair,” a comprehensive approach to eradicate the violence of machismo, with particular emphasis on the affective-sex education. These claims were seconded by the platform Lliutes i Combatives, the Students ‘ Union, which deployed two large banners in front of city Hall. “The only way to stop this justice, sexist and fascist is the organization and the massive struggle in the streets”, to defend from the platform.

at The beginning of the rally, the mayor of Barcelona, Ada Colau, came to the square to give support to the claims of feminists, but did not want to make statements to “not take the role”. The concentration has brought together people of all ages, mostly women. Many of the women were consistent in feel “repulsion” and “impotence” to statements such as these. “Despite the frustration, the verdict has given me también want to move around and be on the side of people who feel the same as I”, argues Alexia Barreda, a graduate in Social Education.

Iv Luin - June 5, 2020 0
There was a lot of discussion about Sweden in the current Corona crisis. In contrast to other countries, there were significantly fewer restrictions...