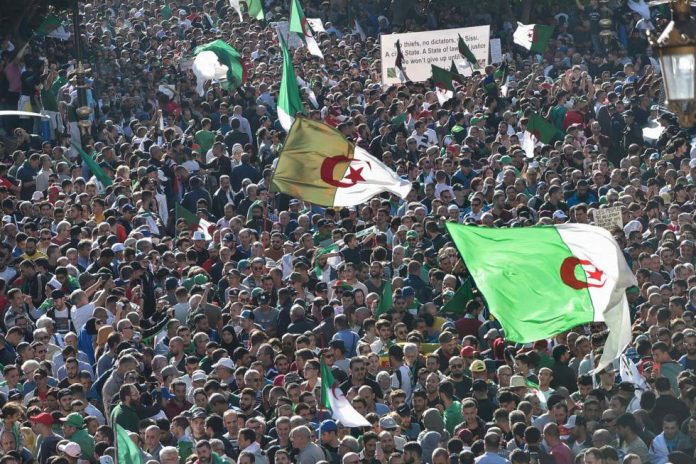 less than six weeks from the presidential elections in algeria, which will be held on the 12th of December, several hundreds of thousands of demonstrators have protested Friday in the capital against the holding of the elections, which they see as a continuation of the old regime of president Abdelaziz Bouteflika.

In this 37th Friday in a row of demonstrations, which has coincided with the 65th anniversary of the beginning of the war of independence against France, in 1954, the Hirak, as it is known to the protest movement, has managed to mobilize citizenship as in the first manifestations of the month of February.

This Thursday, on the eve of the Day of the Revolution, thousands of algerians occupied from the first hour of the night the central square of the Large Post —epicentre of the protests— with the cry of “Algeria will regain its independence”.

The street of Algeria get the regime to annul the presidential elections of July 4, The algerians fear that the new purges of the regime, resulting in military dictatorship, The chief of the Army in Algeria, clinging to the regime inherited from Bouteflika

This Friday, the march was marked by a strong presence of the riot police, who carried out identity checks and inspection of backpacks and, as could verify Efe, the arrest of several protesters following fly the flag amazig (berber), the symbol prohibited by the chief of the Army.

To circumvent security controls that prevent each Friday the access to the capital of those citizens non-residents, many protesters moved to Algiers in the days prior to from different regions of the country.

it Is the case of Faiza and Ouardia, who arrived by train on Thursday morning from Tizi Ouzou (Kabylia), 100 kilometres from Algiers, and they stayed in the home of a friend waiting to participate in the protest. “We’re here because it’s our party and we have also committed to the movement for the liberation of detainees, and by the radical change of this system”, said to Efe Faiza, a professor of Tamazight (a variant of the berber language).

calls to this “historic” have multiplied on social networks during the past few days to demand the departure of the figures of the former regime, as well as the release of hundreds of prisoners of opinion.

In the last 48 hours, both the interim president, Abdelkader Bensalá, as the chief of the Army and strong man of the country, Ahmed Gaid Salah, urged citizens to vote massively in the elections are “crucial” to get the country out of a “sensitive period”, marked by nine months of protests across the country.

A total of 22 candidates were registered officially in the presidential race, among them, two former prime ministers resigned Bouteflika: Ali Benflis, 75 years old and his main opponent in 2004 and 2014, and Abdelmadjid Tebboune, of 72 years and only held the position for three months in 2017.

After the conclusion of this Saturday, the statutory period of registration, the electoral authority has seven days to validate the provisional list of candidates which shall be ratified by the Constitutional Council.

According to the new electoral law, the candidates should have algerian nationality by birth, have a college degree or its equivalent and to collect a minimum of 50,000 signatures of voters in at least 25 of the 48 wilayas (provinces) of the country.

Algeria is the scene of popular demonstrations mass every Friday and every Tuesday from the 22nd of February a group of young people defied the security forces and take to the streets to oppose the re-election for a fifth consecutive mandate of Abdelaziz Bouteflika, seriously ill, from 2013.

Forced to resign by protests and by the pressure of the Army, was replaced by the president of the Senate, Abdelkader Bensalá, who assumed leadership of the State with the commitment of the convening of presidential elections in a period of 90 days. The National Liberation Front (FLN), a single party since independence (1962) until the liberalization policy of 1988, has recently announced that it will not the presidential candidate.